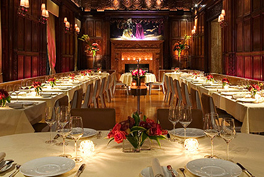 Some of the city’s great mid-size lists can live quietly, tucked into this or that restaurant in Brooklyn, or a neighborhood joint on an awkward stretch of 10th avenue, or a West Village spot the architectural equivalent of a pocket square. But it’s hard to hide a list of 3,000 wines that is as wide as it is deep. Somehow, though, on a not-so-sleepy block of Madison Avenue, Patrick Cappiello’s stunning wine list at Gilt has managed to remain curiously under-the-radar.

It may not be quite as epic as the list at Veritas—where Cappiello spent four prime years pulling corks on more trophy wines than anyone could possibly keep notes on—but in this newer, slimmer era of fine dining, it’s as good as any of the lists at the city’s four star restaurants, if not better.

When Cappiello took over the restaurant’s beverage program in 2009 the list was about 1,000 selections and leaned heavily on Italy and Bordeaux. But Cappiello, coming from a background that also includes Tribeca Grill—where he spent another four years between 2001 and 2005 under David Gordon—wanted to build-out France and stock those trophy Burgundies for that rainy day when the market decided to wake up.

But this list isn’t just about its collection of, say, fancy white Burgundy—which, frankly, is one of the best I’ve ever seen—or iconic Bordeaux. It’s actually one of those rare wine lists that really does have something for everyone. It’s what every sommelier with a budget this big aims to achieve, but it’s no easy feat. Classic lists of this size often ignore big chunks of the contemporary wine world—like those funky, obscure producers from the Loire and beyond that act as poster wines for the non-interventionist movement. But here Cappiello plants those producers—like Agnès & René Mosse and Le Briseau—as lead-ins to the world’s greatest Bordeaux wines. It’s one of several quirk to classic transitions that give this list real personality.

When it comes to California, Cappiello makes sure there’s plenty for both the well-moneyed men who have yet to grow out of their Harlan phase and those that prefer to congregate with California’s more sensitive side; he prescribes equal doses of cult Cabernet and iconic Sonoma Coast Pinot Noir from the likes of Ted Lemon at Littorai and icons-in-the-making like Kevin Kelley at LIOCO.

Back in the Old World, devotees of the many charms of Gamay are rewarded with one of the best collections of cru Beaujolais in town. The Champagne section smartly divides its attention between the big houses and the growers, the collection of Madeira dates back to the turn of the last Century, and there’s more back vintage Barolo than anyone would know what to do with.

You get the idea.

It’s a list that could easily exist at a place like Daniel or Le Bernardin, but, thankfully, it’s at Gilt—a fine dining restaurant for sure, but one that doesn’t carry the fine dining markup. It caters to wine lovers in the same way Eleven Madison Park does, in that there’s as much to gawk at as there is to actually drink. On both the low-end and the high-end there are wines priced much lower than they need to be, and there’s a plenty to get excited about under $100.

Cappiello’s expansion and diversification of this collection is an incredible achievement and one that shouldn’t live quite as quietly as it has, but until he gets the due he deserves, here at Gilt lies the city’s greatest sleeper list.

Bang For Your Buck
2006 Mittnacht Riesling "Rosacker" $70
One of Alsace’s great small producers. The 20-acre estate is farmed using organic and biodynamic practices and the wines, across the board, are stunning values. The “Rosacker” Grand Cru site is one of Alsace’s best (home to Trimbach’s famed ‘Clos St. Hune bottling) and is responsible for complex, powerful Riesling. Stellar value.

2005 Deux Montille St. Romain "En Jarron" $75
Deux Montille is the negociant house run by Alix and Etienne Deux Montille (of Domaine de Montille) that was established to make value wines from villages like St. Aubin and St. Romain, that are often overlooked. Here priced to move from this often overlooked village in the Cote de Beaune. Mineral-driven and nervy - here with a little time in bottle it’s likely to have mellow out a touch.

2008 De Moor Chablis "Rosette" $75
Alice & Olivier De Moor are two of Chablis’ most progressive winemakers; they farm organic and biodynamic and use little to no sulfur, native yeasts, and large Burgundian barrels (and cement and stainless for the young vines Aligoté and steel tanks for their Sauvignon Blanc). Lush by Chablis standards and a wholly unique, mineral-driven riff.

2007 Jean Foillard Morgon "Côte du Py” $65
Foillard is the master when it comes to Morgon and this bottling is often the single greatest argument for the brilliance of Beaujolais. Rarely do you find the wine on a list older that the current release (in this case, that’s 09). Though still young this is a great opportunity to capitalize on the price.

1995 Château Ferrière Margaux 3ème Crus $80
Château Ferrière is a very small chateau by Bdx standards putting out around 4,000 cases per year between this grand vin and its second label. This is an excellent price on very likeable Bordeaux that’s likely coming into its own at 16 years out.

Off The Beaten Path
2005 Clos Rougeard Saumur Champigny "Brézé" $155
Clos Rougeard is one of the most sought after producers of Cabernet Franc in France, but perhaps even more sought after is this 100% Chenin Blanc made using minimal intervention and in quantities undetectable to the human eye. In fact, this is one of the few times we’ve seen this wine on a list.

2000 Hatzimichalis Xinomavro, Naoussa $55
The Xinomavro grape grown mostly in Naoussa in Macedonia is often credited with being similar to nebbiolo (the grape responsible for Barolo and Barbaresco) in its earthy, floral notes, brick-like color, and formidable tannic structure. This is a fine example of the grape’s charms with some age and at a price that hardly resembles anything from Barolo or Barbaresco.

2004 Borgogno Barbera $40
Another rare chance to see how a grape that is often dismissed as suitable only to drink in its youth from one of the standard bearers of traditional value-driven wine in Barolo. Here from one of the region’s great recent vintages. A quirky steal.

Crowd Pleaser
2007 Pépière, "Granite de Clisson" $50
One of the greatest Muscadet bottlings on the market, hands down. The Granite de Clisson is a newer bottling for Ollivier and is sourced from vines planted on granite and spends two years on the lees. The classic Muscadet interplay of nervy acidity and leesy richness at its finest. Two parts Melon de Bourgogne one part magic.

WTF?
If anything it’d be great to see the same amount of great value options in red Burgundy under $100 as you find in white. But, that’s just bordering on greedy.
All Previous Editions of Decanted [~ENY~]
[Photo]