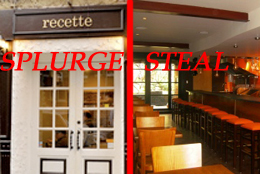 5) Recette/Traif: Jesse Schenker's tiny West Village restaurant Recette has garnered raves for its elegantly composed, flavorful fine dining-style plates. It's a highly personal style of cooking, served in a charming, intimate dining room. But for most people, it's something of a splurge — you're going to want to order three or four dishes (aside from snacks, all menu items are priced in the teens, twenties or low thirties), or opt for the five-course tasting for $75 or seven-course tasting for $100. But for those seeking a unique chef-driven meal in a cozy dining room, at a much more reasonable price, head across the river to Traif, at the lip of the Williamsburg Bridge. The restaurant's chef, Jason Marcus, spent some time in a few of the city's top restaurants, and here he also serves up bright crudo plates, inventive offal dishes, charcuterie, and even a few interesting vegetable creations. You won't find Recette's Black Angus beef strip, but there is a fine steak frites for only $18, and like Recette, the menu is formatted as a list of plates rather than a group of appetizers and entrees. Each item is priced between $6-$18, so you can try a lot for about $30 per person. [Read More: Recette, Traif] (photo) 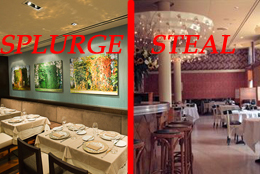 4) Ai Fiori/Nice Matin: Michael White's new restaurant in the Setai hotel is another slam dunk for the chef. Here, he's serving an elegant, deeply satisfying version of French Riviera cuisine. Currently, the restaurant offers a $79 four-course prix fixe, which is a great value, but still a lot of money when wine and service are taken into consideration. So, for another meal of Italian and French-influenced cuisine, in a relaxed, adult setting, head west to Nice Matin on 79th and Amsterdam. You won't find quite the same luxurious noodle dishes that White is famous for, but there are very good plates of tortellini and ravioli for under $10 as apps, and a pasta entree with bacon, dandelion, tomatoes and ricotta for $17. The rest of the menu is a more straight-forward take on the regional cuisine: chicken paillard, mussels with chorizo, sole "Milanese." Those dishes are under $20, and for starters, there are several salads and plates for under $10. Like Ai Fiori, Nice Matin also offers a serious burger, but you can get this one at dinner as well as at lunch. The dining room is comfortable, if far from sexy, but many have said the same thing about White's restaurant, plus there's outdoor seating when the weather is nice. [Read More: Ai Fiori, Nice Matin] (photo, photo) 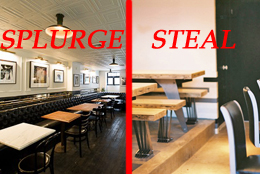 3) Fedora/Mile End: For his re-do of the old Fedora space, Gabe Stulman enlisted chef Mehdi Brunet-Benkritly, a veteran of Montreal's celebrated Au Pied De Cochon. Benkritly's menu is full of ingredients and preparations that don't sound like they'd work together, but so far the critics are saying that everything gels, and that most dishes are full of flavor. A night out at Fedora can be pricey, though — most appetizers are in the teens, most entrees in the high twenties. But, a solid alternative for dynamic food at a much gentler price can be found just a few A-Train stops away at Mile End. At night, this Boerum Hill sandwich shop turns into a showcase for chef Aaron Israel's inventive take on traditional Jewish celebration fare. Israel also has roots in Montreal, and was the sous chef at white-hot Nolita restaurant Torrisi Italian Specialties when they opened. Here you can also get a warm tongue appetizer and beef sandwich (their specialty), and although there's no pork chop or cornish hen and quail to share, Mile End rocks a fairly epic multi-person matzo ball soup. No entrees are over $18 and the apps are all about half that, and like at Fedora, many dishes have surprising flavor combinations that really work. The dining room lacks the swanky, slightly clubby charm of Fedora's space, but it is very cozy, modern and cool in its own way. [Read More: Fedora, Mile End] (photo, photo) 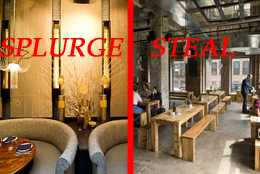 2) Beauty & Essex/The Counting Room: Odds are, if you're headed to the massive new LES restaurant/club/pawn shop from Chris Santos, you're going more for the cocktails/people-watching than for a serious meal out. Although the early word indicates that the menu — a mix of New-American comfort foods with some Asian and Italian influences — is solid, the real show-stoppers are the room, the drinks and the overall vibe of the place. So, for a similarly fun night of drinking and noshing at a much more relaxed price, head to The Counting Room, just a block off the main drag of Bedford Ave in Williamsburg. This cool, bi-level space features a top-notch list of wines by the bottle, glass and half bottle (many of these selections are around $20) and classic cocktails from mixology pro Maks Pazuniak for $8-$11. Like Beauty & Essex, there are also crostini, charcuterie plates, salads and unique soup dishes, but here they're a good five to ten dollars less than what you'll find on the LES. And although there's nothing like Beauty & Essex's chops or stir-frys on the menu here, you can get a serious pork, grilled cheese or Philly cheesesteak sandwiches for $12. The room also boasts an equally attractive clientele. [Read More: The Counting Room, Beauty & Essex] (photo, photo) 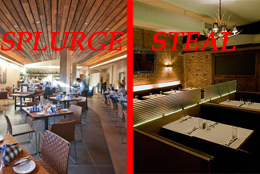 1) David Burke Kitchen/Jo's: David Burke's first foray into downtown dining at the James Hotel in Soho is generating some good buzz, mostly for Burke's menu of sturdy American cooking with a few interesting twists, and the handsome, comfortable room. Every entree is over $20 (many are $30 or more) and starters are in the mid teens, so it's bound to be something of a spendy night out. So, for a meal of familiar classics prepared with a bit of finesse, served in a bustling downtown dining room, head to Jo's in Nolita. There's no big name in the kitchen, but restaurateurs Jim Chu and Johnny Santiago have nailed down a menu that offers a little something for everyone, and the food is consistently right on the money. You can get salads and light seafood dishes to start for around or $10, and as a main course, there are also chops, chicken, pasta and fish dishes for under $20. There's nothing resembling the elegant mixed grill entrees found at David Burke Kitchen, but there is a very good shell steak for $25, and a gem of a cheeseburger for $11. Every entree can also be ordered a la carte, if you like. Sadly, there is nothing to match Burke's wacky, wonderful petits fours stove, but the churro dessert at Jo's is a winner. [Read More: David Burke Kitchen, Jo's] (photos)