Momofuku Ssam Bar Gets A New Face, Trims Down

Share All sharing options for: Momofuku Ssam Bar Gets A New Face, Trims Down 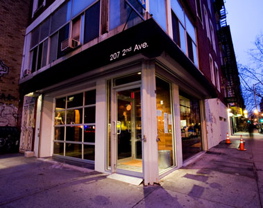 Paopao, former longtime wine director at Boston’s Oleana, joined Momoverse to take over for the recently departed Christina Turley (who has since returned to Napa to work on her own label). In a matter of months Paopao has taken liberties with the list she inherited, turning it into a more user-friendly and affordable collection.

The new single-page, double-sided list of around 200 wines still leans heavily on white wines from Germany and Austria, but takes care to bring the average bottle price down; a noticeable handful of new wines under $40 have been tucked in, and the majority of the list falls under $75.

For those still searching for Bo Ssam and first growth Bordeaux, do not despair: there’s a reserve list, sweetly re-named the “Over The Top List,” available upon request. Here you’ll find anything from ’81 Lafite to ’75 Prum, at prices that don’t sting.

But Momofuku Ssam Bar’s new face doesn’t get giddy about wines of glamour. It’s gone populist and a bit more down to earth, making it a better place to stop in for a bite at the bar and a bottle of something that won’t break the bank. You’ll still find much of the quirk that was formerly a fixture on the list still intact, and some of the back vintage Riesling under $100 still bides, but there’s a bit more variety—particularly when it comes to the more cuisine compatible red wine selection. The only desire left unsatisfied is the need for a bit more Champagne, of which—to be fair—there never seems to enough of anywhere.

Bang For Your Buck
Tocai Friuliano 'Galea,' 2004, I Clivi $49
A rare trinket from the Friulian underground. Organic old vine Tocai and Verduzzo vinified via non-interventionist tactics. Funky, earthy, and dark in color due to extended macerations.

Savennières 'Les Genets,' 2006, Damien Laureau $62
Sturdy, dry Savy with plenty of beef and the intelligent mineral-driven organization to back it up. Under the radar producer that is rarely seen out in the open market. Graceful Cheny despite its size.

Chassagne-Montrachet 1er Cru 'Les Macherelles’ 2004, Jean-Marc Pillot $75
An excellent deal on densely-packed, classic Chassagne from one of the great artisan winemakers. Here from a Burgundian vintage that is all about precision and classicism for the whites.

Picatendro Blend 2007, La Kiuva $39
Hailing from the DOC of Arnad-Montjovet in Italy’s northernmost region of the Valle d’Aosta, this is a blend of Picatendro (the local clone of Nebbiolo) and several other local grapes. Lean, spicy, and high in acid.

Rully 1er Cru ‘Preaux’ 2007, Eric Suremain $66
Great value Burgundy from Rully in the Cote Chalonnaise. Built to drink in its youth, but not without complexity.

Pinot Noir 'Estate Vineyard' 2006, Belle Pente $76
Belle Pente is a small property making Oregon pinot with a distinct nod to Burgundy. The wines are generally quite affordable and offer plenty of trademark Willamette fruit and funk. Here with a few years of bottle age, and showing plenty of complexity for the price.

Off The Beaten Path
Welshriesling Blend 'Tricolis' 2009, Pannonhalmi Apatsagi $40
As Hungary’s importance as a dry wine making region grows, little obscure gems like this blend of Wlechriesling, Riesling, and Gewurztraminer continue to pop up. Clean, mineral-driven.

Under $40
Vermentino (aka Rolle) 'E Prove' 2009, Domaine Maestracci $38
The cool thing about Corsica is that given its geographical location, it plays with an interesting mix of grape varieties from both France and Italy. The wines are no more characteristic of one nation's wines than the other. Here Vermentino at its very finest—clean, salty, mineral-driven.

Crowd Pleaser
Uva di Troia 'Vigna del Melograno' 2007, Santa Lucia $36
Excellent deal on traditionally produced Uva di Troia, an ancient grape said to have been brought to Italy, like many other varieties, by the Greeks way back when. Bright and fruit forward, but avoids the jamminess to which some Puglian wines fall victim.

Gevrey-Chambertain Grand Cru ‘Clos de Bèze’ 1999, Bruno Clair $225
Bruno Clair is one of Burgundy’s great talents and this is simply great, classic Pinot Noir. Just coming into it’s own and will give it up with a decant.

The “Over The Top” List
The list of high-end wines, many with plenty of wisdom are available upon request. Highlights include but are not limited to things like ’95 Raveneau Blanchots at $340, ’75 JJ Prum Riesling Auslese ‘Wehlener Sonnenuhr’ at $324, and so on.

WTF?
The list is tight and well thought out, and there’s nothing simply freeloading. If anything it’d be nice to have more bubbly to choose from with this kind of cuisine.