Share All sharing options for: 24 Hour Goodness At Veselka

Welcome to Dining After Dark, where we pay tribute to the best places to feast after a night on the town. Today is Veselka, the East Village's Ukrainian dining institution. Got a suggestion or a favorite to share? Do let us know. 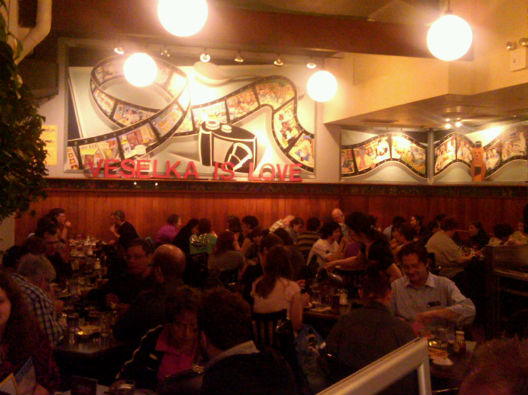 The East Village dining scene certainly doesn't lack for variety except in one area. Quality diners. Travel to the West Village or above 14th Street and one can find a plethora of 24 hour diners serving up all of your favorites 365 days a year. But it's easier to find a breast milk milkshake than a classic diner in the neighborhood. This is where Veselka comes in. Since 1954, this Ukrainian powerhouse has been a beacon for those looking for something soulful and hearty after a drink or six without giving in to the temptations of the bodega sandwich or a slice shop. And while it certainly isn't as fast as your average greasy spoon, the food is well worth the wait.

So what makes it a worthy stopping place after a night on the town? Good question. Veselka is so much more than your average greasy spoon found in some other part of the City. It's a place where your fellow drinkers come to keep their party going just a little bit longer, in a restaurant that bathes diners in soft lighting that allows you to gently adjust from the dark bar that you've been in for the past four hours. Veselka also sells beer until 4 AM, allowing you to fit in one more drink while enjoying your meal. And what a meal it is. Veselka's menu is based in Ukrainian classics, which means that you can also get an order of amazing pierogis, blintzes, borscht or stuffed cabbage. But you will be just as happy ordering a sausage egg and cheese or burger.

The wild card in the whole thing is the crowd inside. Given the location and the 24/7 nature, there is a chance that you can get one of those only in New York moments where couples fight, drunk girls dancing and singing, and maybe some inappropriate making out. And the giant wrap-around windows give you an up close view of the other drunks meandering home. It's a scene that really can't be beat.

Veselka is about to open a second location on the Bowery any day now, a venture that may change the dynamic at the original location. But until that time, go enjoy a New York late night dining institution.
· Dining After Dark [~ENY~]
· Veselka Coverage [~ENY~]
· Nightlife [~ENY~]