On this most special of drinking days in New York, Eater is coming to you live from one of the city oldest bars and arguably the headquarters for all St. Patrick's Day merriment, McSorley's. She opened at 8 AM today and will be full to the brim until closing time. Have a tip to add to the live blog? Send it here. 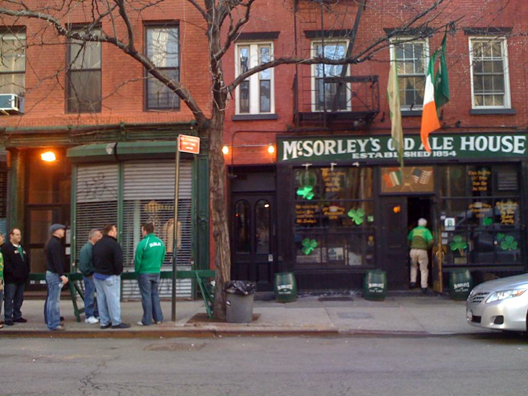 7:45: Top o' the morning to ya! Touched down at McSorley's. Already a major crowd. When I went to snap a pic, people started cheering, one asked to see my boobs. Will likely be a rowdy morning.

7:50: The people in front of me in line said they had been there for 25 minutes.
A man and a woman in line just recognized each other from last year at McSorley's. Clearly hazy memories.

8 AM, OPENING TIME: Four dudes just got out of a cab. Had to make the 8 AM mark...fair enough. 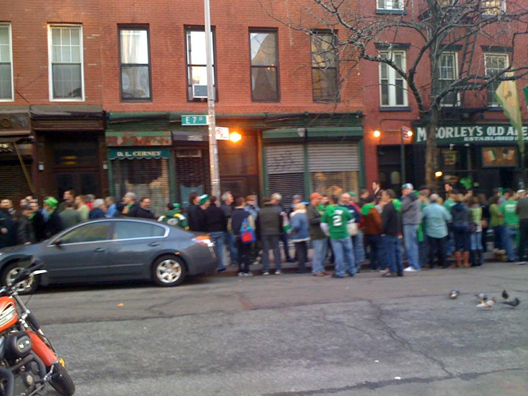 8:20: The three men I'm sitting with come from Connecticut every year and have been coming for 11 years (one wanted to mention that he is not actually B&T and this is his first year, for what it's worth). They explained their St. Patty's day ritual: wake up at 4 AM, get on Metro North at 4:45, Grand Central at 5:45, cab it to McSorley's, in line by 6 AM. When they get there, there are usually 25 - 30 people in front of them. 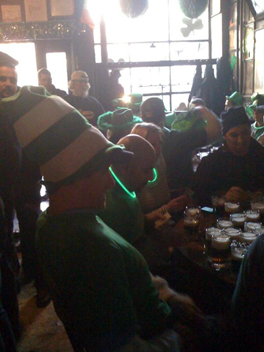 8:41: Just spoke to Brian L from Jersey. It's only his second year here but after last year he had to come back. He said this year he plans to pace himself.

8:47: Please do check in to McSorley's.TV for live coverage throughout the day. It compiles all tweets with the #mcsorleys hashtag. Mostly, the tweets have been about the line. But soon enough they'll be about public drunkeness.

8:51: More hats and beads with mini mugs have been passed around. I just took a drink out of the necklace—it tasted delicious. 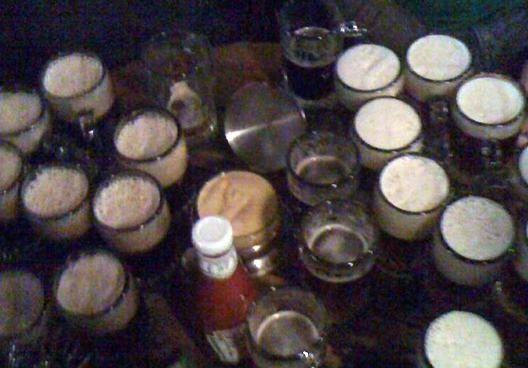 9 AM: A man just apologized for possibly offending me. Did not even hear what he said so...definitely getting louder in here.

9:21: A man named Paul, a lawyer, stood in line from 6 - 7:40, left to go to a meeting, and is en route back now. That's some serious dedication. (I learned this while talking to his two other lawyer friends.)

9:30: People are discussing their favorite St. Patrick's Day waiting in line breakfasts. Ray's and street doughnuts are popular options. Oh and Paul just arrived. he said it was good that he went to the meeting. He's been coming here on St. Pats for 18 years.

9:35: Damages due to early morning drunken rowdiness: My coat is pretty wet in areas and a man nearly broke my nail as he walked past me.

9:45: Talking to several people about their first time here, and they say if you arrive around 9 or 10 you could end up waiting hours to get in. The key is to show up early. Bonus of extra camaraderie. There are zero seats at this point. 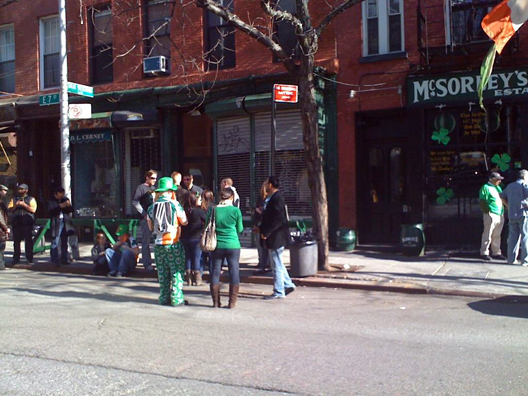 10 AM: 17 people in line. Another round of God Bless America, and I'm trying to find the bathroom guy in response to this tweet.

10:23: So someone on twitter asked who cleans that bathroom after all this. Management says it's actually not so bad on St. Patrick's Day, and the same guy on staff that does it every night at 1 AM does it. That said he said he'd pay me $200 to do it tonight. Considering it...Oh also, there is no line for the ladies room, a dream.

10:45: Male to female ratio: 15:1. They're also chanting, alternately, "Let's Go Yankees" and "Yankees Suck." Someone just asked me to tell the people to stop chanting English in and Irish bar.

10:58: Someone just gave me a bite of their corned beef and cabbage. Shocked at how delicious it is. 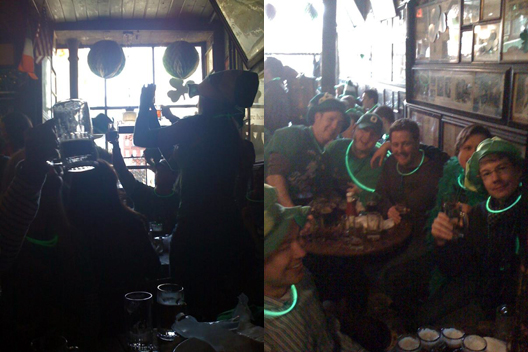 11:42: Surprised at how many people know my name and recognize me as I walk through the bar. Really friendly drunken environment. People keep coming over and saying where they're sitting so you can go say hello later. Party!

11:50: Not to point out the obvious but it's almost noon and no one around me is sober. Also my swag so far: green hat, green boa, four strands of beads with mini pint glasses. Also someone who goes by the name of Barsky found me to apologize for maybe offending me before. I don't know what he's talking about.

12:03: Just asked the bartender how he's doing. His response: "How do you think I'm doing? Have fun and keep your legs closed."

12:25: Brandon Fey, who runs Trattoria Dell'Arte in Midtown: "I'm with my best friends. It's amazing we come here every year. There's usually a line but we can come right in, and I always get corned beef and cabbage and a lot of beer. It's my home away from home.

12:37: Want to know what's on the menu at McSorley's? Serious Eats takes a look at their cheese plate, corned beef and hash, liverwurt sandwich, burger, and chili. 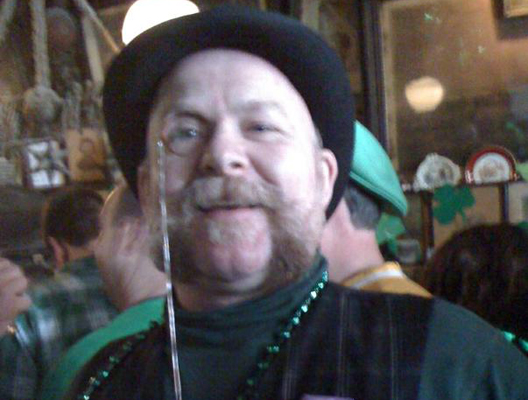 2:16: Just got back from a lunch break and the crowd is getting way frattier. Also I just saw my first person stumble. Line is about a dozen deep.

3:12: Ed note: Team Eater just got back from visiting Jackie at McSorley's to buy her a beer. Not necessary! People have been passing her drinks all day. Also spotted: a guy in a kilt, a green mohawk, a green beard, lots of sports themed green shirts, and a green Grateful Dead shirt. More women are there during the post lunch shift.

3:20: Time to close up shop. A final word from intern Jackie: After a good seven hours of fraternizing, beer, and singing, my day at McSorley's has come to a close. I made friends, gained some twitter followers, and had an amazing time. I will be back next year.
Coverage coming to you from Eater intern extraordinaire Jackie Goldstein.