Lots of Value At Kin Shop & Perilla, But Beware of Hitchhikers

Share All sharing options for: Lots of Value At Kin Shop & Perilla, But Beware of Hitchhikers 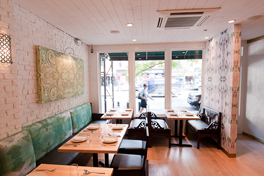 Just two years ago Perilla’s wine list—originally the handiwork of co-owner and GM, Alicia Nosenzo—had more wines under $30 than the Olive Garden. Over the years, the wine list has migrated to a higher average price point, but remains one of the more well-stocked lists for wines under $50.

The current list—now under the direction of Somer Perez, former Beverage Manager at The Hotel on Rivington and The Royalton—has built on the value-driven, equal-opportunity philosophy that Nosenzo instilled with only moderate success.

The new version of the globetrotting list gives a bit more real estate to places like Australia, South Africa, and the U.S., but has picked up a few too many hitchhikers that should have been left thumbing it. What’s also gone is the handful of wines with a little age under $100, which was one of the small pleasures of Perilla’s former list. What remains, however, is an inconsistent method of listing the wines (sometimes by variety and region, variety and country, and sometimes just by region); it can play tricks on you if you don’t come armed with a working knowledge of, say, the Loire Valley.

Still, despite its hiccups, Perez’s list stays true to the restaurant’s value quest and offers plenty of wines in the $40-60 range (the list’s new sweet spot) that may not excite, but will certainly satisfy.

Up the block at Nosenzo and Chef Harold Dieterle’s newest project, the neo-Thai restaurant Kin Shop, the list looks a bit more akin to the Perilla list of old. Here you’ll find an abbreviated assortment of wines from around the globe, with a focus on whites to cool the heat of the cuisine. Though the selections don’t dip down into the $20s this time around, almost all of the wines fall under $60. It’s also home to a handful of selections with a dose of quirk and a fine selection of value-driven sparkling wines courtesy of the restaurant’s current Beverage Manager, Julia Travis.

As it stands, there is more at Kin Shop that will prove exciting with the food, and less that feels like it doesn’t need to be along for the ride. But both lists fit their respective restaurants and uphold their commendable quest for value.

Perilla
Bang For Your Buck
Riesling Trocken ‘Mussbach’ 2009, Muller Catoir $60
The Muller-Catoir wines from the 2009 vintage are some of the best in recent memory. This entry level dry Riesling is an excellent introduction to the style: mineral-driven, lithe, and versatile.

Riesling Smaragd ‘Offenberg’ 2004, Donabaum $65
Johann Donabaum (who is only 26 years-old) is one of the up and comers hailing from the coolest corner of the Wachau, an area known for its dry Riesling. This is beyond a great value, as his newest releases are now retailing at this cost. Order before the secret is out.

Roero ‘Mompissano’ 2006, Ca’ Rossa $59
100% Nebbiolo from Roero, an area north of the grape’s spiritual homes in both Barolo and Barbaresco. Here you find tremendous deals on Nebbiolo that tend to be a bit less powerful and more approachable. This spends a significant amount of time in large barrels and is built for midterm cellaring, but will drink well now.

Break The Bank
Meursault ‘Clos de Mazeray’ 2004, Jacques Prieur $145
There isn’t much on the list that will really put a dent in the pocketbook, but this is worth the splurge if you’re in the mood for solid Meursault from a lean, classic vintage.

WTF?
Gavi di Gavi 2008, Marchesi di Barolo $67
Priced too high and not even close to worth the price. Save some coin and go for the Muller-Catoir or Donabaum Rieslings instead.

Kin Shop
Bang For Your Buck
Champagne Cuvee Reserve NV, Hebrart $74
One of the most exciting new producers working in Champagne, Hebrart’s wines are consistently some of better values out of the region. This is primarily Pinot Noir with about 20% Chardonnay, and will drink well with a little time to open.

Gemischter Satz 2008, Hajszan $55
Rarely reputed as more than local swill, this centuries-old Austrian field blend (up to 20 varietals from the same vineyard) is in high renaissance. Clean, aromatic, and funnel-worthy.

Gruner Veltliner ‘Kamptaler Terrassen’ 2009, Brundlmayer $46
Gruner...the hipster-wine-du-jour of a few years back has finally settled into its rightful place. Brundlmayer’s wines are known for their zip and purity and this is no exception. Archetypal Gruner from the Kamptal.

Priorat ‘Camins’ 2008, Alvaro Palacios $50
An excellent opportunity to experience Priorat – here from one of Spain’s great winemakers – at a price that is very un-Priorat. Lush, approachable, and mineral-driven.

Crowd Pleaser
Asyritiko 2009, Domaine Sigalas $49
The island of Santorini has been producing some amazingly crisp, clean whites for centuries and we have finally caught on. Think Sancerre or Chablis; great acidity and trademark chalky minerality.

Off The Beaten Path
Thailand Pokdum/Shiraz Blend 2008, Monsoon Wines $31
No idea if this is drinkable, but points for going way outside the box. Thankfully it’s priced quite low so if it turns out tasting like turpentine, it won’t sting too, too much.

Under $40
Pinot Noir 2008, Becker $38
German Pinot Noir (or Spätburgunder) is becoming a bit of novelty item these days and for good reason. The wines coming out of Germany’s cool vineyard sites are lean, delicate and well-suited to food. Here, an excellent value from one of the best Pinot producers in the country.

Pinot Noir 2008, Failla $75
Failla is only a few years old, but they are already catching fire. The fact that their winemaker is Ehren Jordan of Turley doesn’t hurt, but it’s the wines that are the real draw. Restrained and old-world in style, bottled unfined and filtered with minimal new oak. These wines achieve a level of finesse not often seen outside of Burgundy.

WTF?
If anything it’d be nice to have a few more old world selections on the higher end in the reds department, at present there are only two and they are both CA reds?