As we know, many of the country's most beloved chain restaurants do not have locations in New York City. But, if you want the flavor of one of your old franchise favorites in Manhattan, fear not: there are many fine eateries in this city that can give you the same experience of dining at a strip mall classic, but with generally better food, and a more artful sense of kitsch. Here are 10 alternatives to the big chain restaurants missing from New York. 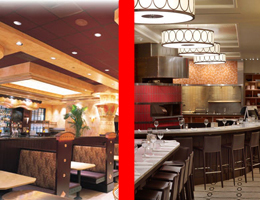 10) The Cheesecake Factory/The Plaza Food Hall by Todd English: There's only one place in New York where you can get pizzas, pastas, Asian specialties, burgers, sandwiches, salads, roasted chicken, chops, seafood dishes, fancy mac and cheese, and many, many desserts all under one roof: The Plaza Food Hall by Todd English. The decor here also features lots of browns, creams, brass and wicker, the only downside is that they don't use those reservation buzzers. For that part of the chain restaurant experience, you'll have to head south to Beauty & Essex. [Photo, Photo] 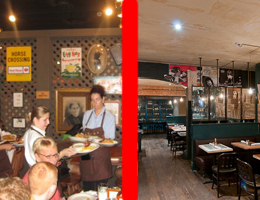 9) Cracker Barrel/Lowcountry: It's not located off an interstate, and there's no rocking chairs, but Lowcountry in the West Village has a similar menu of southern-style food, served in a somewhat dark dining room with a bunch of old junk on the walls (at Lowcountry, it's records, not portraits of guys with mustaches). You can get fried chicken w/gravy, catfish, a pork chop, and on the weekends, there's even a "Country Breakfast" that bears a striking resemblance to the CB's "Grandpa's Country Fried Breakfast." There's no general store in the front of Lowcountry, but you can get audio books at nearby Three Lives, and any number of tchotchkes on the main tourist drag of Bleeker St., just a few blocks away. [Photo, Photo] 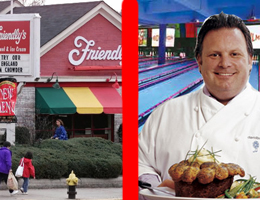 8) Friendly's/Stadium Grill: Friendly's is notable in the world of chain restaurants for its bizarre, sometimes creative junk food mash-ups. It's the place that invented The Fishamajig, Jumbo Fronions, mac and cheese quesadilla and the (awesome) Watermelon Roll dessert. So, naturally, its New York counterpart is going to have to be some sort of David Burke restaurant, and in this case, the closest match is his new bowling alley eatery, Stadium Grill. Here, the menu highlights include a tuna tartare parfait, an open-face chicken napoleon sandwich, and a filet mignon grilled cheese sandwich topped with bacon and a fried egg. [Photo] 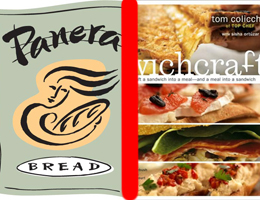 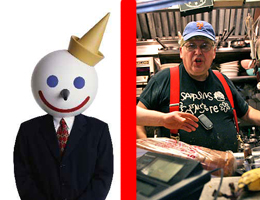 6) Jack in the Box/Shopsin's: Jack in the Box is so much more than just a burger joint: they also have tacos, chicken fajita pitas, rice bowls, chimichangas, fish and chips and other deep-fried delicacies. Really, the only New York restaurant with the same wide array of whacked-out, multi-cultural comfort foods is Shopsin's in the Essex St. Market. Kenny doesn't wear a tiny Pinocchio hat on his head, but he's just as much of a cartoonish character as "Jack," and his food is often times just as questionable where the health department is concerned. [Photo, Photo] 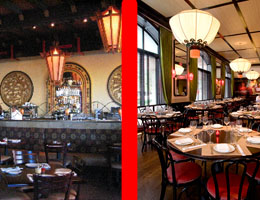 5) P.F. Chang's China Bistro/Chinatown Brasserie: P.F. Chang's and Chinatown Brasserie are basically restaurant brothers from another mother. The food and the vibe at the Noho place is WAY better than anything you'll find at Chang's, but they both serve satisfying Chinese and Chinese-American dishes in theatrical dining rooms, and both are "date night favorites." Chinatown Brasserie does not have that damn addictive lettuce and chicken wrap appetizer, but the expansive list of excellent dim sum options more than makes up for it. [Photo, Photo] 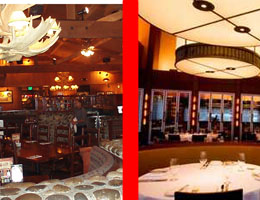 4) Claim Jumper/Bar Americain: The menu at Claim Jumper, a modern American saloon, is mostly full of steak and seafood dishes, with a few southwestern items, pizzas, pastas, salads and sandwiches — just like Bobby Flay's flagship Midtown eatery! Both places are also weirdly expensive, and the favorite restaurants of ladies who like to take half of whatever they order home with them in a doggie bag.[Photo, Photo] 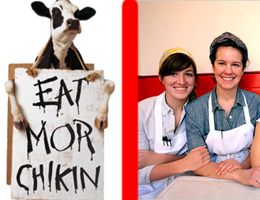 3) Chick-Fil-A/Pies 'N' Thighs: Yes, there is one Chick-Fil-A in NYC, but it's in an NYU cafeteria, so if you don't have a student ID you're not getting in. But for those seeking a deliciously fried and spiced chicken breast on a buttery, flakey biscuit, Pies-N-Thighs is the place to go. At this fast casual Williamsburg restaurant, you can also order coleslaw, fries and a salad on the side, and of course, country-style pies and treats. As a bonus, Pies-N-Thighs is actually open on Sundays, and they don't have an illiterate cow for a mascot, just cute girls in bandanas. [Photo, Photo] 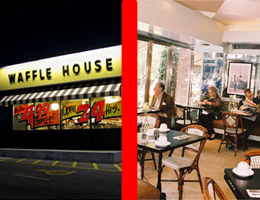 2) Waffle House/Sarabeth's: People love Waffle House because you can get eggs, pancakes, waffles, melts, sandwiches, steaks, and other American grub, cooked the same way, in the same dining room, no matter where you go. It's much more expensive (and mom-friendly), but New Yorkers love Sarabeth's for the exact same reason: whether you're on the east side, the west side, Central Park South, or in Manhasset or Garden City, New Jersey, it's the same comfort food experience. [Photo, Photo] 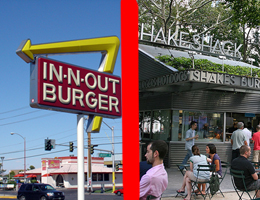 1) In-N-Out/Shake Shack: We're getting closer, but there's still no In-N-Out in NYC, and it makes people angry. But, let's look at the bright side of things: Shake Shack is rapidly expanding to a neighborhood near you, and the burgers, shakes and fries are some of the best in the city, and only a few dollars more than what's being served at California's favorite fast food chain. Actually, maybe it's good there's no In-N-Out in NYC. It gives New Yorkers a reason to go to LA. [Photo, Photo]
· Previously: 10 Chain Restaurants that Should Come to NYC [~ENY~]