Welcome to Eater Dream Journal, where we ask chefs and restaurateurs to write down their dreams for a few days and then share them with us. Today: Korilla BBQ founder Edward "3D" Song. 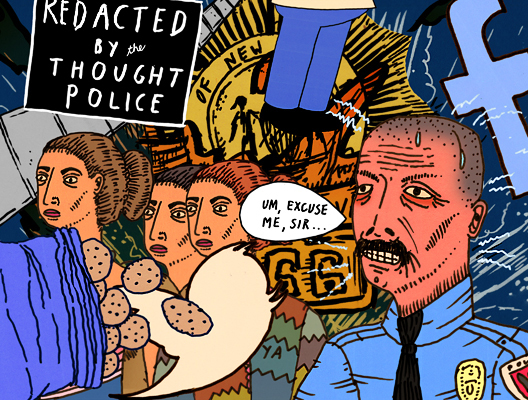 [Original artwork by Eric Lebofsky]
Monday
I’m inside a bodega in the backroom meeting with a buyer. We talk and shoot the shit all the while trying to feel him out. He seems cool, perhaps too cool. I step out telling him I’m going to grab some cookies from the store. (BTW, I love cookies.) I purposely take more time than is needed to scope out the bodega. All is calm. We go through with the transaction and from the corner of my eye I see two guys who do not look like they’re just hanging out. Even more alarming is when one of them reaches into their pockets and pulls out a badge. We split like peas and I’m running, hopping fences, jumping over shit.

I must’ve been running uphill because the sidewalk becomes a ninety degree incline. Now I’m crawling/climbing the sidewalk. I hear a voice coming from a house nearby telling me to hide here. I enter and three ladies, triplets by the names (phonetically) of ‘kee-ya’, ‘dee-ya’, ‘see-ya’ give me refuge. It’s all hot milk and cookies after that.

Afterthought: This might have been my subconscious telling me to name our three trucks, Kia, Dodge and Chevy but more likely it’s the excitement of our new trucks.

?Wednesday
It’s a sunny day out and we’re out in Union Square. A bunch of us are shopping and I notice something is off. I can’t pinpoint what it is for a while but it’s something new and different, kind of like the first time you facebooked or tweeted. At this point I realize I am dreaming and figure this is one of those vision/epiphany type shit. I try hard to figure out what we are doing and finally figure it out. Last thing I remember is telling myself you better not forget this idea.

Afterthought: You know that Simpson’s episode when a dreaming Homer is in a board room meeting and a milion dollar idea is being presented but somebody is blocking his view? This was that type of dream. The idea had to do with commercializing our own social networks in an off-line retail sense, kind of like what foursquare should be doing instead of trying to make money for themselves.

Thursday
We’re back in college, chilling in our apartment a/k/a crack den. (There were a lot of crackheads in my ‘hood.) Doing the usual college stuff like getting higher education outside of class when all of a sudden cops bust into our pad, gangbusters style. Taken aback I’m like "What the hell, ain’t this a bitch I should’ve just gone to class!" I quickly resign to the fact that we’re going to bookings tonight. But the cops look just as anxious. After a few tense moments, they ask if we have seen a suspect they’re looking for. We all chime in saying no but I think he went “that” way. They roll out and we breathe easy.