What happens when a bouncer tries to forcibly remove two patrons from a VIP section when one of his co-workers accuses them of groping her? When those two people are friends with Rashidah Ali, a "shoe consultant" and cast member of "Real Housewives of Atlanta", the bouncer gets mauled. According to the Daily News, Greenhouse bouncer Joseph Wright was removing two men from the club's VIP area after the waitress accused them of trying to feel her up. Wright says that Ali suddenly rushed him, saying she was "clawing over my eye, at my face, and I didn't feel anything at first....Then I realized I felt the blood dripping down my shirt. I was leaking." Wright was taken to the emergency room, where he underwent surgery and needed 50 stitches to patch up his face (see photo). Ali and her entourage apparently fled the club in sports cars after the incident. All in all, it sounds like another great night at Greenhouse, the most dangerous club in New York. 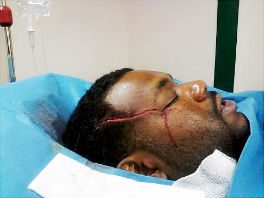