Although the dining rooms of the city are filled with many happy couples, they are also inhabited by lovesick diners looking to catch the eye of that special someone. Sometimes, these people take to Craigslist, to try and find that guy or girl who they saw from across the dining room, but weren’t able to muster the courage to say something to. Here now are a few restaurant missed connections — perhaps love is on the menu for these lonely people sometime soon.

STAR-CROSSED CLUBBERS —Saturday night at Beauty & Essex - Sabrina - m4w: You sat down at your booth next to the DJ, which my friend and I had unknowingly invaded. The music was too loud to have any serious conversation. You tried and failed to get my friend to drink something stronger than champagne. Later on we had some fun dancing until your friends stepped in and whisked you away. Who are you Sabrina with the pink Blackberry and raven hair? Will our paths cross again in some happy future? [Photo] 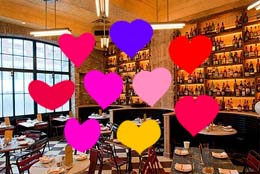 TAKE ANOTHER LITTLE PIZZA MY HEART — Pulino's Pizzeria Bathroom - Biutiful - w4m: Figured I would try this out - I met you in the bathroom at Pulino's on the LES Monday night but was on a blind date so I couldn't flirt with you as much as I wanted to. You were very friendly and cute and I wanted to talk to you more. If you happen to see this, drop me a line. (PS the date was just ok!) [Photo] 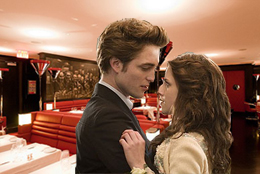 FANCY FOOTWORK— You liked me shoes at Lamb's Club - m4m - 47: My dad and I were having dinner on Monday night at the Lamb's Club near Times Square. You were with a female friend in the center of the restaurant. You commented on my shoes when we were leaving, would have loved to stick around and buy you a drink after but we were both tied up. I know it's somewhat lame, but gosh you were kinda cute. Tell me what kind of shoes I had on and we'll go from there. Am in the city until Thursday PM. [Photo] 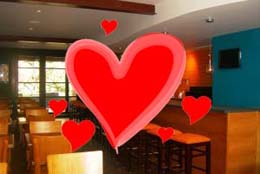 A NON-KOSHER ROMANCE —Traif waiter named Danny - m4m - 23 My three friends and I had dinner at Traif tonight, and you were our waiter. Your name was Danny and you were super nice and super good-looking. I was totally checking you out the whole night and we managed to make some smiling eye contact every time you came around. I was too shy to let it show that I was into you. I don't know if you're interested or not, but I would love to hang out with you sometime. [Photo]

BRITISH GASTROLOVE—Dave at Wilfie and Nell - w4m - 29: A few Thursdays ago, we talked for over an hour on the bar at Wilfie and Nell. You had dark hair and a gray sweater. I'm blonde and wore a black dress and cardigan. You took my number and kissed me on the cheek. I am wondering if I did something to discourage you from calling? Thought we made a connection, but now it's looking more like we missed one... [Photo] 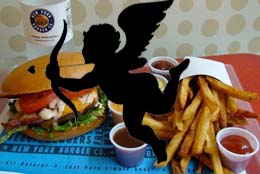 BURGER WITH A SIDE OF INTRIGUE— Short-haired beauty at New York Burger Co. - m4w: You were behind me in line at 8 p.m. Friday at the Park Avenue/23rd Street location, but I let you go ahead of me so as not to filibuster. We exchanged looks and smiles a few times, and though we sat at different ends of the restaurant, you stopped to smile and say "goodbye" before you left. Next time let's plan on doing something together on purpose and get to know each other! [Photo]
· All Previous Editions of Restaurant Missed Connections [~ENY~]