Share All sharing options for: Recipes from The Dutch, Huang's B-Day, Andrea's Journal

A lot of New York chefs are on Twitter these days, but a few actually keep straight up, old fashioned, blogs. Naturally, many of these have to do with food, but sometimes they also offer a glimpse into their lives outside the kitchen, too. Here's a roundup of what's new and good on the NYC chef and restaurant blogs these days. 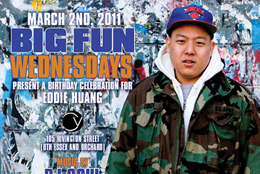 Eddie Huang: On his Fresh Off the Boat blog, the BaoHaus chef/owner and budding food personality continues to post the usual mix of sports commentary, music videos, thoughts on the media, thoughts on the media's thoughts on him, and also some pictures of what he ate for dinner. He also dropped this flyer for his birthday party over weekend, with the note: "I told myself: money, power, get yourself on a hood party flyer. We goin HAM. Erryone's invited. Bring your whole crew, leave the gun, bring the cannoli. Go Knicks." [Fresh Off the Boat] 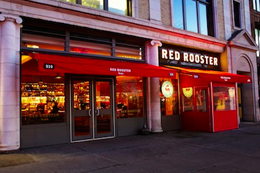 MarcusSamuelsson.com: The homepage of Marcus Samuelsson's site has slowly morphed into a food blog with editors contributing interviews, news pieces, articles on trends, and dish and drink recipes. The most interesting thing here is the weekly column by Red Rooster executive chef Andrea Bergquist. In "Andrea's Journal," she writes candidly about the day-to-day operations at the restaurant. So far, she's filed entries about letting go of staff, the challenges of being a woman in an NYC kitchen, creating a balanced menu, and the stories behind the Red Rooster dishes. [MarcusSamuelsson.com]
George Mendes: Did you know that George Mendes has a blog? It's actually more like a fancy website that's updated frequently, but if you're a fan of this ambitious, very talented chef, it's worth checking out. There's some new savory dish photos, a nice piece on George's personal history (with baby pictures), and also this snappy new video promo for the restaurant (it's sort of like the SNL opening credits):

At Aldea from daniel finkler on Vimeo. 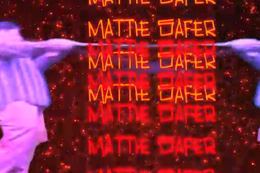 Odds and Ends from Around the Chef Blogosphere: Amanda Cohen keeps chronicling the boring family meals at her restaurant Dirt Candy, 5 Napkin Burger just launched a slick but dull "bourbon and beer blog" with videos about brewers and distillers, pop-up Fatty Johnson's also keeps a (more amusing) spirits-oriented Tumblr featuring clips of their rotating bartenders mixing drinks, the Lure Fishbar site has been posting music lately, including hits by The Specials, New Order, and some 90s soul tunes, and the Roberta's guys just dropped a warped new video invite for a party they're throwing soon.
· All Chefs Blogs Coverage [~ENY~]