Welcome to Eater Dream Journal, where we ask chefs and restaurateurs to write down their dreams for a week and then share them with us. First up: Brandon Hoy, co-owner of Roberta's in Bushwick. You may know him as one member of Team Awesome Space Pizza. 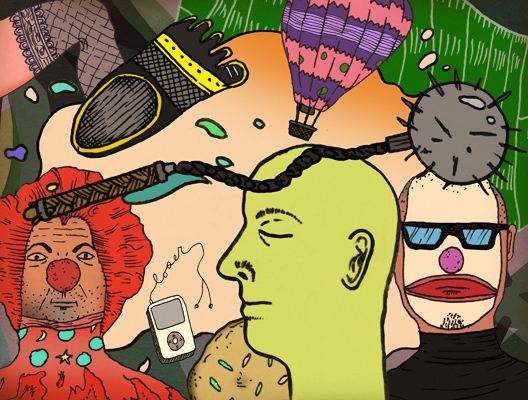 [Original artwork by Eric Lebofsky]
Thursday, February 17
I was on a bus with a bunch of other people I knew. It was rowdy. Everyone was showing off their weapons—a lot of broad swords and maces. Then all of a sudden we were at a football game and we all had our faces painted. I don't remember who was playing but the game was good. Then we were all fighting in a war. It was a little bit like Braveheart but there were garbage can fires everywhere and burnt-out cars. Reality Note: Yesterday I fell while I was running a foot race with Patrick Martins (of Heritage Foods USA and Heritage Radio Network) and hurt my arm; my arm was bothering me in my dream.

Friday, February 18
Okay, this shit is weird. There was an antique roll top desk that I was obsessed with in a room that smelled like sugar cookies—yum. I saw a commercial about up-and-coming fashion designers; they wrote their names in the sand and then a wave washed it away. Anthony Falco (aka “the Pizza Guru”) was one of the designers and he was boasting a sweet fleece vest and his trademark ponytail. He looked like a skinny Mario Batali. One of the other designers was a hot young girl from Nashville and her favorite drink was an Amaretto sour. I was playing with a soggy ball. I kept throwing it against the window. Reality Note: It was Fashion Week the week before and Roberta’s threw a sick party at Milk Studios.

Saturday, February 19
Okay, so we—a bunch of faceless people—were putting on a concert at what seemed to be a college gymnasium. There was some sign painting going on and a decoration committee running around stressing me out. The acts were rap artists geared for young people. Angelo Romano and Carlo Mirarchi where there giving me shit. I made a playlist that I thought was super baller but when it played it made me feel old and Angelo laughed at me. I felt like I got pantsed in front of everyone. Then the show went off and everyone partied till I woke up.

Sunday, February 20
So, I can’t remember much from last night. There was a white wall and I was writing on it and I was in the woods for a little while. The end.

Monday, February 21
Skateboarder/actor Jason Lee jumped a bike with no tires into a pile of barbed wire and a crowd went wild. Carlo Mirarchi, Chris Parchini and I met a gay man who owned a strip mall. He asked us if we wanted a space for the summer for free. The space was between a tattoo parlor and a music store. He didn't care what we did with it so we painted it all Jackson Pollock and started selling ninja gear. It was a hair salon before we took over and all the chairs were still there. We would pump them all the way up and race them. Eventually the place became the most popular bar ever and famous clowns were hanging out there. We put in a stripper poll and that's when thing went south. All the clowns became degenerate gamblers and the strippers were smoking speed out front. Our landlord loved it, but I felt like I needed to take a shower. My alarm went off.

Tuesday, February 22
There was a weird pulsating blue light and then a bunch of hot air balloons landed. Then I was at a strip club in what seemed to be Portland, Oregon, and I was drinking wine.

Wednesday, February 23
Finally, I had a dirty sex dream. I will spare you the details.