Share All sharing options for: Edible Schoolyard Party at The Odeon; Montenapo Shuttered

Do join us tomorrow morning for the debut of Eater Weekends. Wild times are assured. Until then, a little EaterWire to close out the workweek. 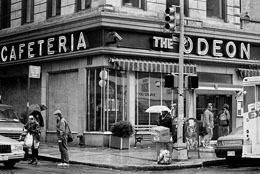 LOWER EAST SIDE— Grub Street learns that Sean Scotese, chef at the short-lived Eastern Alley, is planning a new Chinese restaurant downtown, slated to open this summer. You can preview some dishes he's working on at a $65 six-course dinner series he's doing at DessertTruck Works, which includes three wine pairings. [GS]

TIMES SQUARE — Montenapo, the Italian restaurant in the New York Times building, has closed. This is the second time the restaurant has shuttered in the last 20 months. The last owner notes: “We tried our best to make this property work. I don't think there is anyone to blame outside the economy.” The space has been returned to the landlord. [Crain's]
[photo credit]