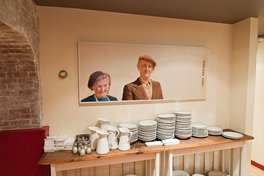 Sometimes good things come in small packages. And sometimes, despite how good the contents of said package are, you can’t help but wish it were a little bit bigger.

Such is the case with the one page wine list attached to Sara Jenkins’ new East Village restaurant, Porsena. Jenkins has assembled the list of what she likes to call “picnic table wines” with the help of her friend and Lupa alum Zach Shapiro.

Thanks to Shapiro, Porsena’s picnic table comes littered with value-driven regional Italian wines, a category that is becoming ever more provocative as the march of viticultural progress is flipping over stones in every corner of the country.

The wines are well-chosen, favoring the classic over the particularly obscure, but not without making room for an odd-ball or two. The draw, however, is the average price point, which pretty much guarantees that you will get in and out with a great bottle of wine for less than $50. If you’re really trying to keep it lean, dig into the wines-by-the-glass, which are hardly a collection of inoffensive after thoughts; a glass of Colli di Serrapetrona Vernaccia Nera for $10, is proof.

Porsena's list is a pint-sized ode to the rustic pleasures of Italy’s table wines, which, by virtue of its concept, makes it easy to crave more. But that’s a greedy gripe, if one can even call it one. Even at just 40 selections there’s enough here to walk away feeling like good things actually do come in small packages.

Bang For Your Buck
Cicala del Giglio 2009, Bibi Graetz $48
This is 100% Asonica from one of Tuscany’s great winemakers, Bibi Graetz. The grapes are sourced from the Isola del Giglio, a small island of the southern coast of Tuscany. The grape is identical to Sicily’s Inzolia and shows the same fruit-forward character, with the acid of a cooler climate and is bound to make peace with a motley collection of palates.

Chianti Ruffina 2008, Selvapiana $42
Ruffina, which lies just outside the Chianti Classico region offers some great, under-appreciated value. This is classic Chianti that offers plenty of character for the price and is easily the most versatile sidekick with the food.

Etna Rosso 2009, Tenuta Terre Nere $44
Sicily’s Etna DOC is amidst a high renaissance and even the entry-level bottlings from established producers like Terre Nere are capable of expressing the volcanic rich soils that make the region so unique. The DOC's traditional blend of Nerello Mascalese and Nerello Cappuccio is at work in this lean, mineral-driven intro to Sicily’s most promising growing region.

Montefalco Rosso 2007, Milziade Antano $48
Umbria’s Montefalco region is another that’s been on the rise over the past decade. As a result, the entry-level wines labeled Montefalco Rosso— which are generally blends of Sangiovese (generally around 65 - 70%), Sangrantino, and a touch of Cabernet, Merlot or, in some cases, Colorino—have improved in quality dramatically. This is classic Montefalco Rosso with plenty of power, earth, and high-toned Sangiovese fruit.

Crowd Pleaser
Valpolicella Superiore 2007, Tenuta Sant’Antonio $46
Tenuta Sant’Antonio’s wines have just enough polish to make them a solid, inoffensive go to. The fruit is plenty lush as the wine is subjected to ripasso (wherein the fresh juice is passed through the concentrated skins and must of the dried grapes destined to be Amarone), so if you’re with a crowd that likes to keep it lighter, spring for the Barbera instead.

Off The Beaten Path
Grechetto Rosso 2008, Occhipinti $51
100% Grechetto Rosso sourced from volcanic soil around Lake Bolsena, in the often-taunted region of Lazio. Not the country’s strongest winemaking area, but one that has clearly got a thing or two up its sleeve. Floral, easy drinking stuff.

Dolcetto d’Alba 2009, Deforville $35
One of the great Dolcetto’s coming out of Piedmont from this small Belgian transplant family. Just enough dark Dolcetto fruit to please those looking to slug and just enough funk for the thinking drinker.

Break The Bank
Barolo 2006, Brovia $92
Though this is still just a pup, Brovia’s wines tend to show well with a short decant. This is classic, value-driven traditional Barolo from a trying vintage that is sure to breed some deals from experienced growers.

WTF?
There isn’t anything that’s really worth taunting in terms of selections. It’s a tight list, which is perhaps its greatest fault. In the interest of being short and sweet, it neglects a lot of Italy. A list with just a little more to choose from wouldn’t be out of place in conjunction with the food menu, which draws inspiration from all over the country.