The Box Delivers Surprises In Both NYC And London

Share All sharing options for: The Box Delivers Surprises In Both NYC And London

Just because the Box has been around for four years doesn't mean that it's no longer capable of surprising its customers with its unique brand of nightlife. For example, a tipster who was at the club this past weekend was surprised to wake up the next morning to discover that the club decided to automatically tack a tip onto his bill (something the club has been doing since day one), telling Eater that he bought three cocktails and the club added "a 20% tip to the number I see on the receipt. The bartender (just for pouring 3 disgusting overpriced drinks) gets $21.00 tip. Obviously, at 2 am, the place is dark, nobody tells me that the gratuity is included so what do I do? Is it even legal to add 20% to a check?"

This is a topic that has been fiercely debated in this space and others, and the rules on this are pretty clear, but what isn't clear is if the Box posts this policy on a menu. Do they even have drink menus?

Meanwhile at the Box in London. . . 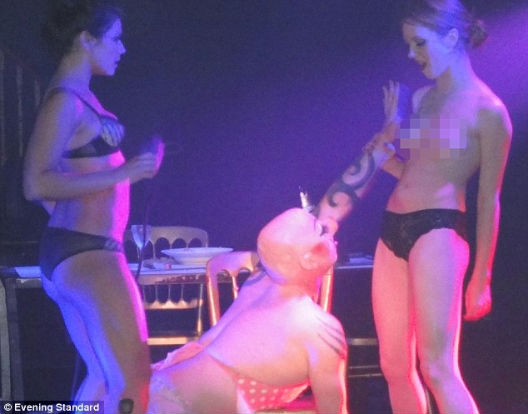 Image Courtesy of The Daily Standard

The Box's London outpost opened this past weekend during London's Fashion Week and the place is attracting a buzz similar to when it opened in New York four years ago. According to reports in the British press, Keira Knightly, socialites Jamie Hince and Jade Jagger and even Prince Harry and his current lady friend were partying there this weekend, as well as anyone willing to spend £1,000 or more for a table inside. That's $1600 to you.

And what did they see? None other than Raven O, the Box's original master of ceremonies, taking the stage at 1 AM, proclaiming to the audience, “do all the drugs you want. Do all the cocaine you can. Answer every fetish. Drugs are good!” The show consisted of a "first man simulated inhaling drugs off the stomach of a scantily-clad female while the next performance featured a naked man wearing a pig mask, being set alight by two women." This was all followed by a "another woman - known only as 'Laqueefa' - played the tune of a popular song using only her genitalia." How naughty! When the show ended at 3:30 AM, some VIP's were invited to a private area for a more intimate performance. If those walls could talk!

Hopefully the residents of Soho are still as happy with the Box now that it's open. Maybe the local community board could call the good folks at CB 3 to discuss strategy.
· Harry and the Den of Debauchery [Daily Mail]
· Several Years Later, The Box Finalizes London Expansion Plans [~ENY~]
· The Box Coverage [~ENY~]
· Nightlife Coverage [~ENY~]