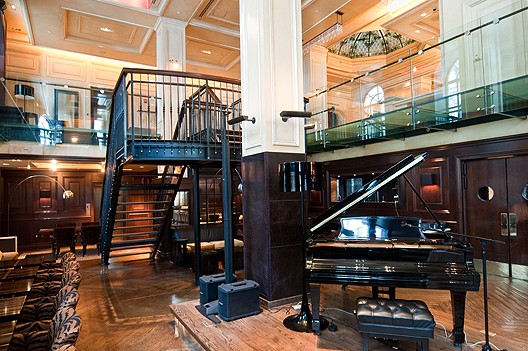 When a brasserie wine list is great, it’s nearly impossible to beat. Consider Balthazar, a restaurant whose list conjures memories of countless Paris experiences you’ve never had. It’s a tally of France’s many vinous achievements, but it never forgets the simple pleasures of cheap Muscadet and a dozen oysters. In other words, at the best brasseries the combination of simple food and classic wine can be transportive, allowing us to satisfy our deepest yearnings to be, well, French.

Millesime, the now lauded new brasserie in the Carlton Hotel, taps into this sort of nostalgia, but never quite manages to conjure any real romance. The wine list here is a collaboration between maître d’hôtel Samy Kebbab and Chef Laurent Manrique, and is stewarded by the wait staff. There is no sommelier or wine director, but Kebbab and Manrique have ample wine experience. Kebbab opened The Waverly Inn as Beverage Director and Chef Manrique, a native of Gascony, is a longtime wine lover and a partner in several wine projects in California and Spain. Despite their collective experience, though, the list seems to lack the sense of authenticity you’d expect these men to translate.

There’s a strong yearning at a brasserie for a wine list that completes the picture—one that gives pike quenelles and pot-au-feu real context. But while the food keeps its allegiance to France, the wine list takes the diplomatic route inviting Italy, Spain, and the United States to share its two pages. It feels a bit crowded as a result. The selections are well curated, though—just stay focused and be prepared to spend a bit more on the wine than you might on food; the wine list as a whole offers very little value.

Nothing is available for less than $55, including selections that fall in the single digits wholesale. Of course, it’s common to find the highest mark-ups on the cheapest wines, but here $55 pretty much means you’re paying more than you should. Come willing to spend around $75 and you’ll find a handful of wines that don’t challenge principle. On the high end, you’re looking at a fine selection of Burgundy in the high $100s, but the wines are young, so dial in a decant if you plan to go big.

At just around 200 selections, the list aims to be abbreviated and somewhat casual, but it ends up feeling short and a bit lackluster instead. Still, there are plenty of wines to build a meal on—just don’t be shy about cherry picking and bring your ability to climb a bit above budget.

Bang For Your Buck
Albariño 2009, Lagar de Cervera $59
The Rías Baixas region in the Southern half of Galicia (Northwestern corner), is home to the famed Albariño grape and its eponymous wines. Like the best expression of this variety, Lagar de Cervera’s riff shows great balance between concentration and aromatic intensity and the grape’s natural acidity.

Montagny 1er Cru “Les Bassetts” 2007, Domaine Laurent Cognard $70
Montagny is an appellation in the Cote Chalonnaise, in between the Maconnais and the Cote d'Or that is home to a sprinkling of value Burgundy. This is an excellent value from a small, traditional producer working here and in Mercurey. Powerful, but elegant chard that may be the best value in white wine under $100.

Rioja Reserva “Viña Ardanza” 2000, La Rioja Alta $68
Always a go to value from the region. A medium bodied wine with the classic Rioja goody bag full of Old World rusticity, earth, funk, and polished red fruit. This can be found on several wine lists around town and is surprisingly well priced here.

Crowd Pleaser
Côtes de Gascogne 2009, Domaine Duffour $55
Though this region is famous for its production of Armagnac, there are some excellent village wines, like this blend of old vine Colombard, Ugni-Blanc, and Gros Manseng, folded in. A bit overpriced on the list, but a fine option if you have a varied group and a budget to keep.

Off The Beaten Path
Cicala del Giglio “Ansonica” 2009, Testamatta $60
This is 100% Asonica from one of Tuscany’s great winemakers, Bibi Graetz. The grapes are sourced from the Isola del Giglio, a small island of the southern coast of Tuscany. The grape is identical to Sicily’s Inzolia and shows the same fruit-forward character, with the acid of a cooler climate and is bound to make peace with a motley collection of palates.

Break The Bank
Meursault “Clos du Cromin” 2004, Bitouzet-Prieur $145
One of the great, small producers putting out delicious wines from Volnay and Meursault. The ‘04s are drinking nicely now and this should show well out of the gate. Perhaps the best choice on the list under $150.

Columbia Valley Syrah “Lagniappe” 2007, Gramercy Cellars $ 102
Master Sommelier Greg Harrington’s Gramercy Cellars is one of the most interesting American projects of the last 5 years. He’s putting Washington State on the map in a new way with his Cote-Rotie style Syrah (i.e. he adds a dab of the white grape Viognier to his Syrah), Grenache, and Cabernet. This bottling hails from one of the coolest sites Harrington works with. High-toned and elegant with classic N. Rhone Syrah characteristics.

WTF?
Muscadet Sur Lie “Les Granges” 2009, Hautes Noelles $55
This is a killer bottle of Muscadet but wearing this sort of mark-up it looses its allure. It’s in the single digits wholesale and should be about $20 cheaper. If it was, it would fill that lonely place between $35-$55.