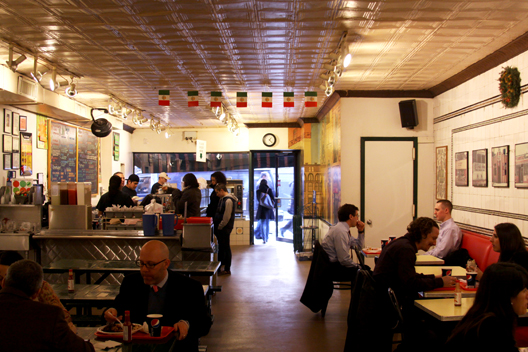 Our next recommendation comes from William Tigertt, an owner of several New York City businesses including two restaurants, Freemans and Peels.

"My love for Uncle Moe's pre-dates my restaurant career. When I first moved to the city from Detroit ten years ago, I lived up in Chelsea and would frequently lunch there. It's a family run, no-frills, self service San Francisco style burrito place. It's quick and clean and always a short line. The place has a mural of San Fran on the wall and photos of Mom & Pop burrito joints. I always get the Watsonville, which is a smaller version of the California burrito. I once tried the California and was sent into a deep food coma after consuming a burrito the size of my forearm. Don't get greedy with Uncle Moe's. If you can't hack the line at Shake Shack, take a four block detour and try one of the burritos. It's worth it."
—Gary Wong
· Uncle Moe's [Official Site]
· Previous Installments of Dining Confidential [~ENY~]