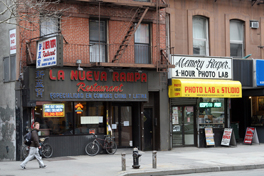 1) Chelsea: A reader of Jeremiah's Vanishing New York notes that La Nueva Rampa, a grungy but charming Chinese-Cuban diner that may be one of the last of a dying breed, has been closed for the last few weeks. Indeed, a Yelper mentions it may have closed as early as the New Year, and the phone line has been disconnected. Jeremish explains, "At La Nueva Rampa, the decor was simple and blunt. Chinese and Spanish foods were served and both languages were spoken. The food was plentiful, messy, and tasty. It was also very cheap. So we've lost another affordable Chelsea eatery." [JVNY]

4) Midtown: Midtown Lunch is sad to learn that Salt & Pepper, a Spanish/American/Indian restaurant on 33rd Street, is no more. [ML]