Share All sharing options for: The Meatball Shop's Michael Chernow and Daniel Holzman 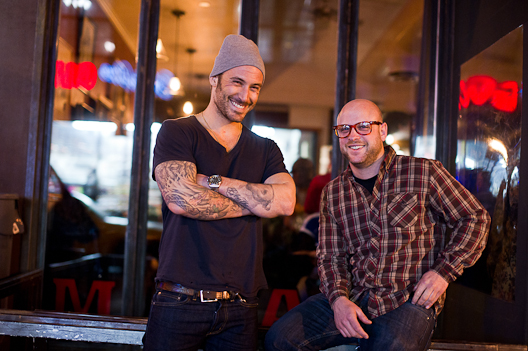 Michael Chernow and Daniel Holzman first worked together as delivery boys when they were 14. Even back then, they talked about opening a restaurant together, someday. Michael went on to pursue a career as a bartender and front of the house pro at some of New York's hottest restaurants, while Daniel moved out west and rose through the ranks of the San Francisco dining world. They kept in touch, and eventually reunited to open The Meatball Shop on the Lower East Side last February. The restaurant was a monster hit, almost from day one. Now, they dish out over 2,000 of their signature balls a day. The two have a book coming out in October, and a pair of new NYC locations slated to open later this year. We recently sat down with Michael and Daniel to chat about the first year of the restaurant and the road ahead.

Michael Chernow, owner: We had this idea that we were going to sell meatballs out of the side window of another restaurant — one of those DL New York spots. Get late night grub at the side window of this restaurant, and scratch your nose and rub your back and say "hallelujah" seven times and we'll give you a bowl of meatballs. Daniel Holzman, chef/owner: It was going to be a meatball speakeasy. MC: We found a restaurant, we were trying to make a deal, and the deal fell through. One day, Dan and I looked at each other at the exact same time and said...DH: That's not true. You were like "Why don't we just do a meatball shop, then." We were sitting at Whole Foods and I was about to move back to California. MC: We were actually at each other's throats. I knew that Dan wanted to do something a lot simpler, a lot easier and a lot more down-to-earth. He wanted to do, literally, a fast food restaurant. And I wasn't really into that, so The Meatball Shop came into fruition.

So, the original concept was something more akin to fast food? DH: Fast-casual. Some way of finding a menu that could be seasonal and match our values, using quality ingredients, but a place where you could eat three or five days a week, where you could take a date or just have a casual meal.

Did you guys come up with the recipes together? MC: We were pretty much in agreement about the taste of the balls. Actually, the recipes that we had the hardest time with were the sauces. DH: Basically every single time Mike was like "This sauce sucks," I would make the same one over and over and over again, and then finally one day he was like "Oh, this is delicious." And I was like "Oh, great! I changed the whole thing." MC: Ha, that's not true. That's a lie. I'm a sauce guy. DH: He's a connoisseur of fine tomato sauce.

How was the build? MC: Dan and I did the build out ourselves. It consisted of us being here at 8 O'clock in the morning, and Daniel didn't want to use any heat at all because he wanted to save for the rent. It would be freezing cold, we'd be bundled up and didn't want to hear a word out of anybody, and he'd be like "Hammer and nail there. Stick that there. That goes there," and he would proceed to use a broken floor board to ? DH: To build a restaurant that came in under budget and on schedule for the first time in New York City, for a ridiculously low cost of money, that worked out really well, and now we're really successful, so you can put your thank you note right here, douchebag.

So there were no delays? MC: We were right on schedule. We named the day.

How did you hire the staff? Were they people you'd worked with before? MC: I went to culinary school with Scott Jaffe, who's now the guy who runs the kitchen when Dan's not around. DH: Scott's the chef. He's the chef in the kitchen. MC: I went to culinary school with Scott and we'd really hit it off. And I said "Hey man, my plan is to open up a restaurant. And when I do that, I'm going to reach out to you, because I want to take you with me." And so we brought in Scotty, and he contributed to the build out here. And now, he's the chef of the restaurant, and he is the backbone of The Meatball Shop.

Did anything change after you opened? DH: One area that I was so stuck on was this idea that I wanted to have a counter service restaurant — I didn't want to have a waiter service restaurant. And we tried to do it that way after the first friends and family dinner. And Mike was like "This isn't working. This is not working." MC: I hired food runners, counter people and a bartender. I think we sat around a table and said "This isn't going to work, we need to make a change." So I literally rounded up all the counter people and the bartender and said "Hey guys, I love you all very much. Do me a favor and have faith in me that this is going to work, but you are no longer counter people, you are all servers."

What about the menu? Did any of that change once you opened? DH: When we first opened up, we originally had these tiny pads, and people were going to mark off what they wanted with a pen, and rip it off. And that was part of the counter service thing. And we've added a couple of things. Mike is like a genius when it comes to thinking up names for shit to put on the menu. Like "The Meatball Smash." And the funny thing about "The Meatball Smash" is that I've now seen four other places that have a "Meatball Smash" on the menu. It's like my favorite thing. The fact is that there are other meatball shops and other restaurants that now have "The Meatball Smash," "The Smasher," "The Smashed." It's fucking cool, man. It's fucking cool.

There are other meatball shops, besides this one? DH: Yeah, there are like four or five of them that have popped up. There's one in New York, two in Philly, one in Chicago, one in Kentucky or Illinois.

Have you checked them out? Are they really copycats? DH: Yeah, are you kidding me? MC: They literally came in and took a photograph of our menu. DH: I'm interested and excited to see just how strong the concept is. I just want everybody to know that we did it first. If everybody wants to do it also, there's 3,000 miles between here and California and there are plenty of towns to put a meatball shop in. All the better, we wish everybody the best. It would just be fun to go down in history for starting something new.

When did you guys first start talking about expansion? MC: The minute we opened the doors, people were sending us e-mails saying "I want to have one in my town, in Westchester." That kind of got the engines going, but we were at that point in the game where we were so overwhelmed with what we got going here. So, we couldn't focus on that. DH: You don't know how many letters I've gotten from locals that are like "Hey, I love you're restaurant. I think it's great. But we're pissed off because we can't eat there because the wait's too long." The whole point of the restaurant is somewhere where you could just jump down from your apartment and eat. It's supposed to be fast-casual, not wait two hours then it's fast-casual.

What about expansion elsewhere, either in New York, or outside of the city? DH: We have some sort of dream about having meatball shops. We think it's fun. But we also have a realistic attitude of "We have one restaurant." It's really, really, extremely tough to keep one restaurant running really well. MC: I look at it like this: Five Guys burgers and fries? They have a bunch of stores, but they're five guys. We're two guys. And three stores is good for us right now.

Does it feel like it's been a year? DH: I've aged ten years, and it's been one year. MC: I think this has been, by far, the best year of my life. And I think this business has taught me so much about not only about the restaurant industry, but myself and my relationship with my partner.
· All Meatball Shop Coverage [~ENY~]
· All Previous Editions of One Year In [~ENY~]