New York Fashion Week is coming to an end, and while the clothes are more important to most, it is also a very important week for nightlife venues who's self worth is based on how many parties they host. But there is only so much room at the top of the heap, so while some go up, others unfortunately went down. 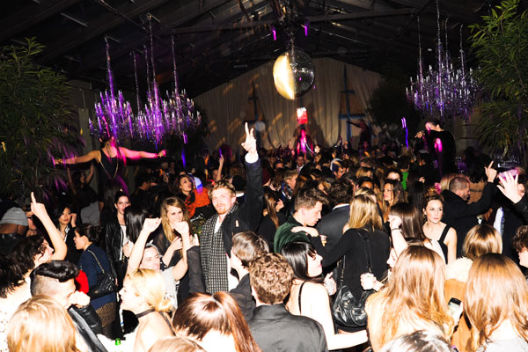 MISTER H— Armin Amiri's return to New York nightlife went off without a hitch, as his new lounge at the Mondrian Soho had some big events (VMan), tons of coverage, and the blessing of Kanye West. It also had the benefit of being the only brand new game in town this week, but credit is deserved for delivering the goods. Let's see if Armin has what it takes to make it last, something that is never easy to do.

THE BOOM BOOM ROOM/LE BAIN— Andre Balazs' penthouse party palaces had another successful week hosting the premiere Fashion Week parties (Purple) and bringing the Le Baron crew to Le Bain while it's Chinatown home is still being worked on. In fact, it's safe to say that the these two places are the Official Capital Of NYFW nightlife from here on out.

JIMMY AT THE JAMES— A small hotel rooftop with a giant outdoor space and pool far away from the Lincoln Center tents and the MePa wouldn't seem to be a natural place for Fashion Week events in February, but Jimmy was well received with some choice events (Refinery29, Phillip Lim). What's more important is that Jimmy is building momentum as it prepares for its first summer of operation when its pool area will be a choice destination.

DON HILL'S— Nur Khan and Paul Sevigny's downtown rock club went all out for Fashion Week last year, hosting shows by Iggy Pop, Hole, Crystal Castles and the Yeah Yeah Yeahs all in one week. This year. Nada. Apparently, this was Khan's plan all along, but things have been very quiet from the depths of Soho these past few months, so having some kind of presence during NYFW would have been a bit reassuring for Don Hill's going forward.

WESTWAY/LE BARON— These two places were supposed to be open for Fashion Week and missed the mark. We don't feel too bad for putting them on the Loser's List though, since they are most likely to kill it when they finally do open up this spring. But it is always nice to get the new girl in class attention that a Fashion Week premiere brings.

LAVO— Just like Don Hill's, Lavo was the new game in town last year during Fashion Week. This year, the place has settled in as the only nightclub in midtown, which certainly isn't a bad thing. But even with its proximity to the Lincoln Center tents, the club wasn't able to pull in as many big events for the week as one would expect. Don't feel too bad though, as the club is still finding a way to bring in the sorts of parties that it was counting on.
· Nightlife Coverage [~ENY~]