Joseph Leonard Rises from the Ashes, Fedora Leans On France

Share All sharing options for: Joseph Leonard Rises from the Ashes, Fedora Leans On France 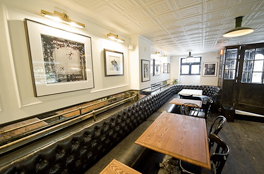 Joseph Leonard has reopened after October’s devastating fire as a far better place to drink. The fire, which was largely isolated in the basement, actually made more room for wine after renovations—the kind of bonus one doesn’t consider when their restaurant is ablaze.

The new list is now under the direction of Joseph Leonard and Fedora GM and former Beverage Director at Perilla, John McNulty. He’s capitalized on the new-found square footage and expanded the list, inserting a stronger connection to value-driven American wines and a new focus on Riesling and Grüner Veltiner. It’s nearly twice the size of the previous list and far more in step with the food menu.

But it isn’t about to rewrite the model for NYC’s hip, mid-level wine lists. It is more-or-less a well-chosen smattering of wines from the Kermit Lynch, Rosenthal, and Michael Skurnik portfolios—three importers with sophisticated salespeople who have, in many ways, made it possible to put together a great mid-level wine list with ease. The only drawback is that many of the city's featherweight lists end up looking quite similar. Joseph Leonard has added itself to this fashionable heap, but it hardly feels like a fault when it comes time to choose wine; the importers that JL leans on are three of the city’s best and the mark-ups are largely below standard.

At Fedora, you’ll find a list that pushes its price ceiling a bit higher, offering a handful of wines over $100 that are worth splurging on, especially the well-priced sections devoted to Old World bastions Emidio Pepe and Lopez de Heredia. On the low end you’ll want to trip into the Southern France where the list’s reliance on Kermit Lynch makes it safe to close your eyes and point to anything that has “Rhône” in the name. When it comes to whites, fix your gaze on France; while Germany, Austria, and Italy have a few lustables, France is home to a slew of no-brainers in every price point.

Neither of these lists are breaking any new ground, but they’re both value-driven, with below standard mark-ups that hone in one some of the best wines available in their respective price points. In that sense, there’s really no point in arguing with fashion.

Bang For Your Buck
Viognier 2009, Chateau Massiac $41
Hailing from the heart of Minervois, this small family owned farm puts out excellent, fruit-forward Viognier. All of the usual aromatics and viscosity, but with brisk acidity in place of heat.

Riesling “Steinhaus” 2002, Hiedler $55
One of the preeminent Austrian Riesling bottlings from Hiedler, here with some wisdom, at a terrific price.

Sancerre “Chavignol” 2009, Bailly-Reverdy $65
Overshadowed by the Loire’s more fashionable wines, Sauvignon Blanc from its spiritual home—Sancerre—often gets shoved under the rug, but it is one of the great, under-appreciated wines. Here from Chavignol, the sub-appellation responsible for the finest expressions of the grape, a very classic rendition.

Morgon 2009, Jean Foillard $60
Foillard is the master when it comes to Morgon and this bottling is often the single greatest argument for the brilliance of Beaujolais. Here from the highly sought after ’09 vintage at a price that is far less opportunistic than most looking to capitalize on the hype.

Châteauneuf du Pape 1994, Clos du Mont Olivet $96
A rare opportunity to sneak into some classic back vintage Châteauneuf without mortgaging your firstborn.

Off The Beaten Path
Jacquere “Abymes” 2009, Roger Labbe Vin de Savoie $43
Savoie, a little tenderloin crouched at the foot of the Alps, is responsible for some of the most delicate, aromatic whites in France. This lean 100% Jacquere (the regions most planted varietal) is the embodiment of alpine purity.

Under $40
Mencia 2009, Guimaro $39
Ribeira Sacra is one of the coolest up and coming regions in Spain. Marked by steeply terraced vineyards (some carved into the hillsides by the Romans 2,000 years ago), these wines are rustic, obscure, and made in teensy quantities.

Break The Bank
Côte Rôtie 2007, Philipe Faury $114
This is definitely a bit young and challenging to drink on its own, but with a short decant and some animal it’s a superb introduction to the many gifts of Northern Rhône Syrah. Bloody, meaty dark fruit and plenty of structure. Will show well with a short decant.

WTF?
There’s not much to nitpick in terms of selection. There’s a lot of value and variety under $75 and the high end is priced appropriately. The only gripes might be that most of the wines come from a single importer, albeit a good one, and the spelling errors/incomplete wine names.

Bang For Your Buck
“Gyotaku” 2009, Mittnacht $40
Mittnacht is an excellent under-the-radar estate in Alsace that is quietly puting out some of the great values from the region. All biodynamic and organic with minimal manipulation in the cellar. “Gyotaku” is a traditional Alsace white blend that’s the result of a collaboration between Mittnacht’s winemaker and a Japanese chef, fashioned exclusively for raw fish.

Riesling “Steinterrassen” 2008, Stadt Krems $63
Dusty winery with 550 years of history behind it, owned by the city of Krems. As of late the wine production has been exceptional. Classic Austrian Riesling - plenty of fruit, a touch of residual sugar, and ample acidity.

Côte Roannaise “L’Incorruptible” 2009, Robert Serol $44
The Côte Roannaise is a tiny appellation in the hills northwest of Lyon. Gamay is the main variety here and the wines tend to mimic Beaujolais on the lean side. Robert Serol is a small, family-owned estate in the heart of this somewhat obscure appellation. Rustic, fruit-forward and versatile.

Vacqueyras 2007, Sang des Cailloux $70
The tiny region tucked near the more famous regions of Châteauneuf du Pape and Gigondas, Vacqueyras is home to some of he great values in Southern Rhône wine. Sang des Cailloux (meaning “blood of stones”) is one of the area’s star producers. Here a blend of Syrah, Grenache, Cinsault, and Mourvèdre that’s all earth and dark broody fruit.

Off The Beaten Path
Madiran “Cuvee Erigone” 2007, Domaine Laffont $55
Madiran is the oft forgotten region south of Bordeaux famous for the sometimes overpowering and rebellious Tannat (a variety that is also the official grape of Uruguay). With a deft hand the grape can turn out wines that rival the region’s northern neighbors. The Cuvee Erigone blends in a little Cab franc to softening Tannat’s tannic blow and give the wine a little more aromatic intrigue. Needs rich food.

Crowd Pleaser
Dolcetto 2009, DeForville $45
One of the great Dolcetto’s coming out of Piedmont from this small Belgian transplant family. Just enough dark Dolcetto fruit to please those looking to slug and just enough funk for the thinking drinker.

Under $40
Anjou Blanc 2009, Château Soucherie $38
Château Soucherie is one of the great value estates working with Chenin Blanc. This is their entry level bottling from Anjou. Simple, citrusy, and brisk.

Break The Bank
Champagne “Special Club Millesimie” 2000, Gaston Chiquet $130
Champagne’s Special Club is a group of 26 Grower-Producers who are all dedicated to the expression of terroir in Champagne. The Special Club bottling, which comes in a very special bottle, is considered to be the best offering from each grower. Chiquet’s wines are rich, but chiseled. The ’00 is drinking well now.

WTF?
Montevetrano IGT 2005, S. Imparato $175
Though this is one of Campania’s great cult wines, it’s one that takes quite a while to come out of its shell. This is still quite young and closed and will likely not give much in the time it takes to get through dinner. Not worth the coin in this shy state.