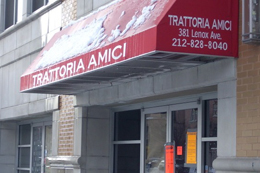 1) Hell's Kitchen: The team from 9th Ave. Latin eatery Agua Dulce write in with the news that they are closing on February 20 to work on a new concept in the space that's slated to open "very soon." [ShutterWire]

2) Upper West Side: Niko's, a Greek diner specializing in seafood, has a sign on the door that says that they "sold" their lease, and the lights are off. A call confirms that they are closed. The restaurant is a sister establishment to Big Nick's and Pizza Joint in the neighborhood. [ShutterWire]

4) Upper West Side: A tipster writes in with the news that Polpette, an Italian restaurant owned by the Ark Group, is no more. No one's picking up the phones, she's gone. [ShutterWire]