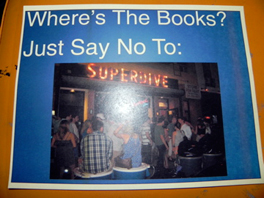 Last night, several members of Community Board 3 along with 18 applicants and a handful of residents of the Lower East Side and East Village spent their Valentine's Day at the SLA & DCA Licensing Committee hearing impassioned speeches from representatives of bars and restaurants seeking liquor licenses, karaoke machines and sidewalk cafes. Here are the highlights of what went down at this evening affair:

1) Superdive was on the docket, even though they didn't file for renewal and don't need to for a couple more months. A rep was not present, but since CB3 put them on there, neighbors showed up to protest the renewal at the closed 200 Avenue A location. 15 people held up signs (see above) and around 8 people spoke out against them. There was a Motion to Deny, and, not surprisingly, all were in favor. Basically half the room left after Superdive's portion was over.

2) Momofuku Milk Bar had an easier time of it. Their reps are seeking a full liquor license for a new location at 251 E. 13th Street (across the street from their current 207 2nd Avenue). When the committee questioned the need for a bakery to have a full liquor license representatives eloquently spoke out about their need being mainly for baking purposes, and for a boozy milkshake. They would simply serve two types of beer for patrons who did not wish to have dessert. There was a Motion to Deny unless the following stipulations were met: Momofuku Milk Bar will operate primarily as a bakery cafe with a fixed facade, serving no more than two beers on the menu and alcohol will only be served in desserts. The majority was in favor. Be on the lookout.

3) The Beagle was present, seeking the old Orologio space on 162 Avenue A (the owner of Orologio was there in support). There was a lot of back and forth on this one. The representative mentioned the price points being reasonable, and community members responded that they saw a sample menu, where entrees were between $26-31. The representative said that was an old menu, and of the 31 items on the menu, 20 are $12 or under. The community members complained about pigs head, foie gras and animal rights. A committee member then gave a dramatic speech about being a vegetarian, not caring what others eat and that this is an application for a transfer, and why shouldn't they support local business? She gave a Motion to Approve with some stipulations; including that they not apply for a sidewalk cafe until 1 year in and that they close Sunday-Wednesday at 1am and Thursday-Saturday at 2am. All were in favor.

4) Snack Dragon the taco joint, was denied their attempts at a wine and beer liquor license for their location on 164 Orchard Street. They had no opposition from community members.

5) Another restaurant which was denied was Snack Dragon's neighbor, Goodfellas Brick Oven Pizza, planning to open on 144 Orchard Street. Goodfellas is already a successful pizzeria in Staten Island, where they are licensed, yet the Community Board was in favor of the Motion to Deny mainly because the new license would be in a resolution area. The Staten Island location also recently won first place at the Pizza Expo in Las Vegas.

6) Heartbreak Cafe, a newcomer at 29 East 2nd Street, attended the meeting in hopes of adding a sidewalk cafe in order to increase business. One member of the Community Board was furious that they would come back and ask for a sidewalk cafe so soon after they opened, when it had been a stipulation in the past that they would not seek one. There was also some confusion as to how long the restaurant has been open. Representatives of the restaurant said five months, while online reports had it at two and a half months, and this seemed to infuriate the committee member further. Eventually, it was approved with a change of stipulations that they would put eight tables and 32 seats on the 2nd Avenue side only and they would close at 11 PM.

7) A representative from Marry the Ketchup waited his four hours to speak. Marry the Ketchup is a newcomer which will feature seafood and oysters in the old Permanent Brunch/Steak Shoppe space on 95 1st Avenue. Because of the Stop Work Orders on the door for Steak Shoppe, Marry the Ketchup has been unable to use the space for 6 weeks. There was a Motion to Deny with stipulations that they would operate as a fresh seafood restaurant with the hours of 12 PM - 12 AM Monday-Wednesday, 11 AM - 2 AM Thursday-Sunday and stop serving food an hour before closing, their folding doors must close at 10 and they can play ambient background music only. All were in favor.

8) Additionally, a new karaoke machine is coming to 40 Mulberry Restaurant Inc and Family Recipe, a new Japanese restaurant coming to 231 Eldridge Street, was given approval by the committee for wine and beer.
—Jackie Goldstein
· All Community Board Coverage [~ENY~]