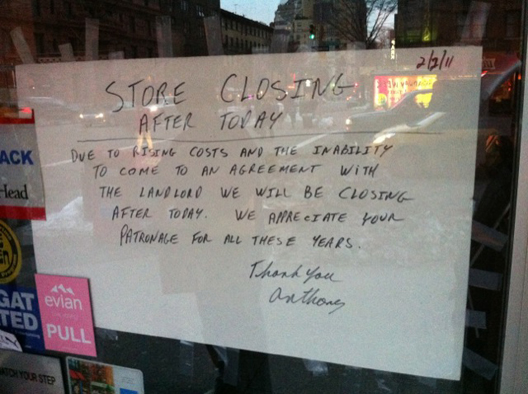 2) Boerum Hill: A tipster writes, "Stir It Up on Atlantic Avenue near 3rd Avenue dons a sign in the window that reads 'Stir It Up is Closed Until Further Notice.'" [ShutterWire]

3) East Village: ApizzA on Avenue A between 12th and 13th Streets shuttered at the beginning of the month, EV Grieve reports. [EV Grieve]

4) Upper East Side: We learned from Grub Street that 22-year-old biker bar American Trash has shuttered. However, Murph Guide has posted an update and reports that American Trash will remain open another few days and have their final night this Saturday, 2/12. [GS, Murph Guide]

6) Upper West Side: Eater received a tip that Zeytin Bar & Restaurant on 85th and Columbus Avenue has closed. The phone number is no longer in service. [ShutterWire]