CB2 Weighs in on Rose Restaurant, Jimmy Chin's, and More

Share All sharing options for: CB2 Weighs in on Rose Restaurant, Jimmy Chin's, and More 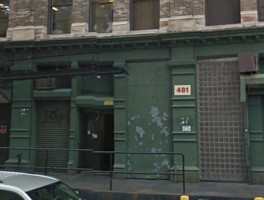 Due to a lengthy list of applicants for February, Community Board 2 met for a second time last night to discuss an agenda that, yet again, was longer on layovers, withdrawals, and no-shows than applicants present. Among those not there was Nello for a second time, drawing ire from members of the community there to oppose it. So angry was one person that he directed it at the committee, pointing out that "it's the second time I've been here and I don't think that's the proper way to do business." When chastised by the committee, he struck back, shouting "you don't want to hear what I have to say?" Misplaced fury aside, it wasn't lost on the committee that there have been a large amount of last minute layovers of late. Ultimately, only five applicants were up for a vote, from an agenda that originally had nearly 30.

1) First up for the night was Rose Restaurant, a French restaurant at 337 West Broadway that owner David Kay said would be based around rosé wine, including food made with it. It's actually a second location for the restaurant with the first to open next month in Los Angeles. Originally hoping to be open nightly until 2 AM, he agreed to a 12:30 AM closing Sunday through Wednesdays. Throw in a promise to close the French doors at 8 PM every night and it was approved unanimously by the committee.

2) Also on the docket was Jimmy Chin's, the proposed dim sum restaurant/tavern at 481 Washington St. which was yet again met by vocal opposition. Regarding the issue of noise and sound control brought up at the last meeting, co-owner Stephen Breskin's pointed out that as an owner of the building which also includes apartments above the restaurant, he had a vested interest in making sure there would be no sound issues. As for the late hours creating the impression that it would be a club-like establishment, all he could say was "I don't go to clubs, I've never run a club, I don't know how to run a club." In making his point, he also managed to offend his prospective neighbors by saying that the street was desolate and "across the street from a garbage depot."

Breskin was already on the defensive from the committee's inquiries and it didn't get any better once it was opened to comments from the community. The first speaker and Breskin's lawyer argued over what constituted a public interest with the speaker asserting that affordable prices and quality food weren't enough to serve the public interest. The neighbor from the adjacent building was back to refute Breskin's points, sarcastically thanking him for "the repeated disparaging comments about our community" and remarking that "based on the hours, this is a business designed to push the volume of alcohol." Another speaker wanted to address the intent of the 500 foot rule and that there was already an over-saturation of bars and restaurants in the neighborhood. Committee co-chair Raymond Lee asked, based on that sentiment, if the speaker would just object to any application and the speaker responded "we'd have no problem if this were a restaurant but it's not, it's a club." A former CB2 board member spoke next and pointedly asked "we're supposed to expect that they'll be serving dim sum until 4 AM? Are we that gullible?" After taking the beating, Breskin agreed to change the hours to a 2 AM closing every night but that didn't assuage the committee's concerns, leading to a unanimous vote to deny.

3) There was also a renewal application for Emerald Pub at 308 Spring St. Co-chair Richard Stewart quickly warned the gathered nearby residents that they would have a short rope when speaking and that it would not turn into "a lynch mob situation." He shouldn't really have worried too much about that since the speakers cited that the bar was, for the most part, a good neighbor. One speaker even said "it's not them, it's the preponderance of all the new businesses." What the neighbors wanted was for there to be a better effort to make sure the garbage and cigarette butts were cleared off the sidewalk and that there be signs asking patrons to be respectful of nearby residents. An easy vote for renewal.

4) The final applicant of the night was Arsenoi, a Greek restaurant that will serve chicken dishes, hamburgers, and other assorted light fare at 404 Sixth Ave. This was their second time appearing before the committee and they didn't really do much to allay the previous concerns about the multiple floors and the late hours (open until 4 AM). The owners compromised on the hours, with a 3 AM closing Thursday through Saturday and 2 AM the rest of the week. That wasn't enough for the committee and they voted unanimously to deny.
—Gary Wong