Share All sharing options for: Mile End's Noah Bernamoff After One Year 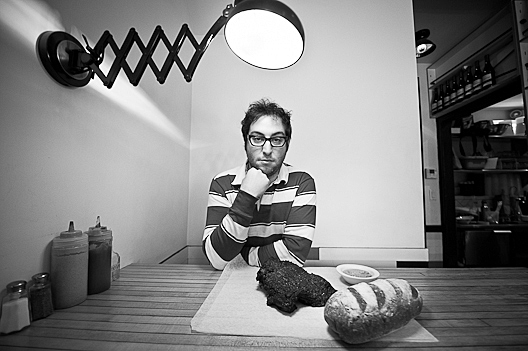 A year ago, Noah Bernamoff opened Mile End, a small restaurant in Boerum Hill inspired by the classic Jewish delicatessens of his native Montreal. He'd never worked in a kitchen before, but he had perfected a recipe for smoked meat. When the doors opened, the sandwiches made with his signature version of pastrami were an instant hit. It was hard to keep up with the demand for the dish, but Noah also wanted to grow the project into something more than just a sandwich shop. His vision was for a modern Brooklyn eatery that offered a taste of the meals he'd enjoyed around his family's dinner table growing up. He'd get there, but it would take months of work and a few chance encounters to make it happen. We recently sat down with Noah to chat about the first year of Mile End, and the road ahead.

Noah Bernamoff, owner Mile End: I've always had a love for food, but never as a professional pursuit. It was a typical Jewish thing — you've got to be a professional, you have to have as many letters after your name as you can. That was the path I was begrudgingly going down. But I made smoked meat at home, in my fridge and on my roof, and it was really good. I said to myself, "You know what? Worst case scenario, I'm going to open this restaurant and all we're going to serve is smoked meat." And that was, in some ways, enough to get me to open it.

Did you have any specific restaurant influences? Absolutely. Schwartz's in Montreal is my all-time favorite restaurant, period. It's the emblematic deli of my childhood. And I find that actually everyone's favorite deli is the deli of their childhood. So, when I played around with smoked meat, I was trying to recreate that deli sandwich I'd had in Montreal.

What about New York restaurant influences? When Buttermilk Channel opened, I loved it. I also remember the first time we went to Frankies 457, right after we'd moved to the neighborhood. It is the best. In many ways, it's almost perfect. I thought that they were really cooking and really understanding what it means to be an Italian-American, and to have these old-country traditions mixed up with other cultures.

How was the build? I had no idea what I was doing. This was a garage. It had 40 amps of power, there was no gas, there was no facade — it was just a garage door in the front. But I kind of relished the opportunity to build it from the ground up. I had general contracted most of the work myself We went from trying to open in October, to trying to open in December, to eventually opening at the end of January.

How was the opening? When we opened, we were such a rag tag team. All my friends were working, and none of them were cooks. I remember our first brunch service, five days after we opened — it was one of the worst days of my life. We fucked up so many orders. We were so slow, and it was so evident to me that if I was on the other side of the counter, I would have been so disappointed.

When did you start running out of meat? Day one.

How did you deal with that immediate demand? We didn't. I had no idea know what to do. And people were like "Order more! What the fuck is wrong with you? Just get more!" But, we couldn't just get more. Our fridge downstairs is four feet by six feet, and it's filled to the tilt. You open the door and stuff is falling on you. We couldn't cure more meat, we couldn't smoke more meat. Every single day, we were closing at 4 PM, prepping till midnight, we were smoking overnight, and I was coming in at 7 AM every morning to pull the meat out, prep for breakfast and open at 8 AM. I was killing myself. All my friends stopped liking me because they're not restaurant people. I wasn't sleeping, I wasn't eating, and I really couldn't do anything better than what I was doing.

Did you hire more staff? Yeah. We had a bunch of interviews, and we had this guy come in, Jay Chan, he used to work at Mas (Farmhouse). He was in three days in a row for lunch one week, because he loved the sandwich. One day, he asked if we were hiring and I told him to bring in his resume. I saw he'd been to culinary school and that he'd staged at a couple of restaurants in Montreal. So, he knew smoked meat, he knew poutine, and actually had this Italian restaurant experience, so I was like "You're hired."

When did things stabilize? They stabilized when we were able to make enough money to open our warehouse to make the smoked meat. That was in May. After the second week in business, I knew that we had to do something, but it just took that much time to get the money, find a space we could afford, and get the contractors. The warehouse was another blank slate. So, May came and we were finally able to not run out of meat. Towards the end of June, we opened up for dinner.

What was the original concept for dinner? We were serving lunch at dinner, and in this neighborhood, lunch is lunch, and dinner is something that comes out on a plate, not between two pieces of bread. But I wanted to make sure that if we were putting out dinner dishes, they'd be culturally relevant to what we're doing. And then, October came, and Jay, who had been with us for a long time, said he wasn't feeling it anymore. Literally the day after we discussed how we were going to part ways, I got a call from Aaron Israel, who lives right down the block. He was the sous chef at Torrisi Italian Specialties since before they opened their doors. He would come here every afternoon on his days off. And he called me and said that he wasn't feeling the vibe at Torrisi and that there was nowhere for him to go there, and he asked what was going on at Mile End. So, we had a beer, we hit it off, and now we have a real dinner menu.

How did dinner change with Aaron? Well, it seems to me like people want something that's down home, real food, real flavor, no tricks on the plate. And I feel like there's this real cannon of Jewish food that you don't get at a deli, that's typically reserved for celebration dinners with your parents or grandparents at home. It was with Aaron's motivation and willingness to jump in and grab the bull by the horns that it became what it is now. But we're constantly working on it, updating and adjusting the menus and running specials.

So, how has dinner been received? It's been almost unanimously positive. The neighborhood people love that there's another dinner option. People are maybe not as willing to make a long trip for a sandwich, but if you make a night out of something, and have some nice food, that's different.

What's next for you guys? For me, right now we're at a kind of exciting crossroads. In this city, if you're not growing, you're dying. We're at a stage now where we're trying to figure out what the next best thing is.

Would you want to open another Mile End? I think it would be tough to do dinner in multiple locations, because of how personal it is, and dinner would not be nearly as good if it were not for Aaron. But, could I see selling smoked meat sandwiches at other spots? For sure.

Does it feel like it's been a year? It feels like it's been a week. Time has gone so quickly. I'm amazed that I'm still alive. But also, I can't even remember last January — it's such a blur.
· All Mile End Coverage [~ENY~]
· All Previous Editions of One Year In [~ENY~]