Share All sharing options for: Friends of Eater Offer Headline Predictions for 2012

As is the tradition at Eater, our closeout of the year is a survey of friends, industry types, bloggers, and readers. We've already covered Best Standbys, Top Newcomers, Best Restohood, 2011 in One Word, Biggest Dining Surprises of the year, Single Best Meals, and Restaurant Breakups. Now, finally, Headline Predictions for 2012. Readers, please add your thoughts to the comments. 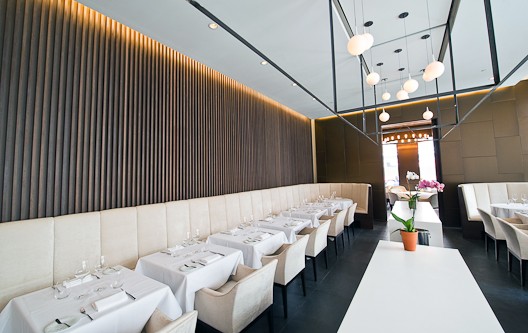 Jay Cheshes, restaurant critic, TONY: David Chang, Ken Friedman, Graydon Carter and Daniel Boulud join forces to open the mother of all casual, clubby, pan-Asian, French restaurants (or they continue to swallow up more of the city, at least).

Ben Leventhal: Bobby Flay might announce new plans for Mesa Grill next year, so that's something to watch for. Other things I'm watching for: Will the Torissi Boys gets their Best New Chef nod or did F&W miss the moment? Where does Tien Ho land? Can Stulman go four-for-four? How quickly can Michael White open 10 pizzerias? Who's going to create the next Lucky Peach?

Danyelle Freeman, Restaurant Girl: It’s going to be the year of the sandwich. Anything goes as long as it’s sandwiched between some form of carbohydrate. Corn arepas, Chinese steamed buns, dosas layered with the world’s foods. Think mix & match cuisines.

Ryan Sutton, restaurant critic, Bloomberg: 1) Jung Sik & Romera cut their prices again. 2) The El Bulli service at Next by Grant Achatz is harder to get into than El Bulli was. 3) Big box restaurants like Catch and Kibo admit they had their brains wiped Men In Black-style
because no one in their right mind would open up such behemoths in a post-recession New York, no matter how good the food might be. 4) Lady Gaga serenades Ryan Sutton at her dad's new restaurant. Then Gaga, Sutton and the Gaga family go to Bemelmans for cocktails and then yachting on Long Island, then a private jet to the Bahamas. . . wait,
what?

Travis Bass, promoter, Red Egg: There is going to be a shift towards a more real cuisine that tastes great without celebrity chefs and overdesigned decor!

Josh Stein, senior editor, Departures Ken Friedman to open food court named The Zoo with off shoots of The Monkey Bar, The Spotted Pig, The John Dory. There will be a Danny Meyer petting zoo with Maialino. Also, Sandwiches Go Out of Style.