Share All sharing options for: Edi & the Wolf's Eduard Frauneder and Wolfgang Ban 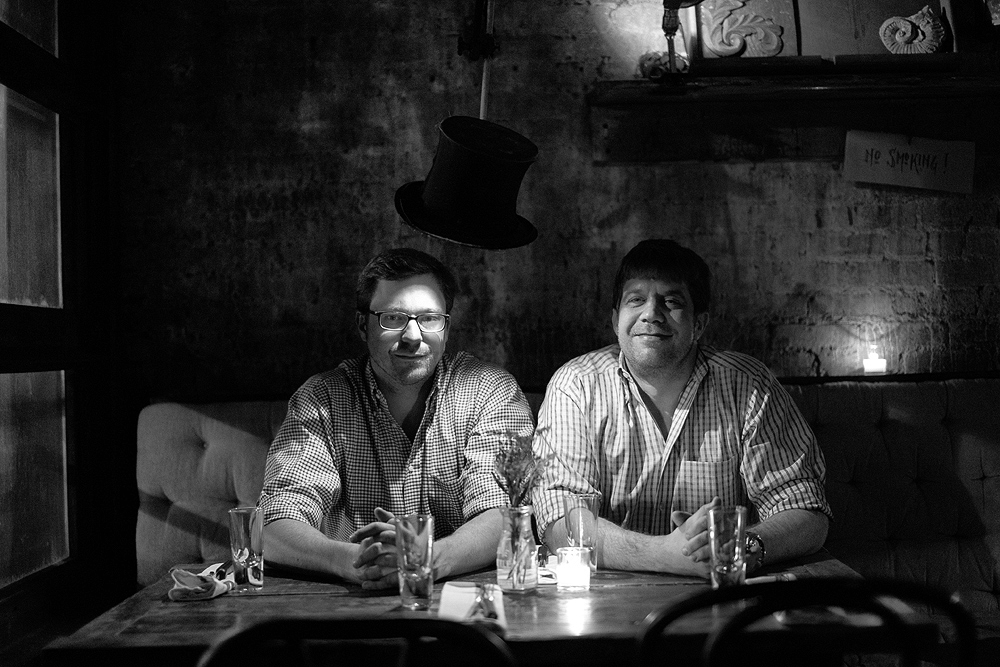 Eduard Frauneder and Wolfgang Ban are ending 2011 on a high note: their year-old Austrian restaurant Edi & the Wolf is a bona fide hit, and their first project together, Seäsonal, just got a glowing two-star review in the New York Times. When we spoke with the chef/restaurateur duo at the beginning of the month, they had no idea that their Midtown restaurant was going to get reviewed — it's just one of many surprises they've encountered recently. Here's the story of the first year Edi & the Wolf, as told by Frauneder and Ban:

How did this project come together? Eduard Frauneder, chef and restaurateur: I live around the corner, and that's how I found the space. I basically said, "Listen guys, let's do something a bit different from Seäsonal. Something a bit more rustic, downtown, younger, and more playful."

What was here before? Wolfgang Ban, chef and restaurateur: It was a pizza place, but it was only open for like four months. They didn't have a liquor license or a bar. Obviously, things didn't work out — I think they were a little undercapitalized. So, the landlord was looking for someone who had a little more experience who could take over and do something long-term.

How was the build? EF: It was very quick — ten weeks. We had to gut everything. The only thing that was left was the wall and the floor.

What were you thinking about in terms of design? EF: We picked the benches, tables, and chairs. We built the ceiling and we built the bar. For lighting, we got sconces from the 1920s and factory lights from 1918. Some people call it hyper-decorative, but I think that it's homey and rustic and warm. It transports you, as well — it takes you somewhere else. That's a big part of the dining experience.

Did you have any delays? WB: Hardly any delays. The biggest problem is always the liquor license, and since we applied for wine and beer in the first place, that was much faster than waiting for a full liquor license. We were just approved for a liquor license two weeks ago. EF: Yeah, they saw that we are a legitimate restaurant and that the owners are here themselves. When you come in here, you only see tables — you don't see an endless bar, or two of them. I think we proved to be a legit restaurant and there are no complaints with the neighbors, nothing whatsoever. Also, we do work with the community. We help the homeless shelter on Avenue B and the tenement building on the Lower East Side. We do lots of things on the side, and that shows that you're a good neighbor. That's the ultimate thing that you have to prove. Are you good neighbor? Are you worth the trust that they give to you by giving you a license? Be good to the neighborhood, and the neighborhood will treat you well.

How was the opening? Did people check it out? WB: It was pretty fast. I was surprised. People walked by and saw the interior and the design, and they were very curious in the first place. Once we opened the doors, it filled pretty quickly.

Did you have to make any changes to the menu after opening? WB: I think the menu pretty much worked out. Of course, we do little changes here and there to bring seasonal aspects in, but I think the core menu has stayed the same since we opened. Obviously the classics are what people really want: the pork belly, the wiener schnitzel, spaetzle, and the ribs. EF: It's a very meat-centric concept, and I think people have this pre-conceived idea that Austrian food is meat and potatoes. The quintessential Austrian dish is wiener schnitzel, which is meat and potatoes, but it can also be executed very elegantly so that you feel good after eating it. I think people like this aspect of European cooking, because this is something that they haven't had before. Austrian friends bring their American counterparts, and then they come back on their own.

This is the second restaurant in a row where you didn't get a full review in the New York Times after opening. How do you feel about that? EF: We hope one day it will happen. WB: Otherwise, we'll have to open a new place and get it on the third time. EF: You know, the New York Times is so unpredictable. There are only 52 reviews a year, and everyone wants it. Sometimes there's some very quiet place in Brooklyn or some very quiet place in Queens that gets reviewed, and there's over 10,000 restaurants in New York. It either happens or it doesn't happen, but you just have to go business as usual. Do we want a review? Of course — we would love a double review. Seäsonal and Edi & the Wolf. That would be amazing, and we always keep our fingers crossed.

Did brunch take off immediately? EF: No, that took a little while. It took three months, but now it's a killer. WB: I think that the full liquor license will be good for that, because people need their bloody Marys in the morning to pick themselves up. EF: But it's a good deal. It's $14 all-in, and you can get fresh orange juice, espresso, homemade bread, butter, jam, pan au chocolat, challah, and then a full meal on top of that. People stay here from brunch through dinner. They come at 2 PM, they eat, then they just booze away, and then at 5 PM they have dinner.

Did things slow down in the summer? EF: Here, it's the opposite — it gets busier. We have a garden, it's Avenue C, and everybody's out.

How was the opening of this restaurant different than the opening of Seäsonal? WB: Well, I think the second project is always a little easier, because you're already exposed to most of the issues. EF: I think the learning curve is very steep. One also has to take into consideration the fact that Seäsonal is a Michelin-star restaurant, and fine-dining is a whole different beast from a casual, but still-ambitious, wine tavern/restaurant in the East Village — whole, separate issues. We have the same vendors at both places, and that really helps, but one reason that I think people are so happy with this place is that the quality is so superior. We don't compromise on anything. At the end of the day, it's all one family. If somebody has a bad experience here, it doesn't reflect well on Seäsonal, and the other way around.

Do you find that you have crossover from both restaurants? WB: Yeah, absolutely. It took a little longer to bring people from the East Village to Midtown, because people who live downtown usually don't travel above 14th Street. But we've had a few people from the Lower East Side and the East Village who decided that they would come uptown and come to Seäsonal as well.

Does it seem like it's been a year? WB: It feels like it's been a few weeks since we opened this place. EF: A newly opened restaurant is like a baby. It's a newborn the first week or two. Afterwards, you know what? You actually see it grow. This place has not been growing, it's been running.

It sounds like you're pretty happy with things here. Do you ever talk about a third place? EF: I mean, we're always looking. If a landlord comes and says that he wants a good, nice place in his building that adds value, which is exactly what we did here...I mean, when you compare the Italian place that was here to this place, it's day and night. WB: We're so happy that he gave us a good rent deal, but you know what? The door can always swing both ways. A lease can be an asset or a liability, and every restaurateur knows that. The good thing about a lease is that it has an expiration date — a marriage, it doesn't have one.

Is there a must-order dish at Edi & the Wolf? EF: There's a special item, which is a whole roasted duck. It's on the menu, but it's not on the menu — it's only available via 24-hour pre-order. It's a Long Island Peking duck, whole roasted with apples, oranges, and marjoram. It's served with a celery root puree, Brussels sprouts, bacon, and roasted apples, and then the whole thing is taken apart in the kitchen. How many people does that serve? EF: Four to six. It's a good deal.