Share All sharing options for: The New York Nightlife Year In Review, 2011

As 2011 slows winds down, why not take a look back at some of the stories that helped shape the Year In Nightlife? A splendid idea! 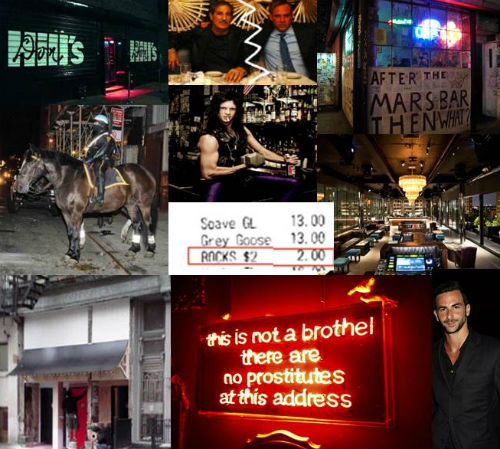 SAD GOODBYES— Let's take a moment to remember the bars and clubs that won't be joining us in 2012? The city grieved when the Eldridge was sold, ending its reign of terror, while nightlife kingpins Nur Khan and Paul Sevigny endured double setbacks with the surprise closing of Don Hill's after just a few months and Kenmare after just a year and a half. Meanwhile, Morgans Hotels bounced Armin Amiri from Mister H less than a year after opening, and Mars Bar, one of the few "real" places left in the East Village, closed to make way for condos, deeply hurting some but leaving others saying BFD.

NEW YORK TAKES VEGAS— Las Vegas finally decided to throw their hat in with New York's other nightlife operators not named Noah or Jason. The Box, 1OAK, and Pink Elephant all inked deals with major Las Vegas hotels, and there is a persistent rumor that the EMM folks are going to opening a branch of Abe and Arthur's and SL at the Hard Rock Vegas sometime in the next twelve to eighteen months.

VEGAS ON THE HUDSON— But the Dream Downtown went all Las Vegas on New York and decided to cram as many possible nightlife venues into one building as possible, partnering with the Strategic Tao Group to run all 900 different venues, and they brought in folks like Nur Khan, Angelo Bianchi and Aaaaalex Julian to help run the place. Vertical integration at its finest.

CONSOLIDATION— The theme of 2011. The biggest fish got even bigger, with the Strategic Group, EMM and Butter group all opening new venues and continuing to spread their tentacles throughout the city by hiring their ex-competitors to join their teams and bring their customers to them rather than continue to compete for the same limited dollars and prestige. Will the big continue to get bigger in 2012 or will some new operators finally break through?

BOTTLE SERVICE— The Great Recession was thought to be powerful enough to destroy the scourge that is bottle service forever. Unfortunately for mankind, bottle service proved itself to be more resilient than even a global debt crisis and 9% unemployment rate. It looks like nightlife is stuck with it forever.

LE BARON— It's still not open, even though everyone thought it would be at some point during the past twelve months. But the construction on the three story venue is finished and the only thing that is needed is the final liquor license approval from the SLA. This is expected to be the next big opening in New York, and from what we hear around town, will probably the hardest (and Frenchest) door in the country.

LES NIGHTLIFE CRACKDOWN— Every weekend for a few months was filled with news of the NYPD raiding a Lower East Side bar and shutting them down for a few days for a bunch of trumped up charges related to underage drinking. And it wasn't just the shitty bars that no one really likes. Venerable establishments like Max Fish were even shut down. The bars lost a few days of business and usually wound up agreeing to some stipulations and paying a fine before being allowed to reopen, leading some bars to go so far as to banning anyone under the age of 21 from entering, including this guy. The hysteria died down after a small bar fought back against the NYPD and won, and things have been relatively quiet there ever since.

AUTO TIPPING ON THE ROCKS— 2011 was a banner year in Receiptrocity and getting Tipped Off. Society rose up against restaurants, bars and clubs that tried to stick their customers with automatic gratuities "for their convenience" and finally said they weren't going to take it anymore. Customers also began to question why their receipts included an additional charge for "rocks." Some thought they were being charged for ice, while the venues claimed that it was an accounting tool used for rocks pours of booze, which are larger than a neat pour. Some bars just seemed to make it up as they go.