Share All sharing options for: The Year in Tacos, 2011

There was a lot of taco news in 2011, so let's just jump right in. Here's a look back at the year in tacos:

The Dawning of a New Taco Generation: 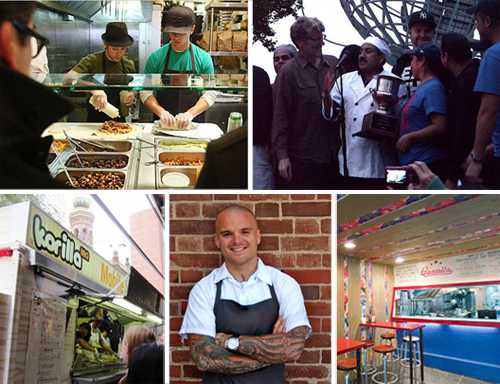 At the end of 2010, it seemed as though New York was on the cusp of a taco renaissance. Some of the best chefs in the city were trading Michelin stars for beans, salsa, and guacamole. Taco slingers were serving their tortilla-wrapped gems in strange new ways to an adoring public. And in 2010, the dish began to cross cultural barriers like never before.

But in 2011, the taco revolution experienced some growing pains.

A Tough Time for Tacos:

In January, Paty's Taco Truck was shut down by the NYPD for operating out of a metered spot. The worst part? They were serving dollar tacos that day, to raise awareness for a vendor rights rally. This was just the beginning of a long fight that the taco vendors (and other, non-taco vendors) waged against the City of New York — it's a battle that's still being fought today.

In May, the taco-loving world was rattled by the words of one influential food blogger, who suggested that wd~50 vet Alex Stupak was wasting his time at his new taco restaurant, Empellon. The chef fired back:

I'm doing this at great risk. I know I'm not the best at it and I knew that opening this restaurant would be a shaky proposition but I'm ignoring the imminent risk of failure and destruction of what little reputation I have because I really do love this cuisine that much.

And in September, the taco uprising suffered its greatest blow when NYC's beloved Korilla truck was eliminated from The Great Food Truck Race. Sadly, they were disqualified for cooking the books. But here's a question: would it have been such a big deal if Tyler Florence had just let them off the hook this one time? Reality TV is all smoke and mirrors, anyway. Side note: Tyler Florence couldn't cook a taco if his life depended on it.

Tacos Every Which Way But Loose:

There were setbacks in the taco world this year, but there was also a lot of great progress made in the tortilla arts: Riverpark served a taco with oysters, Beauty & Essex crafted an extra-fancy taco stuffed with fried lobster chunks, and in a bold act of engineering, Zengo put a taco cart on their roof.

Two guys that work for Chipotle even made their apartment look just like a Chipotle — that's dedication. Hopefully, they found some place to put all those discarded avocado skins.

Tacos vs Burritos vs Nachos vs Chimichangas: 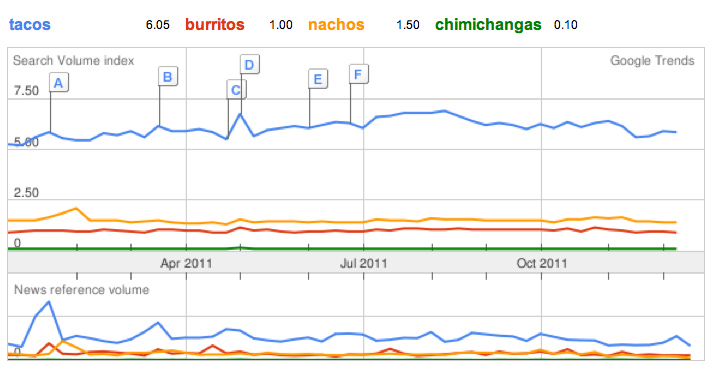 The internet loved tacos this year — just look at the Google Analytics. They were way, way more popular than burritos, nachos, and chimichangas. Maybe next year, chimis.

Taco Praise:
Here are some of the wonderful things that critics had to say about tacos this year:

"There are crisp portions of duck confit with Swiss chard; lobster with field corn and epazote; funky beer-braised pork tongue with potatoes, cotija cheese and fiery chile sauce. Oh, my."

— Sam Sifton on the tacos at Empellon

"Tacos made with grilled nopal, mushroom and poblano are charismatic enough to stand up to any of their meaty compadres, even the sensational housemade chorizo ($11)."

The Past, Present, and Future of Tacos: 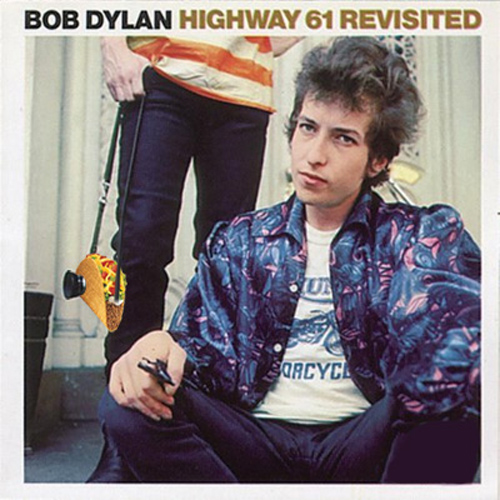 [Photo via Album Tacos]
What does the future hold for tacos? It's possible that the taco chefs of the city will look to the past for inspiration, or maybe they'll make tacos even crazier than they already are — we'll just have to wait and see. But one thing's for certain: tacos have a big bright future in New York City. They're messier than burritos, but man, sometimes they just hit the spot.

A Taco Moment of Zen: