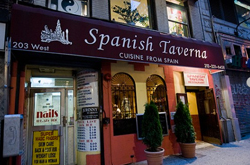 3) East Village: EV Grieve spots an eviction notice on the door of Timi's Gelateria Classica, the "gelato franchise for the 21st century" that opened just over a year ago and went on the market back in August. [EVG]

4) Fort Greene: A couple of weeks ago the original location of Abistro on Carlton Avenue in Fort Greene closed. Luckily, last April, the owner opened a second location five blocks away.

5) West Village: File this under ambiguous shutter. From a West Village tipster: "Sam Bahri-the large steakhouse on 6th Avenue (in the old Scuderia location) is now closed. There is a sign in the window saying closed Sunday and Monday. It never reopened and there are all kinds of vendor notes/mail etc." He explains why, "Business was basically non-existent there. I walk my dog by there 3 times daily and there were never more than 10 people in that huge space. Reviews were brutal on Yelp--yet I heard the food was pretty good." Phone calls go unanswered but their OpenTable account is still active. Update: Sam Bahri's steakhouse was just closed temporarily. They are back open to the public. Apologies for any confusion the above comment may have made. [ShutterWire]
· Previous Editions of The Shutter [~ENY~]