It can be hard to find something good to eat at the airport, especially if you don't have a lot of time to search around. But, there are a few gems out there if you know where to go. Here's a handy guide to eating and drinking at LaGuardia with info about all of the restaurants in each terminal, and recommendations for where to go if you have some time to kill, or if you just need a quick bite on the way to the gate. 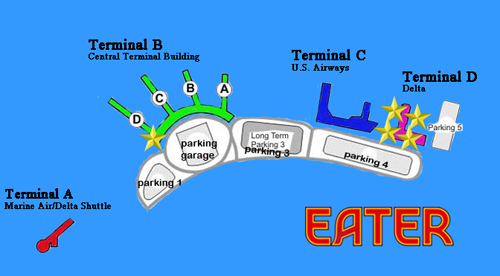 1) Five Guys: It's no Shake Shack, but the recently opened Five Guys has burgers and fries good enough to beat out the food at almost all of the other LaGuardia fast food eateries. [Terminal B, pre-security]

2) A Taste of Pat La Frieda: Famed meat purveyor Pat LaFrieda helped develop the meat blend for the burgers here, which are made to order, and served "with all the fixings". And there are also milkshakes, made in-house. [Terminal D, post-security]

3) Crust: Bread master Jim Lahey used his experience from his pizzeria Co. to develop the menu for Crust, where, appropriately, you can build your own pizza or select from a variety of pre-made creations. You can also choose from a variety of antipasti and salads to accompany your meal. [Terminal D, post-security]

· Taste of Bisoux: Here Minetta Tavern and Balthazar chefs Riad Nasr and Lee Hanson created a menu of French country classics. Great spot for a drink* (post-security, by Gate 3).
· Taste of Prime: Porterhouse chef Michael Lomonaco brings a steakhouse to the boarding gates, with "steaks, chops, burgers, fresh salads and fish." Note it's relatively pricey and there have been accounts of slow service (post-security).