Share All sharing options for: Nooi, The Speakeasy, JBird, Tillie's, and More Shutter 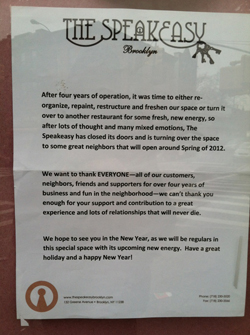 1) Midtown: From the tipline: "Nooi, on Lexington Avenue, has closed. A sign on the window says that they'll be relocating soon. Kind of a shame because while it was a strange concept (French pasta chain) the people there were really nice and it hit the spot when I wanted high calorie junk food for lunch." [ShutterWire]

2) Soho: Again, from the tipline: "Valley Shepherd Creamery has closed on Sullivan Street in Soho. That's much sadder to me because they're from my hometown. I'm glad to hear that they've opened in Park Slope because I really wish them well (although the location in NJ seems to be doing just fine)." [ShutterWire]

3) Fort Greene: The Brooklyn Paper reports the sad news that Tillie's a beloved coffee shop in Fort Greene, will close at the end of the month. The owner of the 14 year-old cafe says she's shutting it down because her landlord is increasing her rent. [BP]

4) Clinton Hill: Four year-old bar and restaurnat The Speakeasy in Clinton Hill has closed and will reopen as a new entity under new ownership in Spring 2012. [ShutterWire]

6) Midtown: Quasi secret Midtown bar JBird is closed while the team focuses on launching an Upper East Side branch of the bar. Supposedly the Midtown spot will open again eventually. [Zagat]