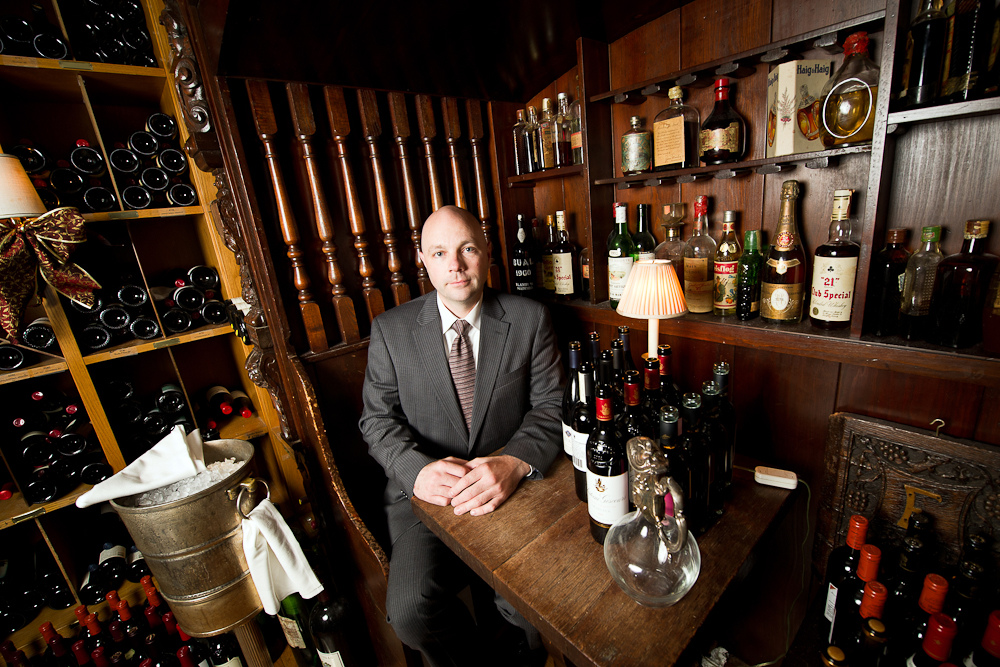 Some purists might complain that '21' Club has gotten soft in its old age. These days, you can and waltz in with a jacket, slacks, and *no tie* at dinner. If you don't want to commit to a full meal, there's a new bar up front where you can sip draft beer and graze on tapas-style finger foods. And, if you make a reservation via e-mail, you'll be rewarded with a free drink at dinner. Chris Haarsgaard, the restaurant's Director of Operations, says that these changes were necessary and that they keep the restaurant relevant and accessible. He also maintains that the spirit of '21' hasn't changed one bit. We recently chatted with Chris about what it's like getting a table there these days.

If you're dressed for it, what's the best time to pop in to '21'? Chris Haarsgaard, Director of Operations: Monday through Friday, generally before 6:30 PM and after 8:30 PM. I mean, our restaurant seats 155 people — it looks much smaller on the outside — and we serve the whole menu in the bar and in the lounge, and we have a smaller menu at night with tapas-style finger foods, if you will.

Tell us about some of your favorite customers. We have so many loyal and regular customers that it would be hard to name just one. We tend to get excited about the celebrities and things like that because they stay in your mind. Last week, we had Martin Short and Matthew Broderick here for lunch — really wonderful, genuine guys. George Clooney has become a favorite of ours — he treats everyone like they're his best friends. We've been here for 82 years, so we have customers going back for at least 50 of those, and families that have been coming here from the beginning. That's something that we pride ourselves on.

That's funny. I remember in Manhattan Murder Mystery, Woody Allen takes his son here for his birthday, like it's a big tradition in their family. I think we're still the most filmed restaurant in history — The Sweet Smell of Success and any number of modern films, as well. We love it, not just for the exposure, but we're used to dealing with the press and moviemakers and things like that, and I think we do a pretty good job at it, as well. We're easy to work with, I'd say.

What's the most popular table? The most requested table is Humphrey Bogart's table, which is table number 30, which is called "Bogey's Corner." We're kind of different than most places in the sense that our most desired tables would be the least desired tables in other restaurants. The tables in front of the door and the ones near the kitchen — those tables are still in demand because of the exposure and because our regulars choose to sit there. So, that's an interesting problem to have.

Let's talk about the wine cellar. What are the "crown jewels" of that collection? Nixon's family still has a fair amount of bottles down there, and his family still comes in and and enjoys the wine.

They're not just artifacts? No, it's an active cellar. We have a Grand Award wine list from Wine Spectator, so we have 14,000 active bottles. The cellar is also a dining room — we have a table for 22 down there — and we have private stock that some of our long-time regulars still enjoy.

Have any celebrities or politicians placed any bottles down there lately? We haven't accepted anything in the cellar in a few years, with maybe one or two exceptions that don't come to my head right this minute. Oh, Chelsea Clinton has something down there. They still come in, and it's nice to have them. She had her birthday party here.

What's the strangest request that you've accommodated? We're probably like everyone else these days — we don't say no to anything. We get a lot of dietary requests like food allergies and things like that. We had a gentleman who requested everything pureed, but he wasn't of the certain age where you might expect that. He was in his mid-30s, but we didn't question it, we just did it. I can't think of the last time we said "no."

Any requests that you've not been able to accommodate? The most common request is to see the wine cellar, but if it's booked for a private event, obviously we can't take guests down there. And unfortunately, it is a very popular venue and it is booked a lot of the nights of the week.

Tell us about the new bar. We close down every year in August for about three weeks, and we do renovations throughout the building. It's an old building — over 100 years old — and it takes a lot to maintain it. So, we thought that we'd move the restroom entrances to the sides, and put in a ten seat bar and offer draft beer for the first time in 82 years, just to give it a little more street exposure. We love tradition, but we have to stay competitive, and little changes like this have made a great difference in our success over the years.

Three years ago, you famously relaxed the tie requirement. What's the status on the dress code these days?. We've relaxed more than the tie at this point. I'll say this: we prefer everyone to dress not formal, but a little better than business casual. A jacket is still required in the dining room, but when we built the bar, we recognized that the times are changing and that we have to relax a little more than just losing the tie. So, we believe that if you come to '21' Club, you will be equally as comfortable in a black tie as you will be in a sport coat and a pair of khakis. We still do our best to enforce no jeans and sneakers, but we've made many exceptions over the last year, especially in the lounge. Again, it's a business decision. We were the last ones to require a tie, and we hung on to it as long as it made sense.

So, no jeans in the lounge? We're flexible.

Obama hasn't been here yet, correct? No, not yet, but he's got time. Former President Bush broke our streak. His family dined here during his entire presidency and they still come in, but George W. didn't make it. But prior to him, every president had a meal here, either lunch or dinner. We were disappointed. We asked his daughter and Barbara, "When's he going to make it? He's running out of time." And they said, "When he retires." And we said, "Well, it doesn't count," and they all laughed. We're waiting. But, Clinton came several times while he was in office and he still comes back — he's as friendly as ever.

What's the most popular dish at '21'? Probably much to the chef's chagrin, it's the burger. We're famous for the '21' Club burger, but we'd like everyone else to recognize that there's an entire other part of the menu that's good American food. We've got a lot of ties to the New York classics — the recipes for the Dover sole and the chicken hash haven't changed in years. We shop from local farms and the chef is very interested in all that. But, we're still trying to break the stigma of just being the place where you've got to put on a suit and tie to have a burger.
· All Coverage of '21' Club [~ENY~]

For more Gatekeepers published today from across the Eater Universe, head over to Eater National.