The Top 10 Restaurant Fights and Freak-Outs of 2011

Share All sharing options for: The Top 10 Restaurant Fights and Freak-Outs of 2011

Some of the biggest restaurant world headlines of 2011 involved fights, feuds, Twitter wars, lawsuits, chef flame-outs, and name-calling. Here's a look back at the year in fights and freak-outs: 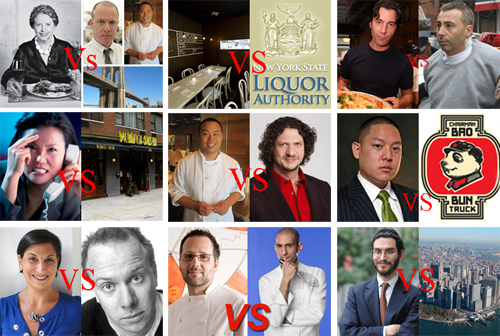 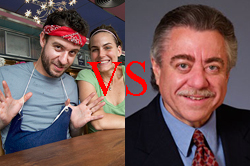 10) M. Wells vs Alan Richman: Did GQ critic Alan Richman slap an M. Wells waitress on the ass? That's the million dollar question. Richman was gearing up to write a rave of the now-shuttered Quebecoise diner in Queens, but things went off the rails on his final visit — his party was forced to wait a long time, they got a bad table, and the service was sloppy. The next morning, he received an e-mail from co-owner/general manger Sarah Obraitis which stated that a waitress claimed to have "received a hardy pat on the ass" from the critic that night. Richman vehemently denied anything of the sort, and launched into a takedown of the diner and the state of service in the restaurant world in general, noting: "I will tell you what else is extraordinarily self-defeating: We empower popular restaurants, and M. Wells is very much one of them...Such restaurants are rarely held accountable, no matter how uncaring they might be." 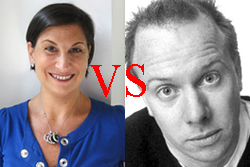 9) Merri Lee Kingsly vs Sam Sifton: In 2011, a lot of people complained that Times critic Sam Sifton was too harsh on the restaurants of New York, including Saveur publisher Merri Lee Kingsly. After Sifton lobbed a goose egg at Michael Psilakis's Fishtag, Kingsly took to the blogs to defend the restaurant and scold the Times critic. From her statement: "Mr Sifton...you need to stop being so rude to the chefs in our world that work so damn hard every single day and put every bit of passion and love into the food they cook so that people like me...and obviously sometimes you can enjoy...I am exhausted reading the nasty reviews." 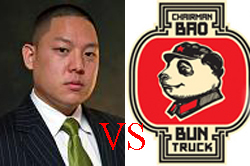 8) Eddie Huang vs Chairman Bao: A year-long East Coast/West Coast snack feud ended this October, when NYC chef Eddie Huang got San Francisco's Chairman Bao truck to change its name. The story goes something like this: Huang trademarked the name of his "Chairman Bao" bun just one day before the San Francisco truck also tried to trademark the name. After a year of back and forth, the West Coast truck finally switched its title to "The Chairman." In a statement, Huang remarked: "Fuck chairman truck and the chef running it. You should have named ur shit bukakke truck but clearly you want to be Chinese. Like our sister accounting firm, the Jews, you got to ask 3 times. All praise be to Allah. Ima go feed my pigeons." 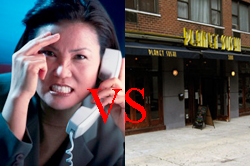 7) The Semen Tuna Roll Lady vs Planet Sushi: In May, we learned that a woman was suing the Upper West Side's Planet Sushi because she thinks they served her semen-laced spicy tuna rolls. After eating the sushi, she apparently felt ill and suffered "physiological and psychological injuries." The takeout order in question was consumed back in 2008, but the woman held on to the rolls as evidence and sent them to a lab for testing: two results were inconclusive but one indicated the possible presence of bodily fluids. Planet Sushi filed a motion to dismiss this summer, but the motion was denied and there have been no further developments in the case since. 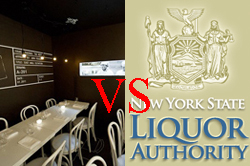 6) What Happens When vs The Community Board 2 and the SLA: John Fraser's artsy, affordable pop-up What Happens When was one of the year's big hit restaurants until it lost its liquor license and was forced to close. Fraser and his crew inherited the license from former tenant Le Jardin Bistro, but when it came up for renewal, they met huge opposition from the Community Board 2 who thought this was an example of "the new backdoor means by which an eating and drinking establishment obtains their liquor license." The SLA eventually revoked the license and the restaurant closed months earlier than the owners had anticipated. Now, Fraser and his partners are suing the lawyers that handled the botched license application. 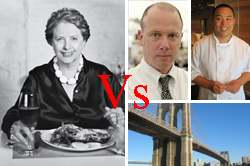 5) Mimi Sheraton vs Sam Sifton, David Chang, and Brooklyn: One of the year's best rants came from veteran New York Times critic Mimi Sheraton, who was promoting a new dinner series in Capital New York. Sheraton ripped into Sam Sifton's style ("I don’t like it at all"), David Chang ("I really don’t take him seriously as a chef"), and the whole Brooklyn food scene in general ("I’m from Brooklyn, but it would take a lot to get me there for dinner"). Chang, Sifton, and other critics/Times staffers offered their retorts via Twitter. 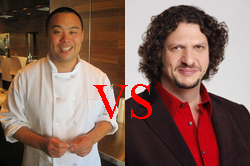 4) David Chang vs Jay Rayner: David Chang and the Guardian's Jay Rayner engaged in a hilarious Twitter feud after the writer criticized Ma Peche for not serving dessert. (As it turns out, the restaurant started offering dessert a few days after Rayner visited.) Chang tweeted: "Dear Guardian UK. Didn't know fact checking was optional. This is very silly. It's irritating and utterly British. Bon chance Motherfuckers!" To which Rayner replied: "@davidchang Blimey. What would you be like if it had been a properly bad review." The whole thread is worth a read, but Chang got the best line in at the end: "Dear Geoffrey Rush u helped King George with his stammer, can u help Rayner with his writing skills. We will get the food better, promise. xoxo dc." 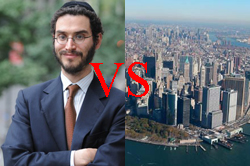 3) Maimon Kirschenbaum vs The Restaurants of New York City: Infamous attorney Maimon Kirschenbaum sued a lot of restaurateurs this year, including: Daniel Boulud, Eric Ripert and Maguy Le Coze, the owners of Milos, and the Fresco by Scotto clan, to name a few. All of these suits were filed on behalf of current or former employees of these restaurants, mostly for things like tip misappropriation and unpaid overtime hours. In a Post article about these sorts of lawsuits, previous Kirschenbaum-target Joe Bastianich noted: “Money-hungry lawyers, through frivolous lawsuits, are shaking down the very foundation of Manhattan’s restaurant industry...We opened Eataly and put 700 jobs in the New York economy. Since then we haven’t opened another restaurant in New York, nor will we." 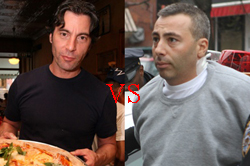 2) Mark Iacono vs Benny Geritano: The most shocking chef story of the year: in April, news broke that Lucali pizzeria owner Mark Iacono was brutally stabbed in a knife fight with lifelong acquaintance and alleged mob associate Benny Geritano. The attack, which happened in broad daylight in front of Joe's Superette in Carroll Gardens, left Iacono in the hospital with severe wounds. Rumors swirled that the fight may have been related to a mob shakedown or a love triangle, but charges against both men were dropped after a series of court dates in May and June. Once the dust had settled, Geritano told the Daily News, "Mr. Iacono is a great guy...I know him my entire life. He's the greatest." 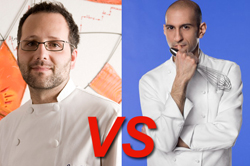 1) Jehangir Mehta vs Jesus Nunez (AKA Graffiti vs Graffit): Jehangir Mehta, the chef and owner of avant-garde East Village restaurant Graffiti, was not pleased to learn that Spanish chef Jesus Nunez had opened an avant-garde restaurant on the Upper West Side called Graffit. He was also pissed off about the fact that this other place was serving food made with Pop-Rocks (one of his signature ingredients). Mehta filed a lawsuit for copyright infringement, and after some back and forth in the press, Nunez agreed to change his restaurant's name to Gastroarte. In June, Mehta remarked: "I'm sure he is talented and he is going to get sympathy and I myself feel very sorry for him...But I hope people will feel sorry for us as well. In fact, for us it was worse. Normally when people win a case they get something, but we got zero money."