Justin Warner Reflects on the Success of Do or Dine

Share All sharing options for: Justin Warner Reflects on the Success of Do or Dine 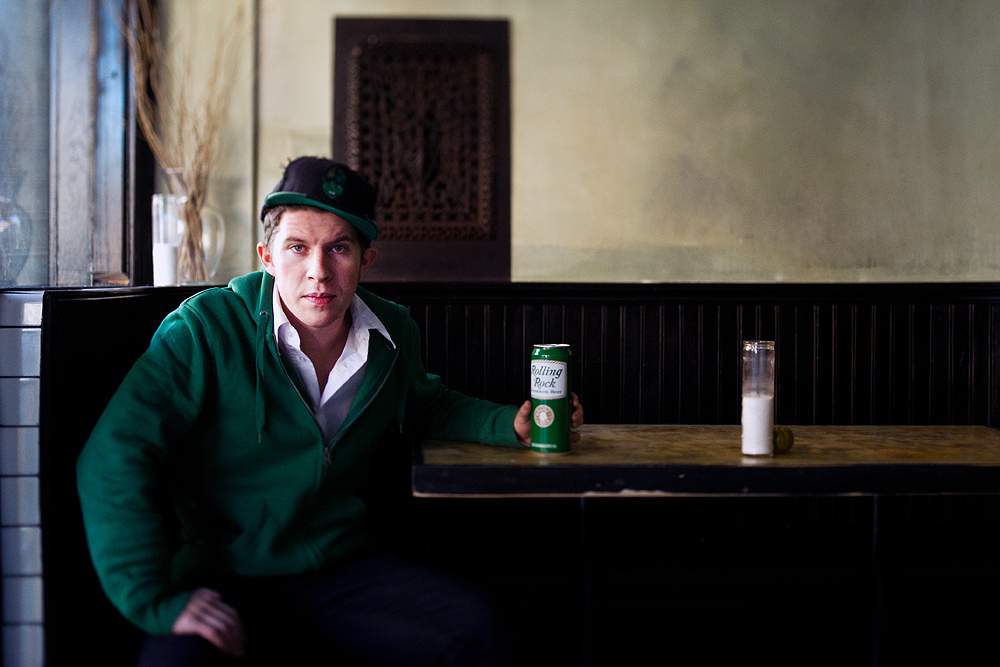 Do or Dine is the ramshackle Bed-Stuy bistro from Justin Warner and George McNeese, two former front-of-the-house workers at The Modern who decided to strike it out on their own. The restaurant initially got a lot of attention for its foie gras donuts and wacky dish names ("A Chicken And Woffals," "Pork Renderloin"), but the critics and bloggers also had a lot of good things to say about the food, the service, and the vibe of the place. We recently chatted with co-owner/general manger/host/culinary director/line-cook Justin Warner about what it's like getting a table there these days.

What's the busiest time of the week? 8PM Friday? Justin Warner, restaurateur: Generally It's a little bit closer to 8:30 PM, and I speculate that's because people come home from wherever they're working, and then they come here after surfing the net or something. But yeah, 8:30 PM on a Friday night is pretty damn busy.

What's the wait for two people? We have mostly deuces here, so two people is not really that crazy, generally. But, we've had times where it gets to be 45 minutes to an hour, and that's when there's already an eight-top waiting to be seated at the bar, and there's literally nowhere to go. It's rough. I've been really impressed by how people are really committed to sticking around.

How many seats are in the dining room? 24, maybe. It's really small.

How would you describe your clientele? I never would have thought that our demographic would be what it is. And when I say demographic, I say that to describe multiple, multiple demographics. The other night for example, some expats from The Modern were here, and Jack Lamb, the restaurateur. We get the industry types, but when I say industry types, I expect people wearing Danskos and Dickies with a little bit of today's soup du jour on the Dickies. And then we get what we call locals, who are people that have been in this neighborhood to witness its transitioning into a place that can support say, a wacky-ass restaurant. Still to this day, half those people don't even have to order — we know exactly what they want.

Any celebrities? Yeah, I mean, we try not to pay attention to that sort of thing, because to me a celebrity is a person who has not had duck before, and has duck for the first time here. That's a celebrity to us. But, I guess most recently, Travie McCoy from Gym Class Heroes just kind of pulled through with his posse and his manager and gave us some coconut Ciroc. He was an awesome dude — super amped about it. Our Twitter got like 59 followers after he mentioned us.

Danny Meyer restaurants are known for a certain kind of hospitality. Did you bring that style of service over, or change it at all? Well, you know, Danny would be the first person to say, "Who wrote the rule that...?" The way I always interpreted this was that rules are simply a set of guidelines for the most common situation, and a common situation happens at a restaurant maybe 40 percent of the time. So, you're dealing with the uncommon more often than the common interactions. A lot of that "Who wrote the rule that..." thing has just kind of gotten a Brooklyn accent, more specifically a Bed-Stuy accent.

For example, some guy came in, not naming the demographic, but he was probably collecting retirement. He was like, "These aren't desserts," referring to our Snickers bar. And I was like, "Good sir, what would strike your fancy?" And the same thing happened at The Modern. You see like Mango Craquelin or Pineapple Chartreuse, and that does not sound like cake and ice cream to somebody, and that is many people's perception of dessert. So, I went to the bodega, got two sheets of pound cake for $2, put a scoop of ice cream in between them, pushed that shit together and put it on the table. "Here's your dessert, sir." I pulled that same sort of stunt at The Modern, where I'd run to Burger Heaven on 53rd and get a hamburger bun and put a kid's Dover sole in between it, because he wants a fish sandwich, he's got braces, and he can't eat hard food, you know?

So, that's one aspect, but there is one way where we've diverted from the Meyer ideology. We're really here to help people have a good time, and we're really into serving people that are here to have a good time, and one thing that we're not so keen on is people that are hell-bent on having a bad time. Because, if your definition of having a good time is having a bad time, then I am going to rob you of it. And I will steal your bad energy, and that's what we attempt to do a lot. You get some people that are really hell-bent on going to a new hip restaurant and saying that they're not all that. I will find and hunt that person down. I can generally smell it the second that I walk in, and I will bludgeon them with kindness until they are bleeding joy. And if they won't bleed joy, they certainly won't bleed from their wallet. That's kind of the mentality.

So, explain the humor behind the dishes. I don't know why, but when we were working in fine dining, the little boy in me wanted to subvert everything, like make fart noises during the line-up. One time at The Modern, we served sweetbreads with cauliflower and chestnuts — if you imagine all of those things together, it looks like a bunch of brains. So, why not just call that dish "big pile of brains with confit of lemon," you know? I like the idea of a big pile of brains. I think that's funny. You know? Take it further — call it zombie food.

So, you're at the six month mark. How is morale right now? I mean, we are all working at what is the extent of human labor, and we're all finding it hard to be creative and find creative outlets, and none of our girlfriends are really enamored with us. But, every time somebody says, "Well, this is my new discovery for the day," that's someone that we have a chance to continue to wow. So, as long as people don't get tired of us, we're not going to get tired of this, and we're just going to keep banging stuff out.

What else would you like to do in the next six months? It's hard to say. I can hardly think six hours ahead — I'd like the lamb to be done. But, you know, it's hard to say because it kind of evolves as it goes. We don't even have a POS system yet, we're still using hand-cranked tickets. We don't have half the equipment that we need to make an operational kitchen. We got our first non-stick pan for making eggs yesterday. We'd actually like to have a protocol — a way of doing things. A standard napkin that we buy. We have an interview with a supplier today that will let us get quart containers. We've been buying quart containers from Chinatown on a bi-monthly basis since the get-go. It's little things, and that's just because we're disorganized. It's not that we're so busy, it's because we're disorganized and we don't know what we're doing because we're not really restaurateurs yet.

I'd say you are. I mean, you have a restaurant. Thanks. Yeah, I don't know — restaurants, pop-up, lemonade stand. It's all the same thing when it comes down to it. I guess the idea is that we want more fluidity that is invisible to the guests.

What else would you want to do here? I want to get a James Beard Award. I mean, we were already mentioned in Michelin.

What Beard Award? Restaurant of the year? No, no. Because we're not that. Leave it to big names. I think maybe menu design or something would be cool. Or maybe just restaurant design. For being all novices, we designed every single aspect of this place. George and I used tape to literally map out the kitchen. We've never designed a kitchen before, and we'd never worked in a kitchen before.

Did you see a bump because of the Michelin recognition? I would say that on any average night we have at least 15 patrons that are decidedly not from the United States, and I don't know many Americans that use the Michelin Guide, but I do know Europeans that use it. I know that from The Modern. So, where they got that info, I don't know...but maybe? It's something that we're very humbly proud of, but it's not something that we want to flaunt or say, "We're the first to bring the Michelin Guide to Bed-Stuy."