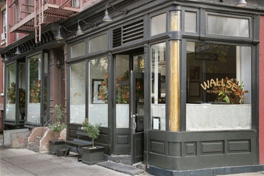 When chef Kurt Gutenbrunner opened Wallsé in 2000 finding, let alone pushing, even a handful of Austrian wines was anything but breezy. Now, 11 years and an Austrian wine renaissance later, Gutenbrunner and his restaurant group's beverage director, Leo Schneemann, can claim five primarily Austrian wine lists that have never been more relevant.

At Wallsé, Schneemann showcases Austria’s top shelf wines. The list pivots between producers like FX Pichler and Heinrich — key players that have ushered in a new era of Austrian winemaking — and steadfast interpreters of Austrian classicism like Knoll, Brundlmayer, and Nikolaihof.

He leans heavily on grüner and riesling here, but he’s careful not to exclude the characters that make up Austria’s white wine fringe, like zierfandler, rotgipfler, and neuburger. These grapes, though still niche, are reminders of the stunning diversity of Austrian wine that our market is finally bringing into relief. It’s hard to imagine that just over a decade ago, Gutenbrunner could barely find a dozen Austrian wines for his list. Now Wallsé boasts at least ten times that number, and though there are many international lists throughout the city with treasure troves of Austrian whites that can compete in both value and vintage depth, Wallsé remains beacon for Austria in its tireless effort to establish the country’s red wines.

Be advised, though, that what this list has to offer will come at a price. It’s difficult to spend less than $75 on wine and going by the glass won’t exactly ease the blow. It’s the sort of place that asks you make an occasion of it, and you might as well.

For those of us looking to slug a glass of Grüner or Blaufränkisch, there’s Blaue Gans—Gutenbrunner’s jeans and t-shirt take on Wallsé—whose wine list seeks to remind us that, despite the growing popularity of Austria’s wines, it’s still home to some of the world's best values. Here, $50 is all you need to dig deep into a list that’s varied and relaxed with enough surprises to counter its brevity. It's a collection of wines that exudes an effortless sort of whimsy that acts like the recess to Wallsé’s social studies class.

Both are great accomplishments in their own right that continue to be great arguments for Austrian wine. What they contain may not be quite as rare as it used to be when Gutenbrunner struggled to gather a handful of grüner back in 2000, but they remain nonetheless insightful.

Bang For Your Buck
Riesling, Steinterassen – Stadt Krems, Kremstal 08 (A) $70
Dusty winery with 550 years of history behind it, owned by the city of Krems. As of late the wine production has been exceptional. Classic Austrian Riesling - plenty of fruit, a touch of residual sugar, and ample acidity.

Riesling, Smaragd, Loibenberg – Knoll, Wachau 05 (A) $88
Though this isn’t exactly a bargain bin wine, this is well worth the price. Knoll is one of the great Wachau producers known for wines that are powerful, but tightly knit and extremely ageworthy. Though still young, this will show well throughout the course of a meal.

St. Laurent, Ladner – Bründlmayer, Kamptal 04 (A) $72
Brundlmayer is another one of Austria’s leading wine estate. Here the focus is on whites, but a small portion of red wine sourced from pinot noir, St. Laurent, zweigelt is also made. These are harder to find in the market, but show the same preference for leanness and minerality. This is classic, spicy St. Laurent that shows just how unique this variety is. Still has plenty of life ahead of it, but will show well now with about a half decade in bottle.

Blaufränkisch vom Leithaberg - Kollwentz, Neusiedlersee 07 (A) $74
Vinified using all natural yeasts and aged in neutral barrels, this is an approachable, honest representation of blaufränkisch—a grape that has been the Kollwenz family’s muse for more than 50 years. Fruit forward and versatile.

Off The Beaten Path
Rotgipfler, Tagelsteiner – Stadlmann, Thermenregion 07 (A) $55
Thermenregion, located just south of Vienna, is always playing second fiddle to the big name regions north of the city. But it’s here where the quirky grapes like rotgipfler—which is pain to pronounce but delicious to drink—have staked their claim. Floral and fruit-forward with enough acidity to make sure the fruit stays in line.

Crowd Pleaser
Zweigelt – Nigl, Kremstal 08 (A) $47
Nigl is one of the finest producers out of the Kremstal. They’re known firstly for their rieslings, but it turns out they aren’t half bad producing fruit-forward, sluggable zweigelt.

Break The Bank
Riesling, Steinriesler – Nikolaihof, Wachau 99 (A) $112
Stubborn, uncompromising brutes in their youth, Nikolaihof’s biodynamic offspring deserve time. This ‘99 is drinking right at the beginning of its window now. Waxy, intense, and mineral-driven and offered at a very fair price.

Riesling, Heiligenstein, – Eichinger, Kamptal , 07 (A) $127
The Heiligenstein vineyard is one of the most geologically unique sites in all of Austria and the wines that come from these vineyards are singular, intensely mineral-driven, and ageworthy. Brigit Eichinger’s style of winemaking works to provide transparency to unique sites like this one. Great, classic vintage that is lean and still austere, but will open with some time.

Comondor – Nittnaus, Neusiedlersee 04 (A) $126
One of the most exciting producers of red wines out of Austria, Hans and Anita Nittnaus’ wines act as arguments for the growing popularity of varieties like blaufränkisch and zweigelt. All farming is conducted according to biodynamic principles and there’s minimal intervention in the cellar. This is a blend of zweigelt, blaufränkisch, merlot, and cab aged in old Austrian and Eastern European barrels. Big and spicy, with earth creeping behind the scenes.

WTF?
The pricing on the lower end and by the glass is a touch too much. It would be great to have a few more wines in the $50 range, and a wine or three by the glass in the lower teens. The list also lacks the sort of vintage depth you’d expect from a list of this caliber.

Bang For Your Buck
Grüner Veltliner, FS Hinter der Burg, Prager 10 $64
Prager is a superstar producer out of the Wachau whose winemaking history dates back to the 1700s. The wines are restrained and favor citrus and minerality over bombastic fruit. This is about as electric as it gets. Lean, high acid, built for food.

St. Laurent, Sattler, Burgenland 09 $44
St. Laurent has spent the last year or so in heavy rotation. This highly aromatic import—hailing from the same family as pinot noir and tasting like the love child of it and syrah—is one of Austria’s most unique red varieties.

Heideboden, Nittnaus, Burgenland 07 $56
This is one of my favorite wines from this wonderful husband and wife team. A blend of zweigelt, blaufränkisch and a touch of merlot aged in neutral barrels. This is all bright zwegelt fruit, blau spice and a little funk.

Off the Beaten Path / Under $40
Dornfelder, Rapp, Nahe 07 (GER) $33
Even though dornfelder is one of the most widely planted red grapes in Germany most Americans have never heard of it. It’s a hybrid grape that’s well adapted to cool weather and is capable of stylistic diversity. Here, from a volcanic site in the Nahe we get to see the softer, leaner side of the grape.

Crowd Pleaser
Gemischter Satz, Wieninger, Vienna 10 $40
Rarely reputed as more than local swill, this centuries-old Austrian field blend (up to 20 varietals from the same vineyard) is in high renaissance. Clean, aromatic, and funnel-worthy.

Break The Bank
Riesling SM Kellerberg, Knoll, Wachau 05 $115
Another great Knoll offering, again from the 2005 vintage, here from one of the greatest sites in the Wachau. A great buy that will unwind with some time in the glass.

WTF?
On a list this brief the few wines that veer outside of Germany and Austria feel a bit random. Who really wants to be the person who comes to Blaue Gans and orders a bottle of cortese?