Share All sharing options for: The Rebirth of 90 Year-Old Nom Wah Tea Parlor

Every once in a while we like to take a look at the rich history of a restaurant that has survived for generations, outliving trends, critics, wars, Prohibition even. Today, as a leftover from Chinese Food Week, the famed, the endangered, and the eventually revived Nom Wah Tea Parlor. 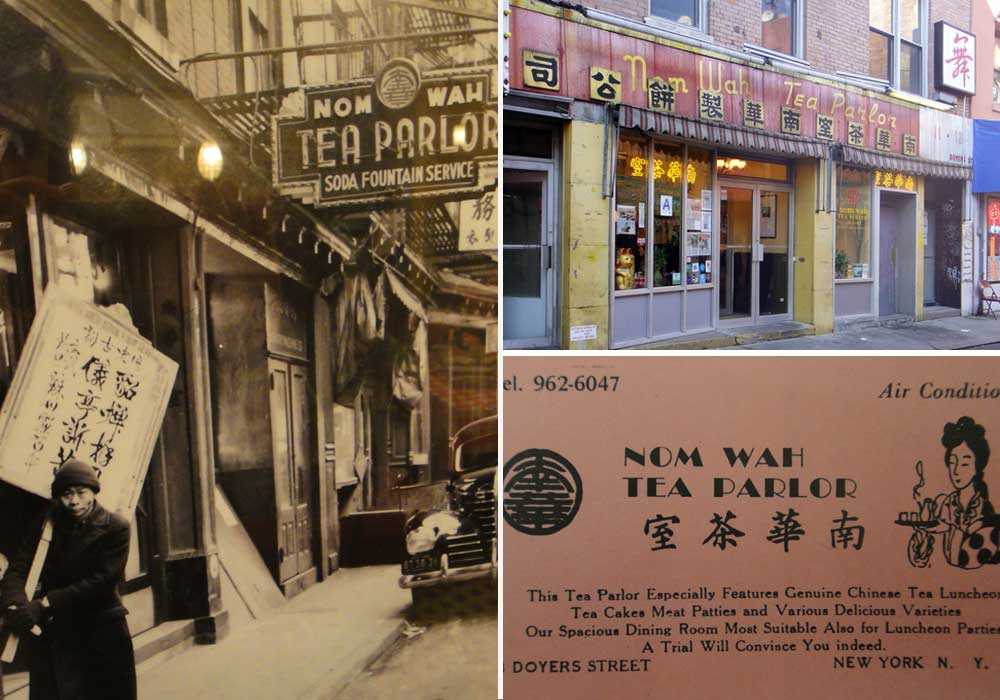 As far as businesses are concerned, though this applies to most anything, one doesn't get to the age of 91 in this town without going through some major evolutions. Thus the story of the Nom Wah Tea Parlor, open on the quiet and crooked little Doyers Street in Chinatown for almost a century, contains a lot of the familiar challenges and changes as its other old timey brethren, and in this case there's a very recent fortunate twist. 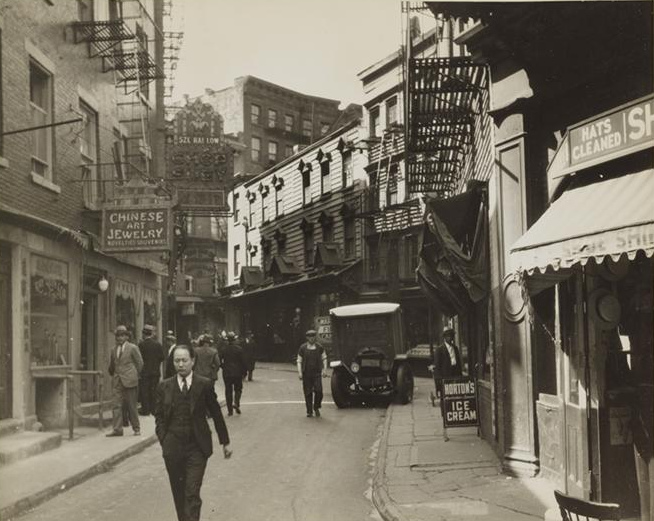 [A look down Doyers Street from the Bowery, by Charles Von Urban, 1932, from the collections of the Museum of the City of New York, link]

Nom Wah opened as a tea parlor and bakery in 1920 at 13-15 Doyers Street, secreted in the heart of Chinatown. New York history buffs will recall that the nickname for the street in the early 1900's was the "Bloody Angle," due to the sharp curve in the street (it connects Pell St. to Chatham Square) and its location as a popular fighting spot between the Tong Gangs of Chinatown. Criminals would hide in the curve of the street right across from where Nom Wah eventually opened and cut down rivals with hatchets as they turned the corner. Then they would flee through secret passageways or escape into nearby theaters. The block was so bloody, in fact, that law enforcement officials have said more people died violently at Doyers than at any other street intersection in the United States.

Editor markup for Nom Wah Vintage. This is only visible in the story editor.

Luckily, that violence was on the way out by the time Ed and May Choy opened Nom Wah, and it quickly became a popular bakery and tea parlor that served dim sum on the side. In 1950, Wally Tang, then 16, immigrated over from China and got his first job at Nom Wah. He quickly worked his way up in the kitchen and eventually graduated from running the kitchen to running the entire restaurant by the time he was 20. In 1968, Choy lost his lease on the bakery portion of the restaurant at 15 Doyers, but was able to expand to 11 Doyers, where the kitchen remains today. In 1974, Choy retired and sold the whole place, building and all to his employee of 24 years, Tang.

Throughout the 50's, 60's, 70's, and 80's, Nom Wah sold dim sum on the side, but their main forte was the bakery. And their specialty was mooncakes, a pastry filled with lotus paste and red bean filling that are staples of the Mid-Autumn Festival. Current owner Wilson Tang, the nephew of Wally, explains Nom Wah was famous for their mooncakes, and there would be lines out the door to get them. If you were Chinese and the festival was coming up, you were at Nom Wah.

Editor markup for Nom Wah 1950. This is only visible in the story editor.

Unfortunately for the business, competition increased by the 80's, as bakeries popped up all over the neighborhood. Additionally, the mooncake technology, as Tang explains, became ever more sophisticated in China and Hong Kong and shipping became faster and cheaper. Tang just couldn't keep up, and their pastry business began a slow decline.

Thus came a new focus on dim sum. At the same time that Nom Wah was transitioning over from a bakery focus to a savory one, the demographic makeup of Chinatown was changing. More and more Chinese found it too expensive to stay in the neighborhood and moved out to the newly growing Chinatowns of Brooklyn and Queens. And the clientele of Nom Wah became increasingly American and increasingly tourist as Chinatown evolved into more of a destination than a home for the restaurant's regulars.

By the time Richard David Story wrote this small New York piece in 1990, Nom Wah was seen as a thing of the past. Some neighborhood crowds came, but he wrote that "time has not been kind to Nom Wah," adding quotes from Craig Claiborne and Gourmet's Fred Ferretti deeming the place no longer worthwhile. He wasn't the first or last to note the decline of the restaurant. In 1993 New York had to run a correction because Gael Greene implied the place had closed, and in Jeffrey Steingarten's 2002 book It Must Have Been Something I Ate, the restaurant critic said the restaurant was on its last legs. 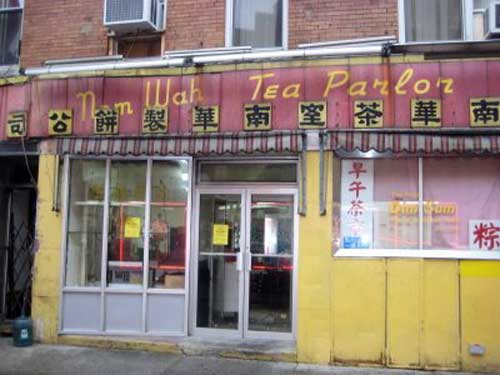 Throughout the years, no matter the focus, Nom Wah always held a duel role as the social club for the network of dim sum chefs across the neighborhood. There was always a card game in the back and Tang knew pretty much everyone in the neighborhood. The problem was, by the late 90's when Story and Steingarten were checking in, and especially after 9/11 when the tourist traffic dropped off dramatically, the restaurant was little more than a social club. Wilson, the younger Tang, explains:

In the last 15 years it was really on a steady decline. He had lost that ambition and drive to keep the restaurant full steam ahead. No one blames him, he's in his 80's. The business was steady and he didn't really have to worry about making ends meet because we own the building. That said, over the last decade this place was a more of a social club...People stopped coming, we were rough around the edges, we were closed by the Health Department two times.

He jokes that sometimes when people would come in for dim sum, they would have to run to the kitchen to steam new items and "sometimes we had to even go out and buy some stuff to serve because it was so slow."

Luckily, Tang was smart enough to realize he needed someone to revive the place to keep it alive, and that someone was his nephew Wilson. Wilson Tang, 33, spent a few years working at financial firms before opening a bakery of his own in Chinatown for five years. When his uncle gave him Nom Wah in 2010, Tang decided to make a few integral changes.

Editor markup for Nom Wah Renovations. This is only visible in the story editor.

First, he renovated the restaurant from November 2010 until February 2011. Tang is quick to note they never fully closed, as his uncle was adamant the door always be open to those who wanted to drink tea, play cards, or eat cookies. About 90 percent of the restaurant's renovations took place in the kitchen, where much of the equipment hadn't been updated since the 1950's. Out front, he kept everything pretty much the same, from the red vinyl booths in the back to the old antique fans, art deco tables, 1930's counter top, ancient cash register, and 1940's stove (the last two are used for decoration only). The one new addition: adding checkered tablecloths to the old 1940's tables to cover up dings and scratches.

One major front of house change he did make was switching up their style of dim sum. Instead of serving dim sum on carts or trays, Nom Wah now offers a menu with photos that diners order from. Everything is fresh, everything is made on demand, nothing has been sitting in a steam box at the bottom of a cart. Longtime regulars—who tell stories of hiding plates back when counting the leftover plates at the end of the meal was a means of tallying a bill—have complained some, but Tang contends the upsides—less waste, better product—far outweigh the negatives. He also serves dim sum until 9 o'clock, a bit of a novelty for a cuisine that is usually eaten for breakfast and lunch: "From the moment we open to the moment we close, this is what we're doing, this is what we're good at." That and they still sell two of their classic bakery items: the almond cookie and the roast pork bun.

What else has changed? He now hosts events at the restaurant at night. He's always looking for new cutting edge dishes to add to the menu. They have Facebook and Twitter pages. And he reaches out to media and to diners over the web. 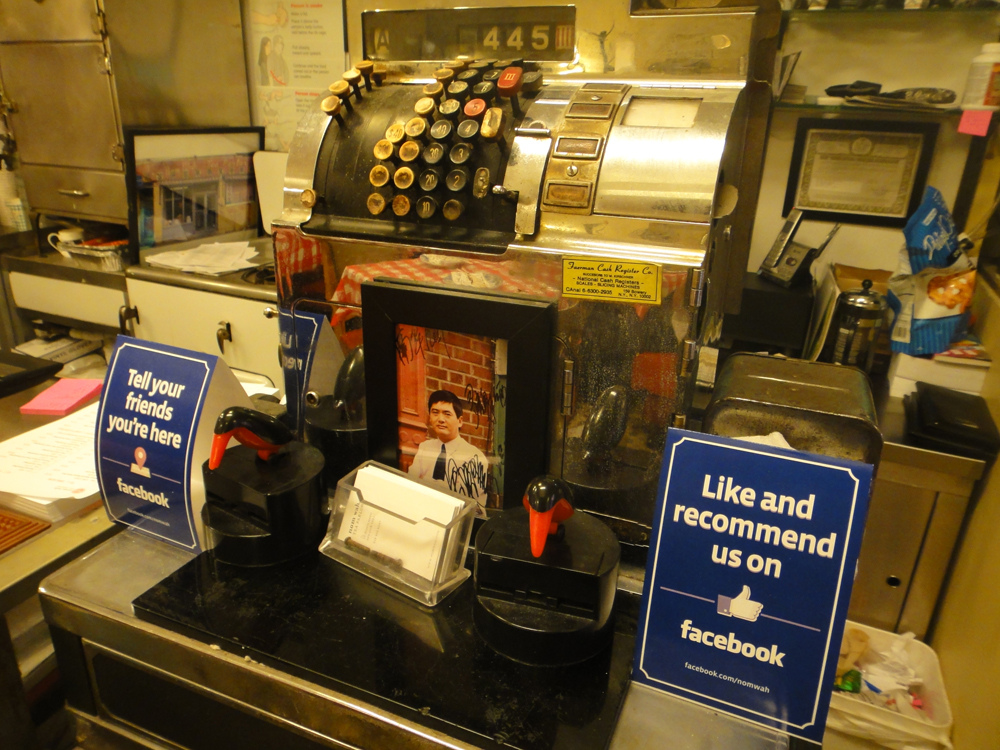 In fact, Nom Wah got such great media attention when they reopened in February, business has been fantastic ever since. Tang contends that the mainstream media coverage brought back all the old regulars and his social media push has attracted a younger generation. He notes, "It's been a great ride over the last 10 months and it's exceeded my expectations...I brought back a place alive that has so much rich history."
· Previous Editions of Living Legends [~ENY~]