Share All sharing options for: Marc Forgione Shows Off His Humongous Bookshelf 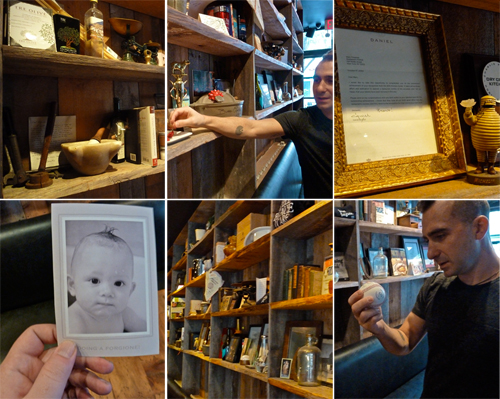 In the dining room of Marc Forgione's eponymous Tribeca restaurant, there's a bookshelf that's filled with cookbooks that Marc inherited from his father Larry, as well as gifts from chefs and customers. The shelves are also lined with good luck charms, including a bundle of sage that was used in a Native American ceremony inside the restaurant the week before it got a glowing two star review from the New York Times. Here's a tour from Marc: 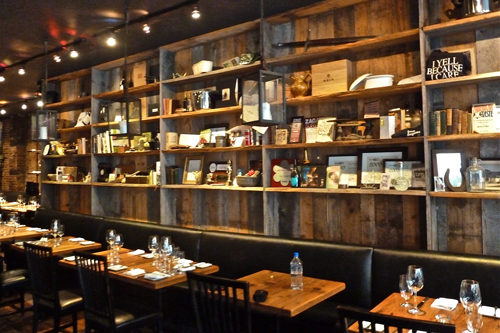 Marc Forgione, Chef and Owner: "We had no idea what was going to go on the shelves. No clue. We were just doing it because we had some wood left over — I think it was actually the contractor's idea. I was afraid it was going to look too fancy. But we put it in, and then the next questions was, 'What are we going to put on these shelves?' 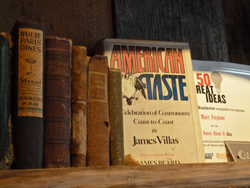 "If you take a closer look, you'll see that the cookbooks are really, really, really old. Most of them are from James Beard's personal library. He and my dad were really good friends. My old man got them at an auction.

"This is The Gentlewoman's Housewivery. This was written in 1896. Look — that's James Beard's inscription. I pull these down sometimes and look through them. A lot of cooking has one foot in the past, you know what I mean? People bring in old cookbooks all the time. 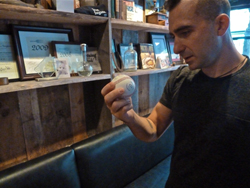 "This guy came in to eat. Gene Michaels — he was a Yankees player back in the day. His nickname was 'Stick.' 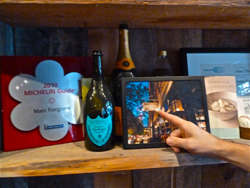 "This is kind of a funny little montage here. We've got Veuve Clicquot, then a bottle of O.E., and a photo of the sign with the old name, which was Forge. So, we poured a little of the 40 out as a joke, and then drank a bottle of Champagne. Because, as much as it was shitty to have to change the name, we were celebrating still being here, and a new beginning.

"I've been working in the restaurant business for a long time. I don't know how it started, but people feel inclined to write letters to say thank you, so we just throw them up there. Here, this one says, 'We had a great dinner, the cod special was fantastic.' 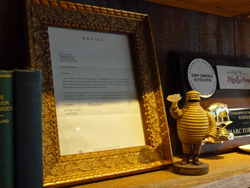 "Daniel Boulud is really, really classy. This is from after we got our Michelin star the first year, and it just says, 'I know how hard it is to get one, congratulations. It says a lot about you and your restaurant.' 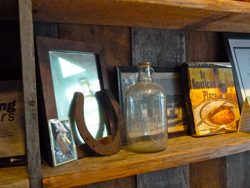 "This is a picture of the sawmill where all the wood comes from, and a horseshoe we found at the sawmill when we got the wood. It's in Rochester Massachusetts. My business partner and I literally packed every single piece of wood that you see with our own hands. We drove up there early one morning, loaded everything into the truck, and drove it back here. 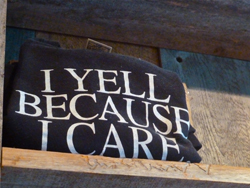 "'I Yell Because I Care.' That's because I kicked out that writer from the New York Times a few years ago. One of the cooks brought that in. 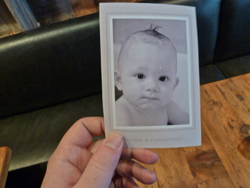 "One of my investors gave this to me. 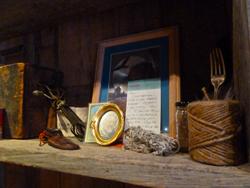 "That's my Native American montage over there. I've been going to sweat lodges and teepees lately. That sage actually blessed the restaurant. The weekend before we were getting reviewed — and we had no idea we were getting reviewed — the restaurant was blessed because we had a lot of weird stuff going on, like we had a lot of people fighting at this one table. So, we invited this guy over, his name is Little Hawk. He performed the ceremony, and five days later we got that beautiful review from the New York Times. We had no idea they were even in. So, I always thank Little Hawk for setting us on the right path."