Ed Schoenfeld on the Golden Age of NY Chinese Food

Share All sharing options for: Ed Schoenfeld on the Golden Age of NY Chinese Food

All throughout Chinese Food Week, we'll be interviewing the chefs and restaurateurs behind some of New York's favorite Chinese food establishments. Today: Red Farm's Ed Schoenfeld. 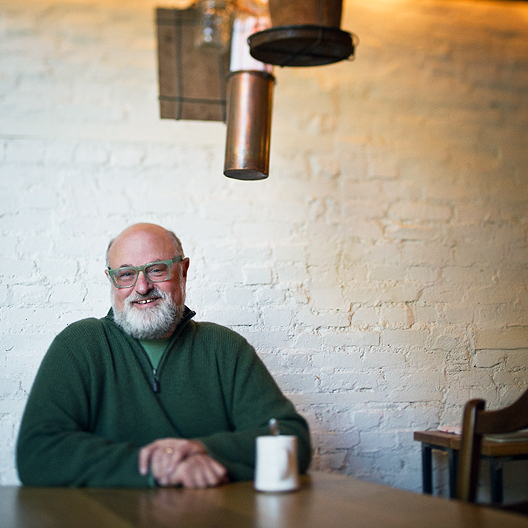 Ed Schoenfeld, like a few of our other Wok Stars, has been working in the restaurant industry here in New York for the past 50 years. Unlike all of our other Wok Stars, he's not Chinese. In fact, he's a Jewish guy from Brooklyn who grew up in private schools and gave up his scholarship to NYU to focus on food writing, cooking, and restaurants. By the time he was 19, he was learning from legendary Chinese culinary instructor Grace Chu. At the age of 20, he ran front of the house at one of New York's first ever Hunan (and New York Times four star) restaurants Uncle Tai's Hunan Yuan. Later he moved on to work at other mid to high end Chinese restaurants around town, created a number of other spots (including one restaurant called Pig Heaven) took hiatus to travel, write and eat around the world, and eventually went on to create Chinatown Brasserie and the newly opened Red Farm.

Today, instead of a straightforward interview, we've taken excerpts from our chat to create Schoenfeld's oral history of Chinese food in what is widely accepted to be the golden age of white tablecloth Chinese restaurants in New York, which began in the mid-60's.

What was going on in China:
The one fundamental fact of Chinese food all over the world is that when the Chinese communists took over China on October 1, 1949, 11 days after I was born, Chinese culinary life changed profoundly. China was a very wealthy, stratified country which had a rich class. There were people who were chefs who worked in restaurants. But by and large the best chefs in China didn’t work in restaurants; they worked for patrons in their houses or in some kind of institutional situation. When communism came around it was totally uncool to eat luxurious foods, and they soon became unavailable. And chefs who cooked this pretty rarefied cuisine (called Imperial cuisine), they really couldn’t continue what they were doing. The ingredients weren’t available to them any more.

A number of chefs moved to Taiwan and Taiwan has been the museum of regional Chinese cooking for a long time, and still is. Of course all those regions in China never stopped existing but their culinary life profoundly changed. One of the biggest problems is that the whole teaching process of master and student was disrupted so successive generations weren’t able to learn this craft the way they had been able to previously.

How it affected the Chinese restaurant world in the US:
In those days it was against the law of the U.S. to have Chinese people immigrate here...Everything changed in the United States beginning in ‘65,’66, ‘67. Why? Because we changed our immigration laws. So wealthy Chinese who up until then had only been allowed to visit here were suddenly allowed to move here. And there was a whole wave of immigration that took place. And along with that group of wealthy Chinese people, chefs came. And a lot of these chefs were the chefs that had been cooking for them in the late 1940s.

...So in the U.S. in the late 60s and early 70s that is when we first started having Szechuan cooking and Hunan cooking. That is when Americans who were interested in gastronomy, in Chinese food in particular, that is when they got introduced to real authentic regional Chinese cooking and the best of these chefs who came here in that era were some of the best chefs of the century who had fled China and were bonafide three-star Michelin chefs.

On Tiger Wang and David Keh:
There was a chef to the Chinese ambassador in Washington, nicknamed Tiger or TT Wang. And Michael Tong [The owner of Shun Lee] went to go work for TT Wang sometime in the early 60s and worked his way up to a captain, manager, and in about 1970 TT Wang and his front of house guy decided to open a new restaurant that still exists today and it’s the Shun Lee Palace at 155 East 55th St.

I became friendly with this restauranteur David Keh. Basically David Keh and Tiger Wang who were competitive restauranteurs they both saw that this stuff [Szechuan cooking] worked like wildfire. They would hire chefs who would work for six months and they would go and open their own Szechuan place and we went from having three places serving Szechuan to 15 to 120 to having them every place in America.

As it grew, the quality got worse. The labor pool wasn’t so big and both of these business guys were going to go to Taiwan and look for the next Szechuan. Each of these guys went to Taiwan and there was one restaurant that stood out so much that they each scoured the community for chefs who knew the recipes of this restaurant. They each brought a handful of these chefs back and they each opened a restaurant within weeks of each other and had virtually the same menu because they had copied the same place. Each restaurant got a review from the NY Times and each restaurant got a 4 star review. It took Hunan cooking from nowhere to the hot thing in the business. At the age of 20, I found myself as the only white guy and the host of one of these two restaurants, Uncle Tai's Hunan Yuan.

Time for Some Name dropping:
We had so many famous people in our restaurant and everyone there was Chinese and they had no idea who anyone really was. So they would gossip about customers all the time. So they would gossip about this funny looking faggot and it would be Andy Warhol. They’d gossip and say god, that guy looks grungy, he might rob us, I don’t want to let him in, and it would be Norman Mailer...If you asked me who my regular customers were when I started doing business, my regular customers were Aristotle Onassis and Jackie Kennedy, the Sulzberger family, literally the chairman of the board of each of the major networks...I had a conversation with Tennessee Williams one day...I remember the day I met Julia Child and she was kind of new to the world...I bet I served dinner to or had dinner with Craig Claiborne a thousand times. When James Beard had his 80th birthday I threw a party.

A Note On General Tso's Chicken:
Chef Peng [Ed: a Chinese chef that moved to Taiwan and is credited with serving the first General Tso's], his General Tso's chicken as he made it for the Taiwanese public was chunks of chicken in a brown sauce that was spicy, garlicky and tart. When the dish moved to United States Chef Wang, then the man at Shun Lee, the Hunan restaurant, he put some sugar in his sauce to try to cater to the American palate. And he made the outside of the chicken very crusty. His version of General Tso?s chicken is the one that has become the very popular version all around the world. And Uncle Tai?s we came in second place. We made a chicken in a brown spicy sauce and it was very delicious just simply a different preparation. However, we were the ?rst people in North America who served crispy orange beef.

And so went the Golden Age:
The sad part is not only did they fade out, a lot of their technique and recipes were not passed down to the next generation. When I go to a Szechuan restaurant in Hong Kong or Taiwan, it’s never as good as the food I had in NY city in 1969. These guys were better cooks.