Michael Tong Looks Back on 40 Years of Shun Lee

Share All sharing options for: Michael Tong Looks Back on 40 Years of Shun Lee 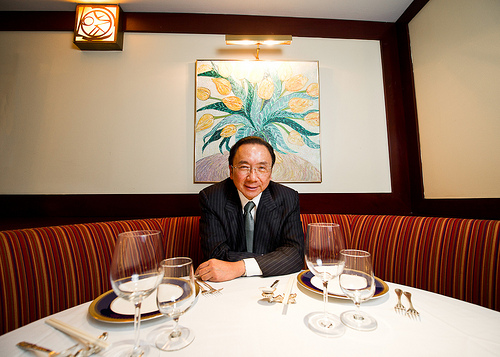 Michael Tong's Shun Lee Palace was one of the most influential Chinese restaurants of the seventies. The dining room had comfortable booths and tables topped with white linens, fine China, and forks alongside the chopsticks. The food wasn't Cantonese (the predominant style of Chinese cooking for decades), but rather a mix of Sichuanese, Hunanese, and Shanghainese. Although you could get some very authentic cuisine there, Shun Lee became most famous for American-influenced dishes like General Tso's chicken, Grand Marnier prawns, and crispy orange beef. Both Shun Lee Palace and its sister establishment Shun Lee West are still going strong today, and you can usually find Michael at one or the other during the week. We recently chatted with Tong about the legacy of his restaurants, and what's going on right now.

Tell me about your favorite customers. Michael Tong: Well, it's very difficult, because our customers range from movie stars to normal people. I would not want to say which movie stars or which politicians are my favorite people — I wouldn't say that. You always have to say, "Hey, who is your best patron? Who comes here the most? Who do you take care of the most?" They're your favorite patrons. I have Tom Cruise, I have Tom Hanks or Michael Douglas, all the time. But that does not mean they are my best customers. They are famous. All I'm saying is that whoever liked Shun Lee in the last 30 years, who came here the most, they are our favorite customers.

So, it sounds like you still have a lot of regular customers. Yes, we have a lot of regulars, since 1981 on the West Side, since 1971 over on the East Side. But, time goes by. 40 years is a long time. You can call this an institution. The reason being that not many restaurants stay alive after 30 or 40 years. Of course, the people that used to be 30 years old, they are now 70. If they were 40, they are 80 now. Customers that came here in the '70s and the '80s, we have their children come now. And, over the 40 years, you constantly establish new customers who come into the restaurant. Because, if you are without new customers, you cannot sustain. You cannot just depend on the customers who ate here 40 years ago — they are gone. So, constantly we have new customers who come in and fill their shoes and return, and people talk to their friends, so we must be doing something right.

Has the food at Shun Lee changed much over the years? Well, it's gradually changed. We don't want to call ourselves fusion. We're not fusion, we're authentic. If you have authentic cooking, you can't just change the basics. You can change the ingredients, you can use different new methods, but you cannot change the fundamentals. Chinese cooking is Chinese cooking. It's one of the top three always rated by people — French, Chinese, and Italian are the most popular cuisines even after all these years.

How do you think Chinese food in New York in general has changed over the last 40 years? Chinese food has been bad, to very good, to so-so. The second generation of the restaurant families doesn't want to get into the restaurant business. The second generation become doctors, they become lawyers, they go into other businesses. And, there are very few restaurants who are opening in the Midtown area that do not become fusion. To me, fusion is really Japanese, and you add a few Thai dishes, but it really is sushi, mainly. Maybe that's the way people want it today, because in the last 5 - 10 years, people became very health conscious. And also, Nobu created a beautiful new Japanese cuisine, and that changed all of Japanese food, and I give him very, very much credit. But, we are still going strong, and we are still happy for what we are doing, and we change dishes from time to time, wherever we need to, wherever we think is proper. Right now we're into steamed dishes, because we saw the popularity of healthy food. Instead of just being limited to chicken, shrimp, or beef, we created dishes using tuna, salmon, swordfish, rack of lamb, things like that. But as I said, we cook the way that the fundamentals are supposed to be, we just change the items.

Has there been a lot of turnover in the kitchen over the last 40 years? Well, we have the original chefs, which is very lucky, and chefs that have been with me for 20 or 30 years. But, of course, sooner or later they're going to retire, and to sponsor new chefs from oversees, it takes five years. It doesn't work that way. So, we have to find young people that are willing to learn Chinese cooking, and we have to see if these guys have the talent. Not everybody can do everything. So, we have to find talented chefs, and that's what we're doing now, we're training them. We try to bring them up, but gradually. To become a master chef, honestly, it's not like American cooking.

So, when you're not here, where are you eating? Oh, I eat everything. Everybody knows me. Jean Georges, Daniel, Mario — everybody knows me. I go to all of their restaurants. I don't eat at my restaurants every day, I really don't. Maybe once or twice a week, the rest I go out to eat.

Where do you go for Chinese food? Well, I mean, Chinatown. Maybe I go to a Cantonese restaurant by the name of Oriental Town. I go there for seafood, they usually keep steamed fish or steamed shrimp.

Would you ever do another cookbook? Well, I did it, it's my creation. The problem today is that everybody wants to get it downloaded from the internet, the computer. So, you spend a lot of time creating a book, and then you sell it for 40 thousand, 50 thousand dollars. 20 or 30 years ago, I could have sold it for half a million, easy. I probably...maybe now you put your recipes on Twitter, or on things like that. 30 years ago, they looked at the New York Times and Craig Claiborne's cookbook, and people don't do that anymore. Times change.