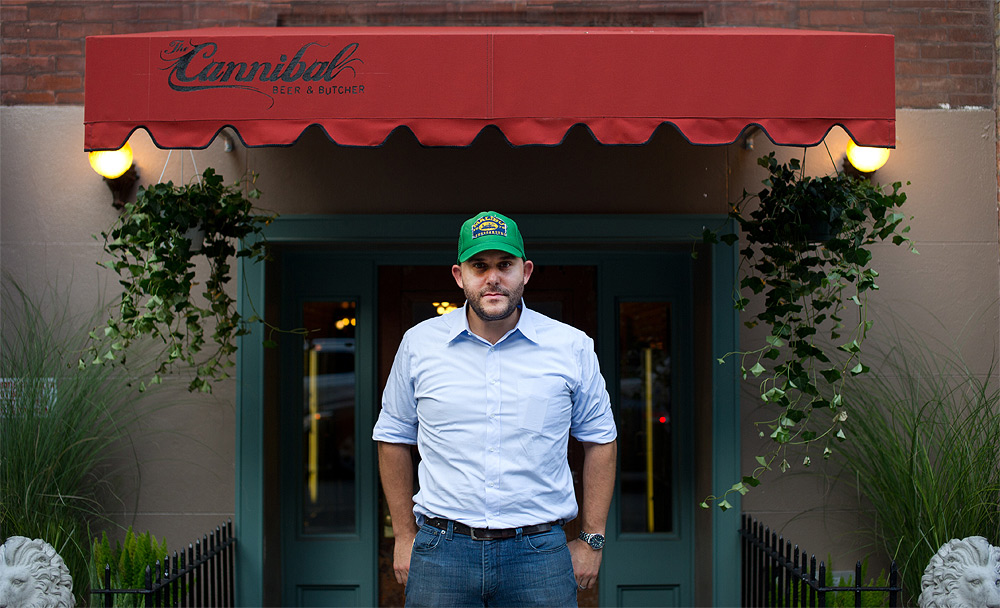 The Cannibal is the casual new next-door spinoff of Resto in Murray Hill. Owner Christian Pappanicholas basically created a bar and restaurant that pulls together many of his favorite things: craft beer, steaks, sausages, tartares, and bicycles (much of the decor is cycling-related). We recently chatted with Christian about what it's like scoring a seat there on a busy night.

So, what's the busiest time right now? Christian Pappanicholas, Owner: We're typically on a wait by 7:15 PM, Wednesday through Saturday. It's been sort of crazy-busy, but we move. The good thing is that our menu is designed so that you can sort of snack and sit, but you can also get a meal. It's meant to be sort of bar-ish and snack-ish and charcuterie-sh. I don't think we've been on a wait that's more than 45 minutes, yet.

Did the Resto customers get this concept right away? I think so, but we also gained a lot of new customers. You know, I lived in Murray Hill for 13 years. Although I recently moved to the Flatiron, my family and I have been in this area for a long time. It took a while for people to know where we were. We were sort of ecstatic to have the press that we got and the recognition that we got, but it's a different neighborhood than the West Village or the East Village. Our chef, Michael Berardino, he used to work at Dell'Anima — it's one of my favorite restaurants, I love it. You can go there at 5 PM or 1 AM and it's packed, because that neighborhood is just saturated with people that want to go out to eat every single night, at all hours. I think Murray Hill has that, but it's not as strong.

I'd say that this is sort of a "downtown" restaurant that's above 14th Street. You know, that's what I wanted. It's not to knock anything in our neighborhood — it's not in my mindset to think that way. But, it's just that I wanted something different; something that I would like in my neighborhood.

Tell us about your VIPs. I care about them the same way that I care about anybody else. I can count on one hand the number of actors we've had at Resto, and we haven't had anybody that I've noticed yet at The Cannibal. VIPs for me are people like Svetlen, who was our first customer ever at Resto and The Cannibal. We sort of let him be the first to try The Cannibal. He's a gentleman who lives in the neighborhood with his family, and he's frequently in here buying beer. We always take care of him. And with my immediate neighbors, I always extend the courtesy of bending the rules for those people.

Has it taken awhile for people to figure out the beer program here? It's still taking awhile. I think that people know that they can drink them here, but I think that people don't realize that you can take them away. People who live in the neighborhood continue to come in, and that's sort of what we're building. It continues to grow, and continues to mature. If you're looking for a beer, I can say, "Come with me, let's go pick one together." I'm very visual with my bottles, and we have 350 different selections, and you can pick them by sight. Like you might say, "Oh that's a beautiful label, what's that about?" And I'd say, "Well, it's sort of a hobby pilsner from the Marque in Italy, and it's brewed in a prison." You know, I think the visual interaction with the bottles is sort of a really nice thing, and I think we get to accomplish that with the butcher counter as well. I like that you can look and say, "That ham looks amazingly dark for me. I don't know why, but I want to eat that one."

So, what's the strangest request that you've accommodated at The Cannibal? We don't accommodate very strange requests. We sort of do what we do. You know, I get a lot of light beer requests. "Do you have any light beer? Do you have Miller Lite here?" Look, I respect light beer, I think it's great. In the summertime, when it's hot and I want to drink five beers, I drink light beer. And we have Miller High Life, and we have Coors Banquet beers, and Tecates, and Pacificas, and things like that. But it's sort of been a very high demand. I guess you try to explain to people that this is what we do. This is who we are, and this is what we're trying to curate, and this is what we're serving you. It's like, "Come to our world. Trust us, it's going to be fine." The other thing is that if you go to The Cannibal, and you drink light beer, you might still eat a lamb neck terrine, beef jerky, and cote de boeuf for two. It's the "McDonald's and Diet Coke" thing.

What's the most popular dish right now? The tartares. They're really the thing that people go crazy for. The steak tartare is so simple. Do you know the story behind it? Myself, Michael Berardino, and [chef] Bobby Hellen, we all went to Italy two years ago, and we spent some time cooking with some chefs and some friends and things like that, and we went to see Dario Cecchini in Tuscany. So, we had dinner with him, we were sent there by a chef friend, we ate dinner at his restaurant, and spent the evening chatting with everybody. The next morning, we went to spend some time with him, and he put a big bowl of tartare in front of us. He literally chopped it up, put it in a bowl, squeezed some lemon zest on it, put some salt on it, and pushed it across the table and handed us some chopsticks, and we ate that for breakfast. So, we were like, "Well, really with tartare, we should do the Dario tartare, and serve it with chopsticks."

So, how was the Halloween film series? It was a ton of fun. Really great. I was outrageously surprised by how many people got into it. I sort of love horror flicks, and I threaten to go to every haunted house in New York City every year, but I never do because my wife hates it. Hopefully, when my kid gets old enough to go to haunted houses, I'll take him. But the campy horror flicks, we just started talking about it, and I said, "You know, we should totally do horror flicks on the TVs." And, you know, TVs at The Cannibal was sort of a big thing. I am unilaterally against televisions at restaurants — absolutely. But with The Cannibal, and with the cycling thing, it was important, because during the Tour De France we have to have TVs here.

My dream is to have guys come here after big rides and throw their bikes in the backyard. We were in talks to sponsor a cycling team next year, and it didn't work out yet. We hope it will, and we all ride and we want to do rides out of here. So, the TV thing sort of came about because we thought about the Tour, and we typically play old cycling movies during service, like Quicksilver and Breaking Away. So, we just started talking about doing a series of horror flicks. It was fun. We did Dawn of the Dead and the Evil Dead movies. I mean, I'll play Army of Darkness every night because it's tremendous and great — classic Sam Raimi.

Would you ever do anything like that again? We talked about it. There was some conversation about Christmas movies. I sort of subscribe to that claymation world — there's something about it that brings me back to my childhood. The Year Without Santa Claus is one that most people don't know about, but it's the one with the heat miser and the snow miser — it's actually a little wacky. We've talked about it, and I think if the time is fitting, and the genre is right, we'll do it. I don't want to make a movie house here, but I think it's fun.

So, when you're not at The Cannibal, where are you eating these days? I went to Pulqueria and had a crazy meal down there. It was nice. I couldn't believe how far downtown that is. My wife and I were walking down there, it was sort of a breezy night, and I had one of those New York flashback moments. I was like, "I've been down here. I was down here 10 years ago, and I don't know why." And it was a sort of fun moment for that. I live on 26th and 6th, so The Breslin and The John Dory are definitely places where I'll stop and eat dinner, because it feels like I'm at one of my restaurants, but not — the style of food is very similar to what we do. So, it's really nice, and I think those guys do a killer job, no question about it.

What's the must-order dish at The Cannibal? The blood sausage with the apple, onion, and parsley. There's almost no lean meat in it, so it's really sort of broken, which is how the French do it. Besides that, the tartare is the way to go. You gotta get the steak tartare.
· All Coverage of The Cannibal [~ENY~]