All throughout Chinese Food Week, we'll be interviewing the chefs and restaurateurs behind some of New York's favorite Chinese food establishments. Today: Chin Chin. 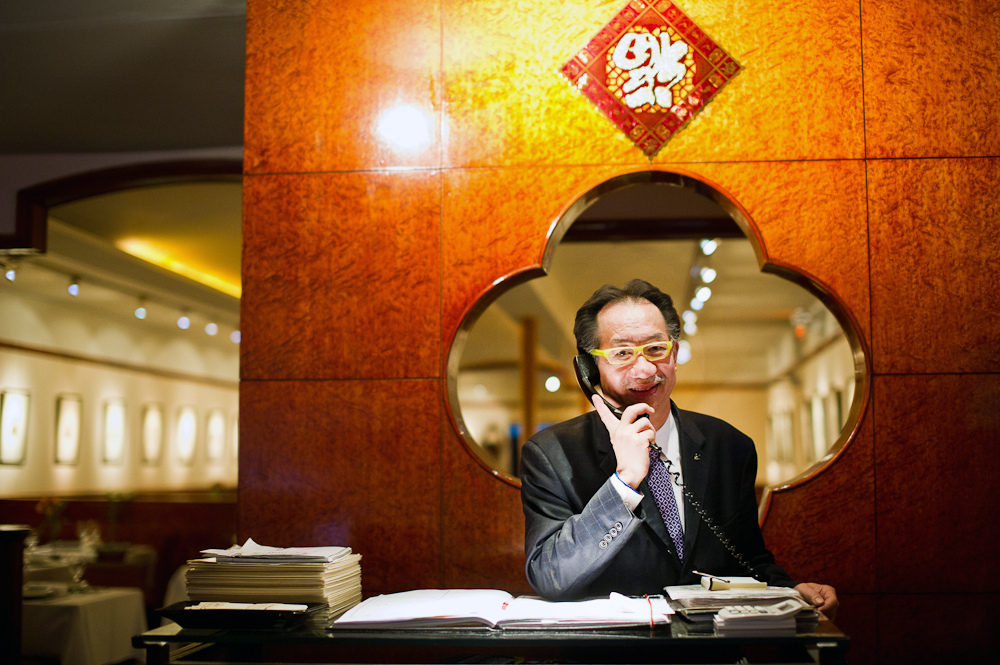 After working in Chinese restaurants since the 60's, starting out at a chop suey joint in Brooklyn, Jimmy Chin finally saved enough to open an upmarket white tableclothed Chinese restaurant of his own in Midtown called Chin Chin in 1987. He installed his family members in the kitchen—Elaine, Robert, and Hin Kuen Chin still run the show there—put his wife on the books, outfitted his servers in tuxes, and opened up, attracting neighborhood folk, finance types, celebs, sports figures, and well to do Chinese food-loving New Yorkers for the next two decades.

Now 61, Chin has survived the restaurant's biggest challenge—the crash of 2008—and continues to work day in, day out at the restaurant's front podium. The secret to his success: he hasn't taken a sick day in 44 years.

You opened this restaurant yourself? Jimmy Chin, owner: I built it myself with my own hands in July 1987. Why this neighborhood? I thought it had all five ingredients for success which are no secret: the five things are lunch, dinner, supper, bar, and takeout. The more of those things that you have, the higher percentage that you're going to make it. If you only have one or two of those things, you're not going to make it. So this place had all five.

And how has the clientele changed since the 80's? The core of the clientele is basically the same. What's changed is Wall Street. Wall Street has changed because a lot of the big companies are gone, Bear Stearns, Lehman Brothers, Solomon, Merill, AIG—all bankrupt. We had a lot of expense account guys entertaining clients. And now there are no expense accounts because there are no jobs. Would you say the biggest change in the restaurant's history came after the crash of 2008? Yes, absolutely. Tourism on the other hand is much stronger. Because the dollar is cheaper. So we're getting Europeans, South Americans, Asians. New York is a bargain now compared to other areas because of the cheap dollar.

What about your Chinese patrons? Do you have a strong following in that community? No, it's small. Most of the Chinese want something less expensive, and they're very ethnic and clannish, so they stay near Chinatown. The younger Chinese prefer to explore and have different cuisine.

You're still here seven nights a week running the place? Yes, I haven't missed a day in 44 years. Not one day? I don't know if I can say that, but in 44 years, I have had not one sick day. I have Sundays off, where I do paperwork and accounting. But other than that, I haven't missed one day's work. You've got to sacrifice. There's a reason why some businesses last two years and some last 32 years, and it's not by accident. Total sacrifice. Have you left New York in the last three decades? I go on vacation once every ten years, the last time was to Barcelona and Madrid.

And you still run Chin Chin with your family? It's a family owned restaurant. My wife takes care of the books and the three main chefs are all family members. Are they the same since opening? From day one. Have their menus evolved at all since the 80's? The basic menu hasn't changed much, but every few years we take out five things and add five new things.

Who is your competition up here? There's Chinatown downtown, but that's a different clientele. In our category, it's probably Shun Lee Palace, Tse Yang, and Mr. Chow's is about it. All the rest are medium level or low level places. Isn't it interesting that most of these places have been around for a long time? There are no new restaurants you see as competition. Most of the newer ones are trendy fashionable places, and they don't have substance. Trendy and fashionable only last a certain amount of time. Substance is what makes a place endure. It's like if you dress a pig up in a beautiful dress, it's not a woman, it's still a pig...All our competitors we know each other. We don't socialize together but we know each other.

Do you ever think of expanding? No. Greed kills. I've watched many of my colleagues open up three or four restaurants hoping to make three or four times the money and what happens is they lose control or they get robbed blind. And you get watered down.

Who are your favorite customers? Regulars? My biggest customer for 27 years, Bernie Madoff, is in jail now. The financial guys are more low key now. Instead of being extravagant, they're watching what they spend. Then we get ball players all the time: Derek Jeter, A-Rod, Robinson Cano, Joe Torre. And after 10 PM we get the rappers, Fabulous, Ludacris, 50 Cent, P Diddy, that crowd.

What would your advice be to restaurateurs for surviving something like this 2008 crash? You have to have clientele that's diversified. If you have to rely on one segment, you'll get crushed. You should have some regulars from the neighborhood, you should have business people, tourists, you should have a wide array. For instance, the Jewish holy days—if your clients are all Jewish, you're dead. The same thing for the business world. If you have all bankers and Wall Street goes down, you lose. Any other advice? For anyone who enters the business, they've got to be prepared to work 80 hours a week, no holidays, no weekends, and no matter how sick you are, suck it up and come to work.