40 years ago, chef Shorty Tang cooked cold sesame noodles at his restaurant Hwa Yuan in Chinatown, and people went crazy. The restaurant closed in the '80s after Shorty died, but the memory of the dish stayed alive thanks in part to an article Sam Sifton wrote for the Times magazine in 2007. After the article was published, Shorty's grandson Gilley did some research on the history of the family recipe. This year, he and his brother brought the noodles back to life at Smorgasburg, the weekly food fest in Brooklyn. Here's the story of the past, present, and future of Shorty Tang's cold sesame noodles, as told by Gilley, his father Jerry, and his brother Casey.

Jerry, do you think your father brought cold sesame noodles to New York? Jerry Tang: Well, more than that, I think he's the first one that revolutionized Sichuan cuisine. Before that it was chop suey — it was half Sichuanese, half Shanghainese. The real thing was the spice and the marinated meats, like a lot of marination overnight. He gave you the best ingredients you could find on the market. He didn't do that to make money, it was his passion. But he created a lot of enemies, because he knocked them out. He knocked them out, period. But they were good enemies, they all knew each other. They still shook hands and they still had dinner. 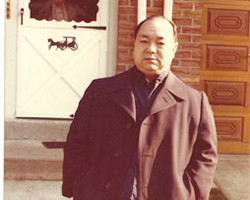 Tell us about Hwa Yuan. JT: At the time, that part of East Broadway was a Jewish neighborhood — a lot of the merchants selling fur coats and hats — and he was the first one there. He had two store fronts. So, Woody Allen came over, Mia Farrow, Letterman, Steve McQueen, and Ali McGraw. Lots of celebrities, but he did not speak English very well. Besides good cooking, he was a good drinker, good smoker, and good at PR. He had a good personality, but also a hot temper. He didn't take no for an answer, but he knocked his dishes out. I was there in the summertime as a dish washer, and when he died in 1974, I took over the business. Elvis also died that year — Elvis, Bruce Lee, and Shorty Tang. After he died, business went sky high. From 11 o'clock until 10 o'clock, non-stop. [Photo via Rice Wine Vinegar]

It sounds like you got some good reviews. JT: Yeah, Arthur Schwartz and Mimi Sheraton. Mimi and I, we don't get along. Arthur's cool with me. Then Sam Sifton came along — Sam's a real guy. Sam knows his business. He came to my house, and he knows his food. In a way, I think he's the best writer I ever met. I was not prepared that time he came over, because I hadn't cooked in a long time. So I said, "When you come again, I will kick it up another notch."

Did Sifton remember the dish? JT: Yeah, he knew every detail. He knew what was in it and not in it. Gilley Tang: I asked him, "Why did you write this article?" And he said, "Well, I love cold sesame noodles, and now you can't find good cold sesame noodles." He contacted Eddie Schoenfeld, and Eddie said, "You need to find Shorty Tang's family." So, when he wrote that article, we were shocked. It was totally out of the blue. I never met my grandfather, I only knew this brief history about the restaurant — I knew it was famous and popular. But to have this man write this article about my grandfather, it was amazing. Casey Tang: There are people talking about the noodles on forums like Chowhound and eGullet — that's the thing that got me interested in my family history. It's in people's memories. People from Hwa Yuan come and eat the noodles now, and it's crazy how they have this emotional response to it. They hug my dad and say, "Hey Jerry, what's going on? I haven't seen you in 20 years."

So, you first brought them back for one night, Chinese New Year, at Court Street Grocers. How did that come about? CT: They opened a new store and asked if we could do the noodles. We gave it to them for free, because they're friends of ours and it was a congratulations sort-of-thing. GT: So, I developed this recipe the best that I could, and I thought, "Let's see what happens." The next thing I know, I get a call saying that 50 people were showing up from all over the world. CT: Yeah, a guy was at Penn Station and heard something about it on the radio and he took a cab all the way to Carroll Gardens. And right now, people form Westchester and Long Island come to Brooklyn just for the noodles.

How did you get involved with Smorgasburg? CT: Well, I live in Fort Greene near the Brooklyn Flea, so I had the idea that it might be a good place to try it out, low cost. GT: I thought we would sell a couple of noodles — I wasn't expecting 80 pounds of noodles a week. It's those loyal customers that come back every week. That's the best part, to build that relationship and reintroduce the dish to people. 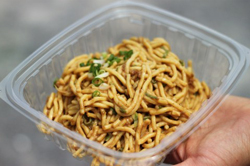 How did you feel about selling the noodles at Smorgasburg, Jerry? JT: I'm from the '60s, man. I'm a hippie. I'm freestyle baby, you know how that goes. I think a lot of it has to do with the connection to the '60s, just reminiscing about Jimi Hendrix and Beatlemania and all that. Food and music, it all goes hand in hand. Because what's a good environment with no food? So, I think it's very, very good. But you gotta thank these guys [points to his sons], because I lost interest. I've been doing this my whole life, but these guys brought it back. [Noodle photo: Guzzle Guzzle]

So what's next for Shorty Tang & Sons? GT: Our initial plan is to bottle the sauce and to mass produce it, to keep that legacy alive. That's always the goal, and then from there?I don't know. Once we get the sauce, bottle it and sell it, then we'll see what happens. If people still want it, maybe we'll find a little space. Nothing crazy, like a storefront. I think that we want a storefront and to make everything organic, serve three or four different items, and go from there. CT: He has all this knowledge — he's a trained chef. He worked at French, Indian, and Italian restaurants. GT: For me, line cooking is tough, and I'm at a point where I just can't do it anymore. But I worked at Locanda Verde, Tabla, and DB Bistro Moderne. It's at a point where this is a great opportunity. It's been positive, and we want to keep that going. CT: We're also talking about doing a pop-up or something. Gilley's working on a menu, stuff like that.

[Gilley and Jerry at Smorgasburg via Facebook; Jerry and Casey at the Dekalb Market Night Bazaar]

GT: Yeah, we want to do a pop-up and see what happens. We met the Mission Chinese Food people and we asked them what they thought. They said, "Just do something crazy, like abnormal. Find a place where people never think they could get Chinese American food." There's a movement for that. People like myself, second generation, there's a movement that we can relate to. It's Chinese-American food at this point.

Jerry, how do you think New York Chinese food has changed over the last 40 years? JT: Oh, it's gone downhill. I can't name names, but I know who's messing up and I know who started it. One thing about young people now is that they're very educated, maybe because of the cyber age, the internet. They're more educated than the old customers. They appreciate good food if you have good food. You can't tiptoe around it, they know what is good and what is not good. Good food is here to stay, period.

Note: Shorty Tang & Sons will be at Smorgasburg this Saturday.