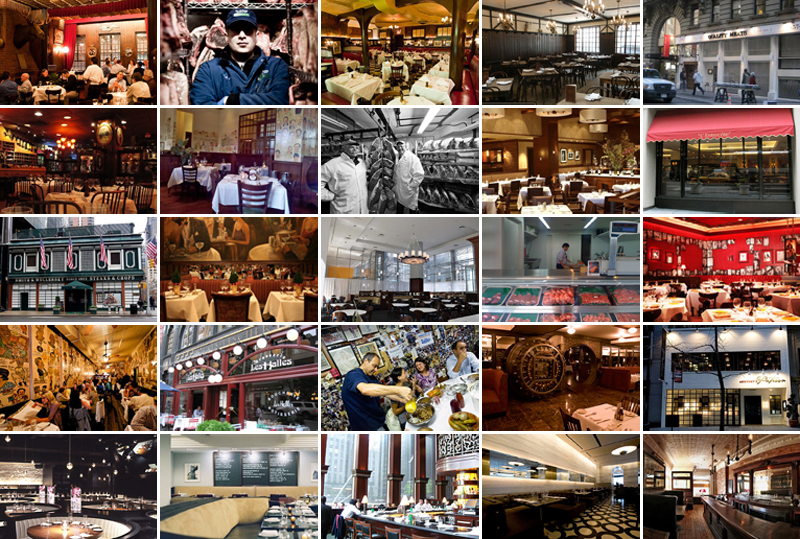 New York is one of the best cities in the world for steak, but there are a lot of chophouses out there, and not all of them are good. Here's a handy guide to eating beef in New York City, full of the most essential info about the big players, the different styles, the steakhouses to avoid, and the ones to seek out, in glossary form.

Click on each restaurant name for more info. For more on the individual cuts, refer to this chart.

Aretsky's Patroon: Some people say that the food at this clubby Midtown steakhouse has gone downhill over the years, but at least you can still find legendary host Ken Aretsky working the room most nights. On a recent visit, Sam Sifton loved the porterhouse for two.

BLT Steak: BLT Steak serves about ten fine pieces of beef from Debragga — including three cuts of American wagyu steak — as well as fish and poultry dishes, market-driven sauces and sides, and freshly baked popovers to start. This is a good steakhouse to go to if one or two of your dining companions don't want to eat beef.

Bobby Van's: Bobby Van's is a fine place for sirloin steaks and red wine, and some bloggers rave about the lunchtime burger. Five Manhattan locations to serve you.

Chateaubriand: One of the most tender pieces of beef, cut from the large end of the tenderloin. A steak for two.

Cote de Boeuf: A large rib steak that is typically dry-aged, then pan-seared and roasted. Another steak for two.

Debragga: One of the top beef purveyors in the NYC area. Co-owned by Marc Sarrazin and George Faison, Debragga recently left its 60-year home in the Meatpacking District for a new facility in New Jersey.

Del Frisco's Double Eagle Steakhouse: One of the highest-grossing steakhouses in the country, and according to critic Ryan Sutton, one of the worst.

Delmonico's: Delmonico's is widely regarded as the restaurant that changed New York dining forever (it has existed in one form or another for 184 years). There are some clunkers on the menu now, but the famed lobster Newburg and Delmonico's steak are still solid.

Dry-Aging: A process by which sides of beef or large individual cuts are hung in a room that keeps them at a near-freezing temperature for 15 - 28 days or longer. Dry-aging evaporates moisture from the muscle, which releases flavor, and it also helps break down the connective tissue, making the meat more tender. Generally, only premium cuts of beef with high fat content are dry-aged, because the space is expensive and about 15% of the weight is lost in the aging process.

Filet Mignon: One of the most tender — and expensive — pieces of beef, cut from the small end of the tenderloin.

Hanger Steak: A moderately-priced steak, cut from the diaphragm. Flavorful, but sinewey. For maximum tenderness, only order this rare or medium rare.

Hunts Point Meat Market: The South Bronx co-op that is home to Master Purveyors, the company that supplies beef to Peter Luger, Keens, and Wolfgang's, among others.

Japanese Premium Beef: This Noho butcher shop supplies American wagyu beef to a handful of the city's top restaurants. You can also purchase steaks and ground beef here to cook at home, and the back of the space houses one of New York's most infamous "secret" restaurants, Bohemian.

Keens: Keens is one of New York's very best steakhouses. The famous dish here is the massive, extremely flavorful mutton chop (which is actually a saddle of lamb), but the menu also has several cuts of beef that are dry-aged on-site and expertly prepared. If you ask, a host will be happy to give you a tour of the sprawling space, which features an astonishing collection of historical artifacts and memorabilia from the restaurant's 120 years in business. Head to the adjacent pub for half-sized chops and full-sized sandwiches.

Le Relais de Venise L’Entrecote: This European import offers a great deal: for $26, you get a strip steak with fries and a salad with a second helping of the meat and potatoes, if you like. Le Relais de Venise does not use top-quality beef, but the meat that they do serve is tender and flavorful enough, and every steak comes with an addictive chicken-liver sauce on the side.

Les Halles: A small steakhouse chain with a big name "chef-at-large": Anthony Bourdain. The quality has dropped off over the years, but the Park Avenue location is generally considered to be better than the one in the Financial District.

Minetta Tavern: After two and a half years, Minetta is still one of the hottest restaurants in New York, and that's not just because of the beautiful dining room and sexy scene. Chefs Riad Nasr and Lee Hanson are serving up beautiful cuts of Creekstone Farms beef, which are dry-aged by star purveyor Pat LaFrieda and cooked on a high temperature broiler that gives just the right amount of char. The entire menu is solid, but get the New York strip or the côte de boeuf for two.

Old Homestead Steakhouse : A Meatpacking District legend that is now a tourist trap. There are many premium steaks to choose from, but they are not always perfectly cooked. These days, Old Homestead is the reigning king of corny restaurant promotions.

Palm: This family-owned steakhouse is still wildly popular after 85 years in business. Esquire's John Mariani considers the New York strip here to be one of the two best steaks in the country (the other is the Luger porterhouse). Palm is a good choice if you a want a steak dinner on the spur of the moment, as one location should be able to seat you without a reservation if you're in a small party.

Peter Luger: New York's most famous steakhouse. In terms of atmosphere, service, and even cuisine, Peter Luger is not for everyone. But, if you want to experience the richness, supremely tender texture, and strong mineral notes of expertly aged beef, this is the place to go. Order the porterhouse (for two, three, or four), which is presented in a pool of melted butter and blood, and served tableside so that each guest gets slices of the top loin and tenderloin. Note: As a general rule, it's best to call six to eight weeks in advance for a reservation, but it's considerably easier to get a table at lunch, and you can sometimes make a reservation with just a few weeks notice if you talk to a host in person.

Porter House: The steakhouse in the Time Warner Center from former Windows on the World chef Michael Lomonaco. The restaurant serves several premium steaks, but also "porterhouse" cuts of other meats like lamb and duck. Skip those and head straight for the chili-rubbed ribeye, which is aged for 45 days.

Porterhouse: A tender T-bone steak with a piece of top loin and a large portion of tenderloin.

Primehouse: Steve Hanson's slick Park Avenue steakhouse. The restaurant has a somewhat absurd concept: every piece of meat is from a cow that was fathered by one mighty, genetically superior bull named Prime, who lives on a farm in Kentucky. Primehouse serves ribeyes that are aged 28, 40, and 65 days, but the hanger steak with chimichurri is also great and something of a deal at only $26.

Prime Meats: You can eat a fine Debragga cote de boeuf at this Carroll Gardens restaurant, and a very good dry-aged strip steak. But, the thing that makes Prime Meats a great modern steakhouse are the starters, salads, sides, and charcuterie program.

Prime Rib: A large, flavorful cut from the rib section of the cow, prepared by slow-roasting with dry heat.

Quality Meats: A modern steakhouse owned by the Stillman family (who also own Smith & Wollensky NYC, among other restaurants). These days, it's more famous for its AvroKo-designed dining room and creative desserts than for its steaks. But, you can't go wrong with the 64-ounce double rib steak, which is carved tableside.

Ribeye: Cut from the rib section of the cow, the ribeye has good marbling and a lot of flavor. Only order this rare, medium-rare, or medium.

Sammy's Roumanian: People love celebrating birthdays at this kooky Lower East Side classic, and there are a few fine dishes on the menu. No visit is complete without the chicken liver appetizer, and an order of their massive Romanian tenderloin, which is a strip steak smothered in garlic.

Sirloin: A steak cut from the top back part of the animal that's great when broiled, grilled, or cooked in a pan.

Smith & Wollensky A classic Midtown steakhouse with a massive, high-tech aging room, and about ten different cuts of beef on the menu. A good choice if you want surf and turf or prime rib.

STK: The girly MePa steakhouse from The One Group, where steaks are listed on the menu like T-shirts: small, medium, or large. It's not one of the city's best steakhouses, but the dry-aged steaks are better than what you'll find at most other club restaurants.

Strip/NY Strip/Shell Steak: A tender cut of the top loin, with or without the bone. When it has a bone and a piece of tenderloin, it's a T-bone or a porterhouse, depending on the size of the tenderloin. A boneless top loin steak is a shell steak.

Sparks: Some people like this Midtown steakhouse, especially because of its strip steak, but others (like Alan Richman) complain about inconsistency. Sparks will always be remembered for a mob hit that happened just outside the restaurant in 1985, when two Gambino Family associates were murdered by one of John Gotti's henchmen.

Strip House: One of the best steakhouses in downtown New York. For entrees, get the strip steak or the ribeye; for sides, try the goose fat potatoes and the onion rings. Strip House was recently acquired by BR Guest overlord Steve Hanson. Hopefully he won't fuss too much with the menu, or the burlesque-themed interior, which was designed by David Rockwell.

T-Bone: A bone-in steak with meat from two of the most prized cuts, the top loin and the tenderloin.

Wolfgang's: A Midtown steakhouse owned by a former head waiter at Peter Luger, Wolfgang Zwiener. He basically recreated the Luger set-up here, with a dry-aging box where steaks sit for weeks, and a high-heat broiler that gives the meat that deep char on the outside. Unlike Peter Luger, Wolfgang's serves lamb and a number of seafood dishes, and they also have an extensive wine list, Also: they take credit cards.

All Editions of A Snob's Guide [~ENY~]