Spanish Wine Flashes Its Many Sides At Tertulia

Share All sharing options for: Spanish Wine Flashes Its Many Sides At Tertulia 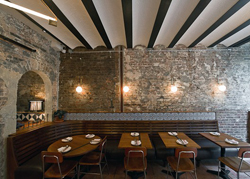 There is no shortage of Spanish restaurants in New York, but there are few with wine lists that manage to capture just how much there is to love about Spanish wine. Tertulia is one of them; it’s the Cliff’s Notes to Casa Mono’s canon.

The list, assembled by former Boqueria sommelier Gil Avital, is a fine introduction to the diverse regions of Spain. Avital, knowing well that this country is often the Achilles' Heel of consumers, has organized the list into categories like “Bright & Crisp” and “Dark & Robust” with breaks to highlight Albariño, Verdejo, and Rioja. It’s about as user friendly as Spain gets.

The list strays from the motherland at the back to highlight regions like Languedoc, Roussillon and Sardegna that have swapped influence with Spain throughout history. It’s clever and well selected.

Back at the front you’ll find a short list of sherry up top, with a stern promise from Avital that it will only expand. If you are going by the glass this is where the value is. Spring for a hefty pour of the nearly-dry, briny Colosía Sangre Y Trabajadero Oloroso at $11 or a short glass of Manzanilla No. 22 from Equipo Navazos at $16 which, I promise, is more of a deal that it might seem.

If you’re looking for something on the softer side, the gloriously funky Trabanco cider from Asturias is available on tap for a nominal fee. Unfortunately, the by-the-glass program falters a bit with the red, white, and sparkling selections: they are interesting and rotate frequently, but the pours are short and the pricing is not.

In these categories, head to the straight to bottle list instead. Here you’ll find a down-to-earth mix of quirky wines from Asturias, the Canary Islands, and Basque Country coupled with more modern, recognizable wines from Priorat and Ribera del Duero. The list's strength lies is in the way it combines these different sides of Spain—deftly striking a balance between modern heft and old school restraint. By showcasing both, Tertulia's list succeeds in proving how stylistically diverse Spain is — a fact that some of the country’s most visible wines might have us forget.

Bang For Your Buck
Gutiérez-Colosía Oloroso “Sangre Y Trabajadero” Puerto de Santa Maria $42 (375ml)
This is definitely on the lighter side of the Oloroso spectrum, wearing just a tinge of sweetness and countering its richness with great acid and salinity. Great by the glass, but not to be feared as a potential meal partner particularly if paella is part of the picture.

Adegas Cachín Peza do Rei Blanco 2009 Ribeira Sacra $48
Sourced from eight family-owned acres in the far northwest corner of Ribeira Sacra this is a field blend of treixadura, godello, albariño that’s as dense as it is bright. Great introduction to the many charms of Galician white wine that combines the acidity of albariño with the ripe citrus aromatics and creaminess of godello.

Bermejos “Diego Secco” 2010 Lanzarote $54
The Canary Islands—Spain’s archipelago off the coast of northern Africa—can trace their winemaking history back to the 15th century, but have only recently regained a presence in the international market. The vines are planted in sci-fi craters in black volcanic ash to protect the vines from apocalyptic winds. Diego is an obscure white grape indigenous to the islands that produces a rich, briny wine that’s a versatile meal mate.

Monasterio de Corias 2007 Asturias $50
This is a relatively new estate out of Asturias, a small region to the east of Galicia that’s home to less than 10 wineries (it’s better known for cider than wine). Monasterio de Corias is a small, family-owned winery that's all about traditional winemaking applied to indigenous varieties. This is a blend of mencia--the star grape of nearby Bierzo and Ribeira Sacra--and carrasquin and verdejo negro, two obscure varieties native to Asturias. Bright, aromatic, unique.

Monje “Tradicional” 2008 Tacorante-Acenejo (Tenerife) $50
Another wonderful wine from the Canary Islands, this one a blend of listán negro, Nnegramoll, and listán blanco from the island of Tenerife. Fermented with native yeast and aged in old American oak casks, this is all violets and pepper with just a touch of grit.

Primitivo Quiles “Raspay” 2005 Alicante $54
Classic Alicante: sourced from low-yielding Monastrell (Mourvèdre in French) vines and vinified in old oak barrels for a prolonged period of time. The 2005 release is bright and earthy.

Crowd Pleaser
Gramona “Gessamí” Blanco 2010 Penedès $48
A wonderfully sharp and floral still white from Penedes (Cava’s home base) made from two strains of Muscat, plus a little Sauv Blanc and Gewurztraminer. Fresh like Prince of Bel Air.

Under $40
There are only a couple of wines under $40 and the cheap and cheerful Muga Rosado from 2010 is the best bet no matter the season.

Off The Beaten Track
Niepoort-Navazos Blanco 2009 Jerez de la Frontera $74
The new project of Dirk Niepoort (of port wine fame) and Equipo Navazos, hunters of unique and rare sherry that have quickly made a name for themselves by introducing the world to some of the most interesting wines out of Jerez and Sanlúcar. Together they have launched this project in the hopes of producing a wine that harkens back to the early 1800s, when fortification of sherry was uncommon for local consumption. This is palomino fino sourced from historic vineyards, that spends 8 to 9 months under flor (fino spends a minimum of 3 years). It shows all of the brininess we’ve come to associate with fino, with a bit more fruit character.

Flor del Páramo 2010 Castilla y León $40
Prieto picudo is an ancient variety that – with less than 100 hectares under cultivation – is nearing extinction. Flor del Páramo’s winemaker has sought to keep the grape alive via this bottling of wild, aromatic and amply-colored rosado.

Break The Bank
Guímaro B2M 2008 Ribeira Sacra $78
Guimaro is easily one of the best producers out of Ribeira Sacra who’s dedicated to upholding the traditions of the region and its grapes. A field blend of old-vine mencia with small amounts of caiño, that’s raised in used barrels. Big, concentrated, and mineral-driven.

López de Heredia “Tondonia” Gran Reservan 1991 Rioja Alta $168
Great pricing on this bottling from the master of traditional Rioja. All hippie funk, lean red fruit, and mineral. Still has miles, but will show well right out of the gate.

WTF?
Marqués de Griñon 2004 Syrah Dominio de Valdepusa $86
In the world of Spanish red wine there is big and then there is the pointlessly gargantuan. The latter is on display here with this dolled up Syrah that sacrifices character for size. If you’re looking for a hefty red wine there are a number of selections that offer weight sans all the blue eyeshadow, like the Perez Pascuas “Viña Pedrosa” from Ribera del Duero at $57. Go there instead.