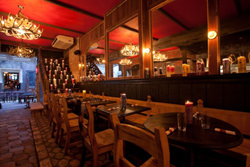 Monday night's Community Board Meeting 3 was a long and contentious affair that, as usual, brought out strong emotions not only in the applicants but also the board members and people in attendance. There were a few no-shows, also a few that left when they realized three hours in that not even half the docket had yet been covered. The excitement of the evening centered around Diablo Royale and somehow the CB3 meeting turned into something analogous of a courtroom brawl. At one point, one of the community board members referred to Jason Hennings, the owner of Diablo Royale, as the defendant. Here, a summary of what went down:

1) The guys from Cienfuegos (on Avenue A and East 6th Street) were at the meeting hoping to change their current operation. They want to keep the upstairs restaurant the same but downstairs they want to run an English fish and chips restaurant. They were approved and are keeping within the same method of operation and hours of use. It will now be called Gin Palace, focusing on gin cocktails and old style English pub fare featuring a selective fish’n’chips menu.

2) The most exciting and heated discussion of the night centered around the license renewal of restaurant Diablo Royale (167 Avenue A) that has a long complaint history. Andrew Coamey, spearheaded the fight against Diablo Royale, complaining about the noise and clientele and and saying it's solely an alcohol fueled establishment. Coamey, a frequent attendee of these meetings and a neighborhood activist, helped bring in thirteen other neighbors to speak against Diablo Royale. He handed out large packets to the board that included photos and written statements detailing how detrimental Diablo is to the community. Seven people stood up and spoke against Diablo Royale having its license renewed. Jason Hennings, the owner, fired back against his neighbors, saying their allegations were lies and that Coamey was just out to get him. It was noted that these are pending SLA violations against Diablo that have yet to be verified. Hennings, the East Village residents, and even some board members were all involved in an angry discussion over the situation. The board stepped in a denied the renewal of the Diablo’s liquor license after a hours worth of debate.

3) The Bean was hoping to garner a wine and beer license for two of their East Village locations but were only able to get approval for one. The Bean location at 54 2nd Avenue, which is currently under construction, was successful in obtaining a beer and wine license. The other location (147 1st Ave.) is in an area that is already well saturated with places serving beer, wine and liquor.

4) The team of four gentleman behind Alchemy Consulting is taking over the spot that housed White Noise (225 Avenue B). This spot was called Pouring Ribbons on the agenda. The group said they will not be using promoters or DJ’s in the space. They will also be hiring a sound engineer in order to make sure neighbors and the area will not be disturbed. They asked to change their closing time from 4am to 2am, citing they want to be a low key lounge and that they don’t want any added liabilities that come with drunk clientele.The board approved their liquor license.

5) The restaurant Peel’s was approved for their request to add an additional standup bar.

6) There was also a renewal with a complaint history for The Porch (115 Avenue C), which voluntarily closed six weeks ago after chronic noise problems. The owner came forward to say they are now under new management and will become more of a restaurant, in effect changing the current method of operation. They have brought in a chef with twenty-five years of experience, also, a well established restaurant management group. The Board told him to come back with a new application because they cannot approve now for the following reasons; 1. The applicant concedes voluntary closure after chronic noise complaints and police activity. 2. The most recent violation was as recent as September 2011. 3. Business currently closed and has been for six weeks. 4. License is in safe keeping. 5. Plans to reopen but in complete reorder of operation and method of business but have no more details than that.

8) Thai restaurant Cafetasia (85 Avenue A) is looking to expand on their beer and wine offerings with a liquor license. The owner showed up with her husband, a lawyer, and another lawyer seeking to get a liquor license in order to meet their clients' desire to have a cocktail with their meal. The owner is part of a restaurant group that operates eleven other businesses in the New York area. The owner was also able to provide a letter of recommendation from another community board. It was brought to the community board's attention that the restaurant had a sign outside at night promoting a 100 ounce beer and some board members felt this went against the primary function of the restaurant, which is food. The board also cited the abundance of establishments already in the area with full liquor license and therefor denied Cafetasia one.

9) The owner of Essbar (102 Avenue C), an Austrian restaurant, was hoping to enhance the dining experience for its customers by being able to serve a bloody mary with their brunch service. The restaurant had three East Village residents come speak on its behalf, they said it is a superb edition to the neighborhood and only wish liquor could be provided to compliment their meals. The board was quick to approve the liquor license for this establishment.

10) Korean Restaurant and Karaoke Lounge 6 St. Marks sought a wine and beer license last night for their establishment. A little debate ensued about when they need to stop serving but an agreement was reached. When approved, it was stipulated that they will stop serving drinks at 1am Sunday-Thursday and 2am Friday and Saturday.

11) Alphabet City Beer Co. was approved to serve beer at their establishment, as long as they do not seat in their backyard garden or serve beer there.