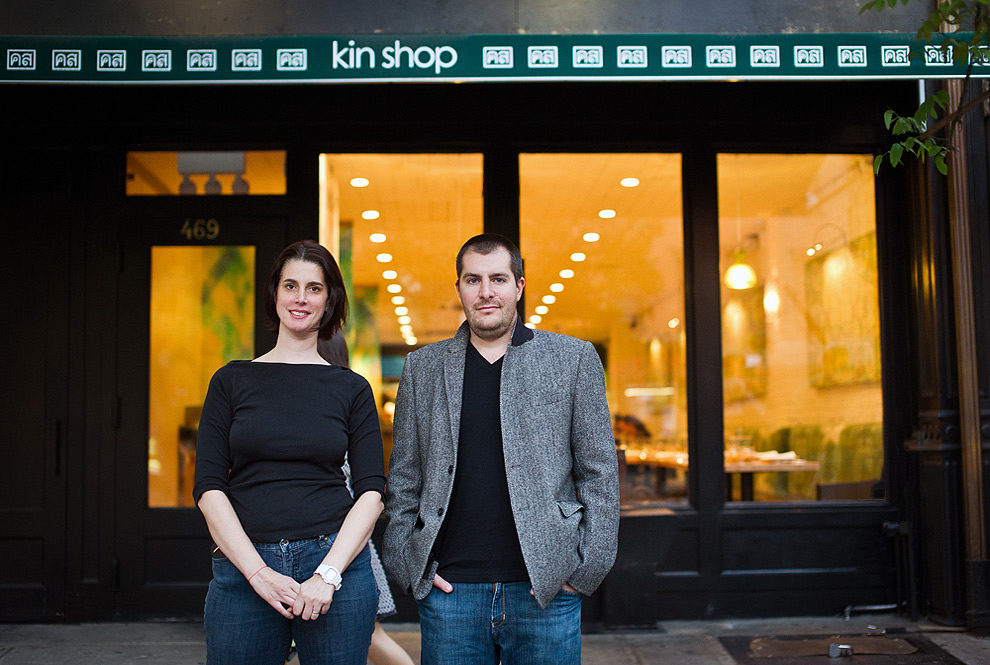 Kin Shop is the year-old, critically-acclaimed West Village Thai restaurant from chef Harold Dieterle and restaurateur Alicia Nosenzo. Although the cuisine is totally different, Kin Shop has the same relaxed neighborhood vibe, moderate price point, and casual-but-attentive service as their first project, Perilla. Now the duo are gearing up for the opening of their third restaurant together, The Marrow. We recently chatted with Harold and Alicia about year one of Kin Shop, and what they've got planned for the future.

When was the first time you talked about doing something like this? Harold Dieterle, Chef and Co-Owner: It was probably before I went back to Thailand for the second time. In 2008, we were talking about doing a wine bar slash sandwich shop. We were starting to raise money, and the economy tanked. I went on that trip and said, "I don't think I want to do that anymore, I want to do a Thai restaurant. "

Alicia, were you surprised when he said he wanted to do Thai food? Alicia Nosenzo, Co-Owner: No, he's always loved Thai food, and there's been a lot of that influence in his food at Perilla, so it wasn't surprising. I have a lot of faith in his food.

Was it hard to fit that idea into the parameters of how you guys do business? HD: Well, the one thing that I've learned from working with Alicia is that it doesn't matter the style of restaurant or the price point — the service is always going to be amazing. That's what she does, so it doesn't matter. AN: I think that one thing that's a common thread for us is that we always want to open restaurants that we want to be in, and I think that we want to be in places where people are friendly and knowledgeable and know what they're doing.

How was the build? HD: Quick. The restaurant that we took over was literally only a year old. AN: We did have to change up a lot of the kitchen, but we worked with the blueprint of the restaurant, and we tried to recycle as much as we could in terms of what was in the space and how we could reuse it. We tried to make it a quick turn around, that was really important for us. Both Perilla and Kin Shop were fall openings.

Was that a financial decision, to turn it around fast and open in the fall? HD: Yeah, I think so. I mean, Perilla was very successful from a financial standpoint, but it was still very hard to raise money. Especially in these economic times, it's always a challenge to raise money. I don't want to say that it was an off-the-wall idea, but getting people to believe in us opening a Thai restaurant was a little challenging.

What was the menu testing process like? HD: It pretty much happened in my apartment. Some of the dishes had so much detail and used so many ingredients. When I'm cooking, I tend to take up a lot more space than a normal cook. I guess I'm bossy or something, I don't know. I get a little territorial when people start putting stuff in my station, so I found it much more productive to just do the testing at home. And to some degree, you don't want the cooks to see all your failures. There were probably a couple of dishes that really weren't successful, and I wasn't ready for them to see their boss come up with all those failures. So, I thought it was more productive on a lot of different levels just to do it from home.

Did you have to find new purveyors to do this kind of cuisine? HD: Yeah, I mean, we use some people I was working with over at Perilla, but we got some new ones. The tricky thing was sourcing the herbs and a few other things. I don't really do any noodle dishes at Perilla, so that was a little challenging.

How was the opening? Did people show up? HD: Honestly, it's an interesting thing. When we first opened Perilla, it was a bloodbath right from the get-go. Here, it took a little while to amp up. I think the reviews really drove it, because we decided to do the opening on a little bit of a smaller scale and keep it a little quieter. I think that it was very moderately paced for probably the first two weeks. AN: I think that opening weekend is always hard. We tried to go for a quiet opening to give ourselves a little bit of time to get the feel for the space, and to see what kinds of problems we might have. But I think the more openings you do, the more attention you get, and the more you're like, "We're ready. I think we're ready to go."

Did you have to make any changes after the first month? HD: Constantly. We were having a tough time with the duck laab, especially because I didn't want to tone down the dish because it was supposed to be spicy. AN: We had a guest in the first few weeks who sat at the bar and asked the bartender about it, and he said, "It's really spicy." And she asked, "Out of one to ten, how spicy is it?" And he said, "Nine." So, she ordered it, and she was like, "It's too spicy." HD: In the beginning, one out of every six orders was getting sent back for being too spicy. I was pulling my hair out! It was like, "What are we going to do — are we going to comp all this food?" Probably the toughest thing is finding the happy medium on the spice level of the dishes. It's so subjective. Everyone has a different tolerance. AN: Now there are four stars on the menu next to the spiciest dishes, that seems to have helped quite a bit.

Did the orders change after the Sam Sifton review? HD: Totally. The squid ink soup, we would sell two or three a night, and the it was like, "We sold how many?" It was crazy. It just shows the influence that a review shout-out can have. AN: The night that the review came out, the first ten tables ordered it. It's a very particular flavor, and it's really not for everybody.

Over the last year, you guys introduced lunch, and began to offer a lot of different specials. Did you find a groove at a certain point that allowed you to expand in that way? HD: Yeah, it's taken a lot to get the base recipes on the dinner menu where they are, and I have young cooks in the kitchen too, so you need to keep the cooks motivated and challenged as well. So, it's a challenge for everybody. It's offering dishes to the regulars, hearing that they want to try something new, and keeping everyone motivated.

And now you're working on your third restaurant, where you're tackling a different cuisine and a different neighborhood. It sounds like you have a big capacity for opening and running restaurants. AN: I think that's because we really love to build relationships with people we work with. And as you kind of build these relationships, you don't want to let go of these great people. But, it's such a challenge to be creating new and exciting things while still having that hands-on experience in the restaurant.

When did you start talking about The Marrow? HD: May? AN: Actually, I had my baby shower. HD: [Laughs] I blindsided her. AN: He came over to my house for the bris, and said, "I know you just had a baby, but can you go see this hotel space on Tuesday?" I was like, "Are you joking? Are you kidding me?" And I went, and it's just like a really great opportunity. The guys that own the hotel are awesome and we're really excited — and I live in Brooklyn. There's a lot of great restaurants in Cobble Hill and on Smith Street and that whole area, but right within the vicinity of Downtown, there are not a lot of restaurants. Brooklyn Fare is great, but it's so tiny and it's such a particular experience.

Harold, do you live in Brooklyn? HD: No. I live near Kin Shop. So, I'm looking forward to when we have a water flood or something and they call her first. I live right around the corner, so I'm the on-call emergency guy.

Have you started recipe testing for The Marrow? HD: Yeah, I've started doing some testing, and I'm very excited.

When can we expect The Marrow to open? HD: Probably sometime in the winter. So, early 2012.

What are your favorite things to eat at Kin Shop right now? HD: I really enjoy the mushroom noodles, and we have a vegetable dish that's simmered rice noodles with stir fried beans. AN: And I love the pork dumplings.