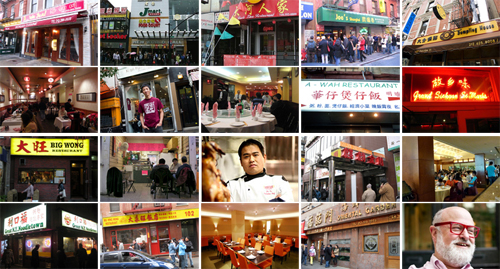 There are a lot of Chinese restaurants in New York — you could spend years just trying to sample the good ones. But, if you don't want to look like a dope around your food nerd friends, there are a few basic restaurants, dishes, chefs, and restaurateurs that you need to know about. Here now, a Snob's Guide to New York Chinese food, in glossary form.

A-Wah: A popular Hong Kong-style restaurant near Confucius Square specializing in bo zai fan, or "clay pot rice." Get the sausage and minced pork over rice.

Big Wong King: Solid roasted meats on Mott Street. A great choice for lunch if you have jury duty nearby.

Cantonese: One of the eight culinary traditions of China. Cantonese cuisine consists of fresh seafood, soups, and all kinds of meat with the exception of lamb and goat. Staple ingredients include oyster sauce and sweet potatoes; representative dishes include sweet and sour pork.

Great N.Y. Noodletown: The best late night eats in Manhattan's Chinatown. This Cantonese restaurant attracts chefs, cops, partygoers — pretty much everybody. Get any of the pan fried noodles or order one of the salt baked seafood dishes.

Golden Shopping Mall: A Flushing mall with a basement that is home to several solid Chinese restaurant stalls, including the first location of Xi'an Famous Foods. You can find English menus at most of the counters.

Henanese: A regional cuisine, similar to Sichuan-style, that is relatively new to NYC. The hot dish of the moment is da pan ji or "big tray of chicken," submerged in a spicy pepper sauce, frequently served over potatoes. Get this at Henan Feng Wei and Uncle Zhou in Flushing, or Henan Flavor in Manhattan's Chinatown.

Hunan: One of the eight culinary traditions of China. Although it is spicy like Sichuan cuisine, Hunan food is much oilier and makes particular use of smoking and curing processes. Trademark dishes include crispy duck and spicy frog's legs.

Joe Ng: Often referred to as one of the best (if not the best) dim sum chefs in NYC, Ng's creations are currently served at Chinatown Brasserie and his hot new restaurant Red Farm. Joe was first discovered by Ed Schoenfeld when he was working at World Tong in Bensonhurst.

Joe's Shanghai: Serves the most famous soup dumplings in New York. A good place to bring out-of-towners, but head to the Downtown or Flushing locations as opposed to the one in Midtown.

New World Mall: Opened earlier this year, this Flushing shopping center has a huge basement level food court serving all manner of cheap Chinese delicacies. A few floors up is the Grand, an elegant sit-down establishment that seats over a thousand guests.

Nice Green Bo Restaurant: A spectacular Chinatown "hole in the wall" praised for its scallion pancakes and crispy eel.

Nom Wah Tea Parlor: One of the oldest restaurant in Chinatown, the recently revamped Nom Wah — which had offered a limited menu featuring such traditional items as lo mein and taro root dumplings — is now praised for its oversized pork buns and scallion pancakes.

Oriental Garden: An excellent restaurant in Manhattan's Chinatown that is particularly popular with chefs. The seafood specialties are the real star items here, but the dim sum is surprisingly good, too.

Pacificana: The Cantonese gem of Brooklyn. Very good dim sum, excellent fish dishes. If it's in season and you have a big appetite, get the king crab.

Peking Duck House: This upscale Chinese restaurant (with locations in Midtown and Chinatown) uses a sophisticated process to tenderize its duck, served with the customer's choice of “house-made pancakes, green scallions, or fresh cucumbers.” Some have criticized Peking for catering to American and tourist taste buds; others just care more about its delicious duck.

Ping's: A Cantonese restaurant with locations in both Queens and Manhattan serving fresh seafood and dim sum made with exotic ingredients such as braised duck tongue and jellyfish.

Sichuan: One of the eight culinary traditions of China. Sichuan cuisine is spicy and bold; common ingredients include peanuts, sesame paste, peppercorn, garlic and ginger.

Shun Lee: Some call the restaurant that “brought upscale Chinese dining to New York” an overpriced and underwhelming establishment; others deem it a verifiable haven for the best Chinese food in the city.

Uncle Zhou: This well-received new Henanese restaurant in Elmhurst has received some notoriety recently for its knife-shave noodles. Also, the "big tray of chicken" in a fiery chili and garlic sauce, with potatoes.

Wa Jeal: Arguably one of the best new Chinese restaurant in the city, Wa Jeal dishes out super-fresh but reasonably-priced Sichuan cuisine of all flavors.

Wo Hop: Greasy, but great. Wo Hop serves classics like egg foo young and chow mein. Be forewarned: there's always a line.