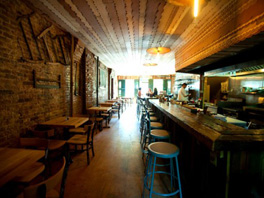 St. Anselm’s wine list takes fashion risks. It mismatches its socks, pairs hats that would put Blossom to shame with oversized dress shirts, pulls a tutu over all of it, and sees no reason why they all don't go together. This sort of dress up party approach to a wine list naturally breeds both adoration and curiosity in equal measure.

The list comes courtesy of owner Joe Carroll who—if you look next door to Spuyten Duyvil and across the street at Fette Sau—might easily be pegged as a beer and bourbon guy. Turns out he’s harbored and cultivated an interest in wine since college and he opened his beer bar, Spuyten Duyvil, with the intention of eventually writing a wine list to rival that collection. The new iteration of St. Anselm has finally provided him with the opportunity.

What he’s given us in return is a steak house wine list for the suitless set, with mark-ups to suit the shirtless. It’s a list that embraces an unlikely love for both esoterica (in its charming collection of well-priced orange wines) and unabashedly souped-up California wine. In many ways it reads like a beer lovers wine collection, one that sees no reason why you can’t love Cantillon's Gueuze as much as, say, Dogfish Head’s 120 Minute IPA. Likewise Carroll sees no reason why non-interventionist orange wines and new wave California cabernet—which are effectively the striped socks and checkered shorts of wine—have to be in divergent camps that can’t co-exist.

It’s an admirable assertion considering that stylistically wine people tend to be far more prone to partisanship than beer folk. But the problem here is that the wine list as a whole might be bi-partisan, but the individual sections are not. For example, if you want to drink red wine you’re more or less left with two options: California or Chateauneuf-du-Pape. Within the former category there is some stylistic diversity with the inclusion of producers like Scholium Project and Sean Thackery, but most of the wines fall into the small-producer-of-very-big-wines camp with the likes of Erna Schein and Jelly Roll.

There are several exceptions, but, in general, if you prefer to drink lean look to the extensive half bottle collection, which has a bit more variety in the red department. Or go forth and boldly challenge the red wine with steak theory.

The short list of grower Champagne, all priced below $100, have been chosen to provide enough girth and structure to pair with literally anything on the menu. Yes, steak and Champagne. Hold on to your hats.

Further in you’ll find a spirited collection of skin-contact white wines, priced to inspire adventure. Half of these wines are at or under $50 (including Movia’s Ribolla, Damijan’s Kaplja, and Monastero Suore Cistercensi’s Rusticum), an increasingly rare sighting now that the category of ‘orange’ has begun to emerge from the underworld, bringing prices up with it. For Carroll the category remains a tough sell, but he’s determined to keep the gateway open by pouring wines like 2005 Kaplja at a very generous $10 per glass.

Vin Jaune, a fringe wine from the Jura that is, more or less, France’s answer to sherry also gets a rare bit of publicity. Here you can have a glass of 2000 Vin Jaune from both Jacques Puffeney and Tissot for $16 and $15 per glass, respectively.

Overall there is a lot to love about this list. It’s one of the most value-driven in the city and there is enough here to make it a place to return, for weeks at a time, simply to drink. Carroll’s preferences are in plain view and he’s put together a list that is uniquely his, flawed or not. With a little more bi-partisanship in the reds section it’s a list that can easily become Williamsburg’s most destination worthy.

Bang For Your Buck
Fleury Champagne Carte Rouge Brut N.V. $43 (375ml)
This is beautiful Blanc de Noir Champagne out of the oft-overlooked Aube region of Champagne, not far from Chablis. This is rich and expressive, nutty and full of fruit, but enough focus and structure on the palate to stand up to meat. Given the CA-cab dominant reds section, I’d opt for this to stand with a main course.

Drappier Brut Nature Zero Dosage N.V. $54
Another great buy from a larger producer out of Aube. It’s 100% pinot noir and sees no addition of sulfur. Champagnes with zero dosage (no sugar added) can often be a bit austere in their youth, but this remains open for business with plenty of pinot-y red fruit. A great buy at $54 and another wine that can stand up to much of the menu.

Selbach-Oster Wehlener Sonnenuhr Riesling Kabinett 2007 $42
If you’re staying on the lighter side of the menu here this is a great option on a great Riesling from a great producer, in a great vintage, from one of the Mosel’s great sites. Expect tons of energy and minerality, with just a touch of rounding on the edges courtesy of a few years in bottle.

Damijan Podversic Collio Kaplja 2005 $45
One of the great producers of skin-contact ‘orange’ wines in Friuli. A protégé of Gravner who has proven to have mastered a style all his own. This is one of the list's finer deals. As this category of wines grows in popularity so do the prices. You’re generally going to find this wine elsewhere at $60 or higher or retail at around $40 or more. Floral, salty, nutty, off-beat. Holy water for wine geeks.

Pisano Danila Rossese di Dolceacqua 2008 $42
Liguria’s red wines are still its best-kept secret. It’s a region known for both white grapes Pigato and Vermentino, but the local red grape, Rossesse, produces red wines with bracing acidity and a floral, savory edge. Danila Pisano is producing some of the most interesting renditions of this limited production grape.

Ca de Noci Sottobosco Frizzante 2007 $44
Another unlikely way to dodge the weighty red wine section: some uncommonly well-structured play on Lambrusco. It does not bear the Lambrusco name because the grapes (in this case, lambrusco grasparossa, lambrusco di montericco, malbo gentile, sgavetta) are grown outside the DOC. This spends 15 days on the skins and ferments naturally in the bottle. This is serious, don’t-want-to-meet-you-in-a-dark-alley side of Lambrusco and it demands meat. OR ELSE.

Under $40
Channing Daughters Ramato 2008 $38
Channing Daughters is easily the most adventurous winery out of New York. They do a number of skin fermented white wines, including this Ramato—the Friulian name for pinot grigio that has been fermented on its skins. Given that the grape is pink-skinned, the resulting wine, when kept in contact with the skins, turns a copper color. Spicy and fruity with a slight bit of oxidation.

Le Briseau You Are So Beautiful 2009 $37
One of several wines in Christian Chaussard’s line of charming and affordable “You Are So...” wines. Everything here is done with minimal manipulation and the wines tend toward a raw, charming sort of purity. This is 100% Pinot Noir from the Touraine. All bright, clean Pinot fruit with a tinge of funk.

Off The Beaten Path
Bedrock Wine Co. Heirloom Compagni Portis 2009 $48
Morgan Twain-Peterson’s Bedrock Wine Co. has made California’s historic heirloom vineyards its centerpiece. Twain-Peterson, the son of Ravenswood founder Joel Peterson, is part of a group that is trying to identify and protect vineyards like Compagni Portis. This is a 60-year-old vineyard that contains a field blend of gewurtztraminer, riesling, trousseau gris, berger, green hungarian, and more. It’s the last white vineyard of its kind in California. A treasure, particularly at $48.

Break The Bank
Henri Goutorbe Champagne Special Club 2002 $92
Champagne’s Special Club is a group of 26 Grower-Producers who are all dedicated to the expression of terroir in Champagne. The Special Club bottling, which comes in a very special bottle, is considered to be the best offering from each grower. Goutorbe’s ’02 is a blend of 70% pinot noir and 30% chardonnay and is in classic Goutorbe form is at once rich, highly aromatic, and structured for aging.

Gravner Anfora {Ribolla Gialla} 2002 $75
Josko Gravner is one of the most captivating artisan winemakers in all of Italy. This wine is exclusively vinified with extended skin contact in giant clay amphora buried in the ground (ancient Roman style). Tannic, earthy, savory and structured enough for meat. His orange wines remain the beacon for others making wine in this style. Enter with a sense of adventure. Pricing is below retail.

Zidarich Terrano Del Carso 2005 $81
Terrano grown in the Carso Valley’s limestone-rich soils lends itself to high acidity, great minerality and floral, peppery aromatics and it’s got enough structure to hang with the biggest hunk of beef you can throw at it. Zidarich is one of the Carso’s best artisan producers and this wine at this price is a great opportunity to understand the uniqueness of this grape from this particular place.

WTF?
While the Scholium Project wines are special and certainly deserve a place on any wine list showcasing California, but stacking a list this small with 12 wines from one producer means snagging space from at least a handful of alternative producers. Editing this down to a few favorites would not only be easier for the diner, but it’ll make space for greater diversity.
[Photo via Immaculate Infatuation]